Amount of dust blown across the West is increasing, says CU-Boulder study

The amount of dust being blown across the landscape has increased over the last 17 years in large swaths of the West, according to a new study led by the University of Colorado Boulder.

The escalation in dust emissions — which may be due to the interplay of several factors, including increased windstorm frequency, drought cycles and changing land-use patterns — has implications both for the areas where the dust is first picked up by the winds and for the places where the dust is put back down.

“Dust storms cause a large-scale reorganization of nutrients on the surface of the Earth,” said Janice Brahney, who led the study as a CU-Boulder doctoral student. “And we don’t routinely monitor dust in most places, which means we don’t have a good handle on how the material is moving, when it’s moving and where it’s going.” 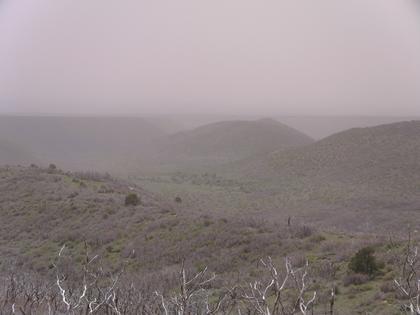 Based on anecdotal evidence, such as incidents of dust coating the snowpack in the southern Rockies and a seemingly greater number of dust storms noticed by Western residents, scientists have suspected that dust emissions were increasing. But because dust has not been routinely measured over long periods of time, it was difficult to say for sure.

“What we know is that there are a lot of dust storms, and if you ask people on the Western Slope of Colorado, or in Utah or Arizona, you’ll often hear them say, ‘Yeah, I grew up in this area, and I don’t remember it ever being like this before,’ ” said CU-Boulder geological sciences Associate Professor Jason Neff, Brahney’s adviser and a co-author of the paper. “So there is anecdotal evidence out there that things are changing, but no scientific data that can tell us whether or not that’s true, at least for the recent past.”

For the new study, recently published online in the journal Aeolian Research, the research team set out to determine if they could use calcium deposition as a proxy for dust measurements. Calcium can make its way into the atmosphere — before falling back to earth along with precipitation — through a number of avenues, including coal-fired power plants, forest fires, ocean spray and, key to this study, wind erosion of soils.

Brahney and her colleagues reviewed calcium deposition data from 175 NADP sites across the United States between 1994 and 2010, and they found that calcium deposition had increased at 116 of them. The sites with the greatest increases were clustered in the Northwest, the Midwest and the Intermountain West, with Colorado, Wyoming and Utah seeing especially large increases.

The scientists were able to determine that the increase was linked to dust erosion because none of the other possible sources of atmospheric calcium — including industrial emissions, forest fires or ocean spray — had increased during the 17-year period studied.

It’s also likely that the calcium deposition record underrepresents the amount of dust that’s being blown around, said Brahney, who is now a postdoctoral researcher at the University of British Columbia in Canada. That’s because the NADP network only measures dust that has collided with water in the atmosphere before precipitating to earth — not dust that is simply moved by the wind. And not all dust contains the same amount of calcium.

The increase in dust erosion matters, the researchers said, because it can impoverish the soil in the areas where dust is being lost. Wind tends to pick up the finer particles in the soils, and those are the same particles that have the most nutrients and can hold onto the most soil moisture, Brahney said.

Increasing amounts of dust in the atmosphere also can cause people living in the rural West a variety of problems, including poor air quality and low visibility. In extreme cases, dust storms have shut down freeways, creating problems for travelers.

The areas where the dust travels to are also affected, though the impacts are more mixed. When dust is blown onto an existing snowpack, as is often the case in the Rockies, the dark particles better absorb the sun’s energy and cause the snowpack to melt more quickly. But the dust that’s blown in also brings nutrients to alpine areas, and the calcium in dust can buffer the effects of acid rain.

In the future, researchers working in Neff’s lab hope to get a more precise picture of dust movement by measuring the dust itself. In the last five years, large vacuum-like measuring instruments designed specifically to suck in dust emissions have been installed at sites between the canyon lands of Utah and the Front Range of the Rockies. Once scientists have enough data collected, they’ll be able to look for trends in dust emissions without relying on proxies.

The study was funded by the National Science Foundation.