Despite the rapid retreat of Arctic sea ice in recent years, the ice may temporarily stabilize or somewhat expand at times over the next few decades, new research indicates.

Results of a study by scientists at the National Center for Atmospheric Research (NCAR) appear this week in the journal Geophysical Research Letters (GRL), published by the American Geophysical Union.

“As we learn more about climate variability, new and unexpected research results are coming to light,” says Sarah Ruth, program director in the Division of Atmospheric and Geospace Sciences, which funds NCAR for NSF. “What’s needed now are longer-term observations to better understand the effect of climate change on Arctic sea ice.”

The computer modeling study reinforces previous findings by other researchers that the level of Arctic sea ice loss observed in recent decades cannot be explained by natural causes alone, and that the ice will eventually melt away during summer if the climate continues to warm. 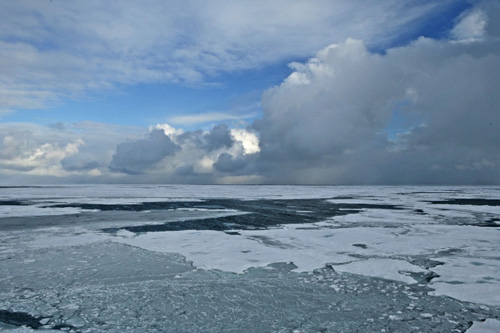 Scientists are finding some surprising results about sea ice in the Arctic. Image credit: NOAA

But in an unexpected new result, the NCAR research team found that Arctic ice under current climate conditions is as likely to expand as it is to contract for periods of up to about a decade.

“One of the results that surprised us all was the number of computer simulations that indicated a temporary halt to the loss of the ice,” says NCAR scientist Jennifer Kay, the lead researcher.

“The computer simulations suggest that we could see a 10-year period of stable ice or even a slight increase in the extent of the ice.

“Even though the observed ice loss has accelerated over the last decade, the fate of sea ice over the next decade depends not only on human activity but also on climate variability that cannot be predicted.”

Kay explains that variations in atmospheric conditions such as wind patterns could, for example, temporarily halt the sea ice loss. Still, the ultimate fate of the ice in a warming world is clear, she says. 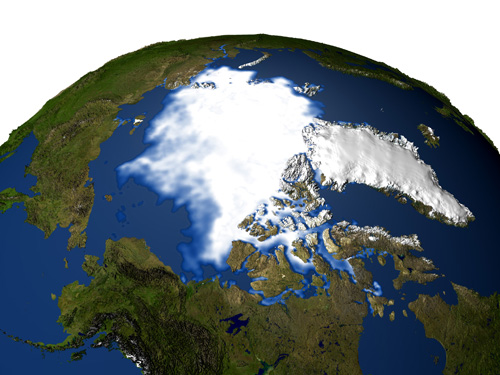 “When you start looking at longer-term trends, 50 or 60 years, there’s no escaping the loss of ice in the summer.”

Kay and her colleagues also ran computer simulations to answer a fundamental question: why did Arctic sea ice melt far more rapidly in the late 20th century than projected by computer models?

By analyzing multiple realizations of the 20th century from a single climate model, they attribute approximately half the observed decline to human emissions of greenhouse gases, and the other half to climate variability.

These findings point to climate change and variability working together equally to accelerate the observed sea ice loss during the late 20th century.

Since accurate satellite measurements became available in 1979, the extent of summertime Arctic sea ice has shrunk by about one third.

The ice returns each winter, but the extent shrank to a record low in September 2007 and is again extremely low this year, already setting a monthly record low for July.

Scientists warned just a few years ago that the Arctic could lose its summertime ice cover by the end of the century.

Some research has indicated that Arctic summers could be largely ice-free within the next several decades.

To simulate what is happening with the ice, the NCAR team used a newly updated version of one of the world’s most powerful computer climate models.

The software, known as the Community Climate System Model, was developed at NCAR in collaboration with scientists at multiple organizations and with funding by NSF and the Department of Energy.

The research team first evaluated whether the model was a credible tool for the study.

By comparing the computer results with Arctic observations, they verified that, though the model has certain biases, it can capture observed late 20th century sea ice trends and the observed thickness and seasonal variations in the extent of the ice.

Kay and her colleagues then conducted a series of future simulations that looked at how Arctic sea ice was affected both by natural conditions and by the increased level of greenhouse gases in the atmosphere.

The computer studies indicated that the year-to-year and decade-to-decade trends in the extent of sea ice are likely to fluctuate increasingly as temperatures warm and the ice thins.

“Over periods up to a decade, both positive and negative trends become more pronounced in a warming world,” says NCAR scientist Marika Holland, a co-author of the GRL paper.

The simulations also indicated that Arctic sea ice is equally likely to expand or contract over short time periods under the climate conditions of the late 20th and early 21st century.

Although the Community Climate System Model simulations provide new insights, the paper cautions that more modeling studies and longer-term observations are needed to better understand the impacts of climate change and weather variability on Arctic ice.

The authors note that it is also difficult to disentangle the variability of weather systems and sea ice patterns from the ongoing impacts of human emissions of greenhouse gases.

“The changing Arctic climate is complicating matters,” Kay says. “We can’t measure natural variability now because, when temperatures warm and the ice thins, the ice variability changes and is not entirely natural.”