An archaeological research team from North Carolina State University, the University of Washington and University of Florida has found one of the most diverse collections of prehistoric non-native animal remains in the Caribbean, on the tiny island of Carriacou. The find contributes to our understanding of culture in the region before the arrival of Columbus, and suggests Carriacou may have been more important than previously thought.

The researchers found evidence of five species that were introduced to Carriacou from South America between 1,000 and 1,400 years ago. Only one of these species, the opossum, can still be found on the island. The other species were pig-like peccaries, armadillos, guinea pigs and small rodents called agoutis. 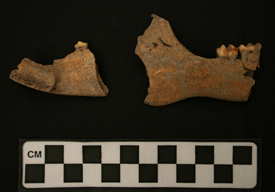 This peccary jaw is among the animal remains found at archaeological sites on Carriacou. Image credit: North Carolina State University

Researchers think the animals were used as sources of food. The scarcity of the remains, and the few sites where they were found, indicate that the animals were not for daily consumption. “We suspect that they may have been foods eaten by people of high status, or used in ritual events,” says Dr. Scott Fitzpatrick, an associate professor of anthropology at NC State and co-author of a paper describing the research.

“Looking for patterning in the distribution of animal remains in relation to where ritual artifacts and houses are found will help to test this idea,” said Christina Giovas, lead author and a Ph.D. student at the University of Washington.

The team, which also included Ph.D. student Michelle LeFebvre of the University of Florida, found the animal remains at two different sites on the island, and used carbon dating techniques to determine their age. The opossum and agouti were the most common, with the latter remains reflecting the longest presence, running from A.D. 600 to 1400. The guinea pig remains had the shortest possible time-frame, running from A.D. 985 to 1030.

These dates are consistent with similar findings on other Caribbean islands. However, while these species have been found on other islands, it is incredibly rare for one island to have remains from all of these species. Guinea pigs, for example, were previously unknown in this part of the Caribbean. The diversity is particularly surprising, given that Carriacou is one of the smallest settled islands in the Caribbean, though the number of remains is still not that large – a pattern seen on other islands as well.

This combination of small geographical area and robust prehistoric animal diversity, along with evidence for artifact trade with other islands and South America, suggests that Carriacou may have had some significance in the pre-Columbian Caribbean as a nexus of interaction between island communities.

The animal remains are also significant because they were found in archaeological digs at well-documented prehistoric villages – and the remains themselves were dated, as opposed to just the materials (such as charcoal) found near the remains.

“The fact that the dates established by radiocarbon dating are consistent with the dates of associated materials from the villages means the chronology is well established,” says Fitzpatrick, who has been doing research on Carriacou since 2003. “In the future we’d like to expand one of the lesser excavated sites to get more information on how common these species may have been, which could shed light on the ecological impact and social importance of these species prehistorically.”

The paper, “New records for prehistoric introduction of Neotropical mammals to the West Indies: evidence from Carriacou, Lesser Antilles,” is published online in the Journal of Biogeography and was co-authored by Fitzpatrick, Giovas and LeFebvre. The research was supported by the National Science Foundation, NC State, the University of Washington and the University of Florida.

NC State’s Department of Sociology and Anthropology is part of the university’s College of Humanities and Social Sciences.