PASADENA, Calif. – NASA’s new Aquarius instrument has produced its first global map of the salinity of the ocean surface, providing an early glimpse of the mission’s anticipated discoveries.

Aquarius, which is aboard the Aquarius/SAC-D (Satélite de Aplicaciones Científicas) observatory, is making NASA’s first space observations of ocean surface salinity variations — a key component of Earth’s climate. Salinity changes are linked to the cycling of freshwater around the planet and influence ocean circulation.

“Aquarius’ salinity data are showing much higher quality than we expected to see this early in the mission,” said Aquarius Principal Investigator Gary Lagerloef of Earth & Space Research in Seattle. “Aquarius soon will allow scientists to explore the connections between global rainfall, ocean currents and climate variations.” 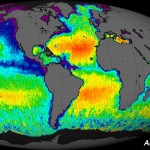 The new map, which shows a tapestry of salinity patterns, demonstrates Aquarius’ ability to detect large-scale salinity distribution features clearly and with sharp contrast. The map is a composite of the data since Aquarius became operational on Aug. 25. The mission was launched June 10 from Vandenberg Air Force Base in California. Aquarius/SAC-D is a collaboration between NASA and Argentina’s space agency, Comisión Nacional de Actividades Espaciales (CONAE).

To produce the map, Aquarius scientists compared the early data with ocean surface salinity reference data. Although the early data contain some uncertainties, and months of additional calibration and validation work remain, scientists are impressed by the data’s quality.

“Aquarius has exposed a pattern of ocean surface salinity that is rich in variability across a wide range of scales,” said Aquarius science team member Arnold Gordon, professor of oceanography at Columbia University in Palisades, N.Y., and at the university’s Lamont-Doherty Earth Observatory. “This is a great moment in the history of oceanography. The first image raises many questions that oceanographers will be challenged to explain.”

The map shows several well-known ocean salinity features such as higher salinity in the subtropics; higher average salinity in the Atlantic Ocean compared to the Pacific and Indian oceans; and lower salinity in rainy belts near the equator, in the northernmost Pacific Ocean and elsewhere. These features are related to large-scale patterns of rainfall and evaporation over the ocean, river outflow and ocean circulation. Aquarius will monitor how these features change and study their link to climate and weather variations.

Other important regional features are evident, including a sharp contrast between the arid, high-salinity Arabian Sea west of the Indian subcontinent, and the low-salinity Bay of Bengal to the east, which is dominated by the Ganges River and south Asia monsoon rains. The data also show important smaller details, such as a larger-than-expected extent of low-salinity water associated with outflow from the Amazon River.

The new map is available at: https://photojournal.jpl.nasa.gov/catalog/PIA14786 .