Columns of workers penetrate the forest, furiously gathering as much food and supplies as they can. They are a massive army that living things know to avoid, and that few natural obstacles can waylay. So determined are these legions that should a chasm or gap disrupt the most direct path to their spoils they simply build a new path — out of themselves.

Without any orders or direction, individuals from the rank and file instinctively stretch across the opening, clinging to one another as their comrades-in-arms swarm across their bodies. But this is no force of superhumans. These are army ants of the species Eciton hamatum, which form “living” bridges across breaks and gaps in the forest floor that allow their famously large raiding swarms to travel efficiently. 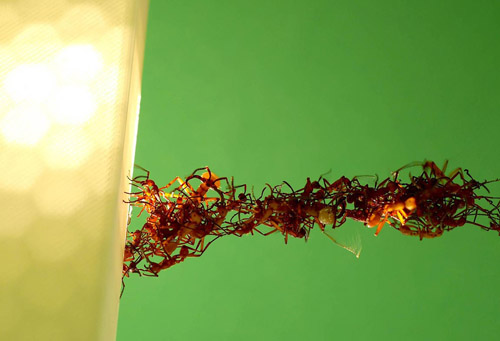 Researchers from Princeton University and the New Jersey Institute of Technology report for the first time that the “living” bridges that army ants of the species Eciton hamatum build with their bodies are more sophisticated than scientists knew. The ants use collective intelligence to automatically assemble when they detect congestion along their raiding trail, and disassemble when normal traffic has resumed. (Image courtesy of Matthew Lutz, Princeton University, and Chris Reid, University of Sydney)

Researchers from Princeton University and the New Jersey Institute of Technology (NJIT) report for the first time that these structures are more sophisticated than scientists knew. The ants exhibit a level of collective intelligence that could provide new insights into animal behavior and even help in the development of intuitive robots that can cooperate as a group, the researchers said.

Ants of E. hamatum automatically form living bridges without any oversight from a “lead” ant, the researchers report in the journal Proceedings of the National Academy of the Sciences. The action of each individual coalesces into a group that can adapt to the terrain and also operates by a clear cost-benefit ratio. The ants will create a path over an open space up to the point when too many workers are being diverted from collecting food and prey. 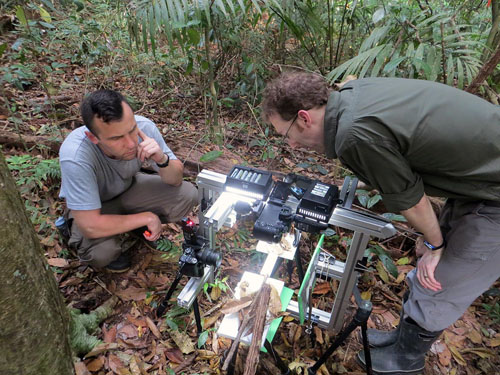 Co-first authors Matthew Lutz (left), a graduate student in Princeton’s Department of Ecology and Evolutionary Biology, and Chris Reid (right), a postdoctoral research associate at the University of Sydney who conducted the work while at the New Jersey Institute of Technology, carried out field experiments in Panama with a 1.5-foot-tall apparatus with ramps on both sides and arms in the center with which they could adjust the size of the gap. They inserted the apparatus into active army ant raiding trails and recorded how the ants crossed the gap. (Image courtesy of Matthew Lutz, Princeton University, and Chris Reid, University of Sydney)

“These ants are performing a collective computation. At the level of the entire colony, they’re saying they can afford this many ants locked up in this bridge, but no more than that,” said co-first author Matthew Lutz, a graduate student in Princeton’s Department of Ecology and Evolutionary Biology.

“There’s no single ant overseeing the decision, they’re making that calculation as a colony,” Lutz said. “Thinking about this cost-benefit framework might be a new insight that can be applied to other animal structures that people haven’t thought of before.”

The research could help explain how large groups of animals balance cost and benefit, about which little is known, said co-author Iain Couzin, a Princeton visiting senior research scholar in ecology and evolutionary biology, and director of the Max Planck Institute for Ornithology and chair of biodiversity and collective behavior at the University of Konstanz in Germany. 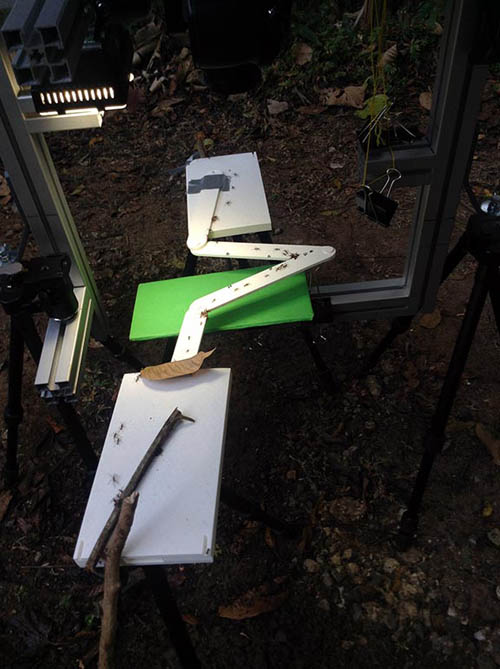 The researchers used their apparatus to observe how the ants formed bridges across gaps that were set at angles of 12, 20, 40 and 60 degrees. Twelve-degree angles shaved off the most distance while taking up the fewest workers. Sixty-degree angles had the highest cost-benefit ratio. (Image courtesy of Matthew Lutz, Princeton University, and Chris Reid, University of Sydney)

Previous studies have shown that single creatures use “rules of thumb” to weigh cost and benefit, said Couzin, who also is Lutz’s graduate adviser. This new work shows that in large groups these same individual guidelines can eventually coordinate group-wide, he said — the ants acted as a unit although each ant only knew its immediate circumstances.

“They don’t know how many other ants are in the bridge, or what the overall traffic situation is. They only know about their local connections to others, and the sense of ants moving over their bodies,” Couzin said. “Yet, they have evolved simple rules that allow them to keep reconfiguring until, collectively, they have made a structure of an appropriate size for the prevailing conditions.

“Finding out how sightless ants can achieve such feats certainly could change the way we think of self-configuring structures in nature — and those made by man,” he said.

Ant-colony behavior has been the basis of algorithms related to telecommunications and vehicle routing, among other areas, explained co-first author Chris Reid, a postdoctoral research associate at the University of Sydney who conducted the work while at NJIT. Ants exemplify “swarm intelligence,” in which individual-level interactions produce coordinated group behavior. E. hamatum crossings assemble when the ants detect congestion along their raiding trail, and disassemble when normal traffic has resumed.

The animation below shows how E. hamatum confronted a gap they encountered on an apparatus that Lutz and Reid built and deployed in the forests of Barro Colorado Island, Panama. Previously, scientists thought that ant bridges were static structures — their appearance over large gaps that ants clearly could not cross in midair was somewhat of a mystery, Reid said. The researchers found, however, that the ants, when confronted with an open space, start from the narrowest point of the expanse and work toward the widest point, expanding the bridge as they go to shorten the distance their compatriots must travel to get around the expanse.

“The amazing thing is that a very elegant solution to a colony-level problem arises from the individual interactions of a swarm of simple worker ants, each with only local information,” Reid said. “By extracting the rules used by individual ants about whether to initiate, join or leave a living structure, we could program swarms of simple robots to build bridges and other structures by connecting to each other.

“These robot bridges would exhibit the beneficial properties we observe in the ant bridges, such as adaptability to local conditions, real-time optimization of shape and position, and rapid construction and deconstruction without the need for external building materials,” Reid continued. “Such a swarm of robots would be especially useful in dangerous and unpredictable conditions, such as natural disaster zones.”

Radhika Nagpal, a professor of computer science at Harvard University who studies robotics and self-organizing biological systems, said that the findings reveal that there is “something much more fundamental about how complex structures are assembled and adapted in nature, and that it is not through a supervisor or planner making decisions.”

Individual ants adjusted to one another’s choices to create a successful structure, even though each ant didn’t necessarily know everything about the size of the gap or the traffic flow, said Nagpal, who is familiar with the research but was not involved in it.

“The goal wasn’t known ahead of time, but ’emerged’ as the collective continually adapted its solution to the environmental factors,” she said. “The study really opens your eyes to new ways of thinking about collective power, and has tremendous potential as a way to think about engineering systems that are more adaptive and able to solve complex cost-benefit ratios at the network level just through peer-to-peer interactions.”

Nagpal compared the ant bridges to human-made bridges that automatically widened to accommodate heavy vehicle traffic or a growing population. While self-assembling road bridges may be a ways off, the example illustrates the potential that technologies built with the same self-assembling capabilities seen in E. hamatum could have.

“There’s a deep interest in creating robots that don’t just rely on themselves, but can exploit the group to do more — and self-assembly is the ultimate in doing more,” Nagpal said. “If you could have small simple robots that were able to navigate complex spaces, but could self-assemble into larger structures — bridges, towers, pulling chains, rafts — when they face something they individually did not have the ability to do, that’s a huge increase in power in what robots would be capable of.”

The spaces the army ants bridge are not dramatic by human standards — small rifts in the leaf cover, or between the ends of two sticks. Bridges will be the length of 10 to 20 ants, which is only a few centimeters, Lutz said. That said, E. hamatum swarms form several bridges during the course of a day, which can see the back-and-forth of thousands of ants. The following video shows how many ants pass over a living bridge even as it is assembling.

“The bridges are something that happen numerous times every day. They’re creating bridges to optimize their traffic flow and maximize their time,” Lutz said.

“When you’re moving hundreds of thousands of ants, creating a little shortcut can save a lot of energy,” he said. “This is such a unique behavior. You have other types of ants forming structures out of their bodies, but it’s not such a huge part of their lives and daily behavior.”

The research also included Scott Powell, an army-ant expert and assistant professor of biology at George Washington University; Albert Kao, a postdoctoral fellow at Harvard who received his doctorate in ecology and evolutionary biology from Princeton in 2015; and Simon Garnier, an assistant professor of biological sciences at NJIT who studies swarm intelligence and was once a postdoctoral researcher in Couzin’s lab at Princeton.

To conduct their field experiments, Lutz and Reid built a 1.5-foot-tall apparatus with ramps on both sides and arms in the center with which they could adjust the size of the gap. They then inserted the apparatus into active E. hamatum raiding trails that they found in the jungle in Panama. Because ants follow one another’s chemical scent, Lutz and Reid used sticks and leaves from the ants’ trail to get them to reform their column across the device.

Lutz and Reid observed how the ants formed bridges across gaps that were set at angles of 12, 20, 40 and 60 degrees. They gauged how much travel-distance the ants saved with their bridge versus the surface area (in centimeters squared) of the bridge itself. Twelve-degree angles shaved off the most distance (around 11 centimeters) while taking up the fewest workers. Sixty-degree angles had the highest cost-benefit ratio. Interestingly, the ants were willing to expend members for 20-degree angles, forming bridges up to 8 centimeters squared to decrease their travel time by almost 12 centimeters, indicating that the loss in manpower was worth the distance saved.

Lutz said that future research based on this work might compare these findings to the living bridges of another army ant species, E. burchellii, to determine if the same principles are in action.