The agile creature repeatedly attacked and retreated, landing well-targeted, hatchet-like jabs to take down its prey, according to results of a new study published in August in the journal PLoS ONE.

The study is the first detailed look at the predatory style of a member of an extinct group of large, flightless birds known scientifically as Phorusrhacids but popularly labeled “terror birds” because of their fearsome skull and often imposing size.

Terror birds evolved about 60 million years ago in isolation in South America, an island continent until the last few million years, radiating into about 18 known species ranging in size up to the 7-foot-tall (2.1 meters) Kelenken.

Because terror birds have no close analogs among modern-day birds, their life habits have been shrouded in mystery, according to William Zamer, acting deputy director of the National Science Foundation (NSF)’s Division of Integrative Organismal Systems, which funded the research.

Now, a multinational team of scientists has performed the most sophisticated study to date of the form, function and predatory behavior of a terror bird, using CT scanning and advanced engineering methods.

“No one has ever attempted such a comprehensive biomechanical analysis of a terror bird,” said study lead author Federico Degrange of the Museo de La Plata/CONICET in Argentina.

“We need to figure out the ecological role these amazing birds played if we really want to understand how the unusual ecosystems of South America evolved over the past 60 million years.” 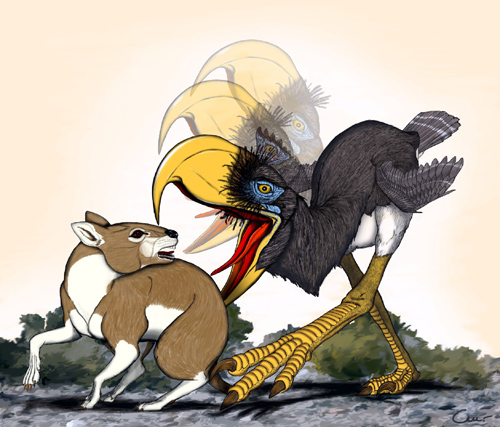 About the image: The terror bird Andalgalornis brings its powerful beak down in a hatchet-like jab to kill prey. Image credit: Marcos Cenizo

The terror bird under study is called Andalgalornis and lived in northwestern Argentina about six million years ago. It was a mid-sized terror bird, standing about 4.5 feet tall (1.4 meters) and weighing in at a fleet-footed 90 pounds (40 kg).

Like all terror birds, its skull was relatively enormous (14.5 inches or 37 centimeters) with a deep narrow bill armed with a powerful, hawk-like hook.

Paper co-author Lawrence Witmer of the Ohio University College of Osteopathic Medicine ran a complete skull of Andalgalornis through a CT scanner, giving the team a glimpse into the skull’s inner architecture.

The scans revealed to Witmer, Degrange and article co-author Claudia Tambussi, also from the Museo de La Plata/CONICET, that Andalgalornis was unlike other birds because it had evolved a highly rigid skull.

“Birds generally have skulls with lots of mobility between the bones, which allows them to have light but strong skulls,” said Witmer.

“But we found that Andalgalornis had turned these mobile joints into rigid beams. This guy had a strong skull, particularly in the fore-aft direction, despite having a curiously hollow beak.”

The evolution of this large and rigid bony weapon was presumably linked to the loss of flight in terror birds, as well as to their sometimes gigantic sizes.

From the CT scans, Stephen Wroe, director of the Computational Biomechanics Research Group at the University of New South Wales, Australia, assembled sophisticated 3-D models of the terror bird and two living species for comparison (an eagle, and the terror bird’s closest living relative, the seriema).

Using computers and software supplied by Wroe, Degrange and Karen Moreno of the Université Paul Sabatier in Toulouse, France, applied an approach known as Finite Element Analysis to simulate and compare the biomechanics of biting straight down (as in a killing bite), pulling back with its neck (as in dismembering prey) and shaking the skull from side to side (as in thrashing smaller animals, or when dealing with larger struggling prey). 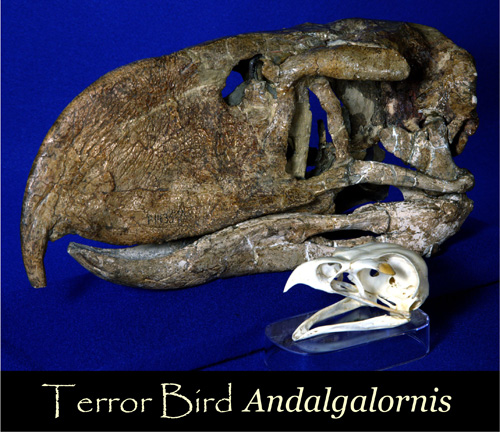 About the image: Fossil skull of the terror bird compared with the skull of a modern-day golden eagle for scale. Image credit: Witmer Lab

“Relative to the other birds considered in the study, the terror bird was well-adapted to drive the beak in and pull back with that wickedly recurved tip of the beak,” remarked Wroe, “but when shaking its head from side to side, its skull lights up like a Christmas tree.”

A key part of the analysis was determining how hard a bite Andalgalornis could deliver.

To examine bite force in birds in general, Degrange and Tambussi worked with zookeepers at the La Plata Zoo to get a seriema and an eagle to chomp down on their bite meter.

“We discovered that the bite force of Andalgalornis was a little lower than we expected, and weaker than the bite of many carnivorous mammals of about the same size,” Degrange said.

“Andalgalornis may have compensated for this weaker bite by using its powerful neck muscles to drive its strong skull into prey like an axe.”

The team’s results give new insight into the lifestyle of a unique avian predator.

Its skull, though strong vertically, was weak from side to side; its hollow beak was in danger of catastrophic fracture if Andalgalornis grappled too vigorously with large struggling prey.

Instead, the study shows that the terror bird engaged in an elegant style more like that of Muhammad Ali–a repeated attack-and-retreat strategy with well-targeted, hatchet-like jabs.

Once killed, the prey would have been ripped into bite-sized morsels by the powerful neck pulling the head straight back or, if possible, swallowed whole.

Feeding on a diversity of now-extinct mammals and competing with the likes of saber-tooth marsupials, terror birds became top predators in their environment.

At least one gigantic terror bird, Titanis, invaded North America about two to three million years ago, but shortly afterward, the animals disappeared from Earth.

The research also was funded by grants to Wroe from the Australian Research Council and the Australia and Pacific Science Foundation; and to Tambussi from the Fondo Nacional para la Investigación Científica y Tecnológica (Argentina).