A fossil unearthed in Great Britain may end a long-running debate about the mollusks, one of life’s most diverse invertebrate groups: Which evolved first, shelled forms like clams and snails, or their shell-less, worm-like relatives?

The small new fossil, found in marine rocks along the English-Welsh border, provides the best fossil evidence yet that the simpler worm-like mollusks evolved from their more anatomically complex shelled brethren, rather than the other way around.

The discovery reinforces previous findings from molecular sequencing studies and helps clarify the evolutionary relationships of mollusks, a broad category that includes not only oysters and mussels but also slugs, squids and octopuses.

“This is a kind of missing link with a worm-like body, bearing a series of shells like those of a chiton or coat-of-mail shell,” said Derek E. G. Briggs, director of the Yale Peabody Museum of Natural History and one of the paleontologists who studied the new fossil, Kulindroplax perissokomos. The researchers report their findings online Oct. 3 in the journal Nature. 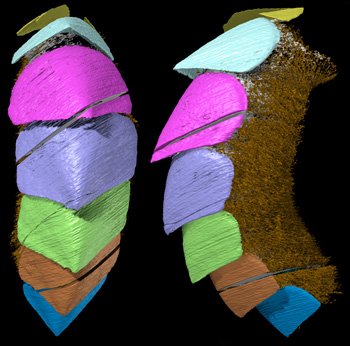 A small new fossil found in Great Britain provides the best fossil evidence yet that simpler worm-like mollusks evolved from their more anatomically complex shelled brethren, rather than the other way around. (Image by Mark Sutton)

The evolutionary relationships of worm-like mollusks, known as Aplacophora, has been a subject of controversy. Previously thought to be a product of the explosion of diversity during the early Cambrian period, they are now shown to have evolved probably 40-50 million years ago by losing shells like those on Kulindroplax.

Kulindroplax represents the first mollusk with an unambiguous combination of valves, or exterior shells, and a worm-like body, said Mark D. Sutton of Imperial College London, the paper’s lead-author.

The researchers found the specimen of Kulindroplax more than 10 years ago in the Herefordshire fossil deposit, a rich assemblage of ancient marine life forms more than 400 million years old. About 2 cm wide and 4 cm long, Kulindroplax was buried in volcanic ash deposited on the sea floor. The researchers later reconstructed its three-dimensional shape using computer software, revealing both form and structure in fine detail. In addition to its seven shells, Kulindroplax had a dense covering of spicules over the rest of the body, which it probably used to gain purchase as it crawled on the muddy sea bed.

Kulindroplax is coined from the Greek words for a cylinder and a plate, referring to the rounded body with its series of shells.

Support for the research was provided by the Natural Environmental Research Council.