*Todd Fletcher, an associate professor in the UA College of Education, puts his heart and soul into a life-changing community center that provides the perfect training ground for teachers.

Devoted to helping teachers improve the school experience for students, particularly special education English learners, Todd Fletcher is a man on a mission.

As part of that mission, a piece of Fletcher’s heart will always be more than 1,000 miles south of the University of Arizona, in rural Mexico.

Fletcher, who joined the UA’s College of Education faculty in 1985, has created an educational community center in a converted home that was once abandoned located in Cajones, Mexico, about 10 miles outside of Guanajuato.

For decades, Fletcher has led Verano en Mexico, a summer school program he created in 1987 for students in the College of Education. He was inspired to give back to the community that has been so hospitable to UA students and faculty. 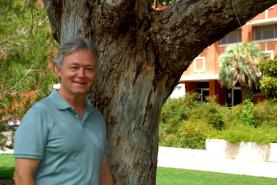 "One of the goals is to provide residents with what they need to stay in their communities," said Todd Fletcher, an associate professor in the UA College of Education who heads up efforts supporting teachers and communities in a rural town in Mexico. (Image credit: Jen Ryder)

In 2009, Resplandor International was born, chiefly out of Fletcher’s travels, including his summers in Mexico.

“I want to give students an opportunity to gain what I gained and to have the opportunity to transform their lives  personally and professionally,” said Fletcher, an associate professor in the UA department of disability and psychoeducational studies.

“It’s very powerful to work in the community, to work with families and feel like you are making a difference,” Fletcher added.

For the past three summers, faculty members and students from around the globe – and many from the UA – have traveled with Fletcher to Cajones, a lush Mexican community, but one with limited resources.

There, they formed close bonds with the children and families of the area, offering teachings on early childhood education, Earth sciences, cooking, guitar and Zumba.

Resplandor also serves as a rich training ground for teachers and professionals locally, nationally and internationally.

Arnulfo Velasquez, a teacher-in-residence in the UA’s College of Education who also sings with Arizona Opera, has spent two summers at Resplandor teaching guitar and singing to children and adults.

“It was a wonderful experience,” Velasquez said. “We were able to integrate music and sign language with some of the deaf kids in the community. It was tremendous.”

Velasquez credits Fletcher with having the vision to build a life-changing community center – and making it happen.

But how did Fletcher, a kid from Iowa, end up putting his heart and soul and a chunk of his savings into the home in a remote area, transforming it into Resplandor?

Fletcher spoke little Spanish when he enrolled at the University of the Americas, a bilingual school in Puebla, Mexico. There, he received his bachelor’s degree in education and, along the way, fell in love with Latin America.

“When I studied in Mexico, I got all of these wonderful experiences,” Fletcher said.

He ended up teaching in Nicaragua until political strife forced him to leave in 1978 for Oregon for more schooling. There, he met psychologist Richard Woodcock, who was looking for help in developing a psychoeducational test in Spanish.

Fletcher traveled to Peru, Costa Rica, Spain and Mexico to help develop an evaluation tool that would be appropriate for English-learning students in the U.S.

“I knew nothing about special education back then,” Fletcher recalled. He later conducted his dissertation research in Mexico City, working in public and private schools and comparing two psychological tests – in Spanish – used to measure cognitive abilities and academic achievement.

After receiving his doctorate in educational foundations and special education from Oregon State University, Fletcher joined the UA faculty to develop bilingual special education in response to a growing community need.

“This is kind of where bilingual education started,” said Fletcher, who also coordinates the specialty program in bilingual/multicultural special education in the UA department of disability and psychoeducational studies.

Today, it is one of only a handful of bilingual special education programs in the country.

“Bilingual special education really didn’t exist before this,” said Fletcher, who brought in distinguished scholars instrumental in helping him develop the course work.

Fletcher said English learners are often misdiagnosed as having special needs because of language and cultural  differences.

“These kids need to be better understood,” he said. “Teachers are not well prepared to understand the language  and cultural differences. This lack of understanding can be difficult to overcome.”

Fletcher also developed a core of four classes and received a federal grant to fund scholarships for students to be trained as bilingual special education teachers.

“It enabled students from diverse backgrounds who might otherwise not be able to access the university to come  here,” he said.

The UA has since graduated about 10 bilingual special education students each year. To complement what his students were learning in the classroom, Fletcher developed the five-week Verano en Mexico summer program.

He leads groups of students – from the occasional high school student to doctoral candidates – to Mexico City and Guanajuato to live with host families, meet with Mexican  education officials, spend time in schools and learn Spanish.

“They experience the culture firsthand,” Fletcher said, emphasizing the importance of that connection and the fact tat many local students come from schools in Mexico.

“The whole goal was to develop cultural competency. These are not simple students to work with, and the reality is that all teachers today have that population that they are working with,” Fletcher said, noting that teachers must also have strong assessment and instructional skills to aid their students.

“I didn’t know much about the education system in Mexico, especially special ed,” said Favela, who attended the  program in the late 1980s. “That was very helpful.”

Favela, who grew up along the U.S.-Mexico boarder in Nogales, Ariz., said she learned about where her students were coming from.

“Dr. Fletcher has mentored me and kept track of me,” Favela said. “We still collaborate. I have great regard and  admiration for his program.”

The UA community has supported the project through fundraisers and through faculty members and students who teach there. Also, Resplandor provides after-school programs and summer classes for children ages 4 to 16, as well as adults.

González said Fletcher’s classes, along with her summers at Resplandor, prepared her to teach.

“It’s really an honor more than anything to be part of the program. I am so grateful and blessed to be a part of it and to know these children and families,” said González, who taught reading and Zumba at Resplandor.

“He’s been a wonderful mentor,” she added. “As a teacher, I feel I have learned so much and I am more effective because of Dr. Fletcher and his classes.”