Research by experts at the University of Exeter has led to calls to create an international marine park to protect endangered sea turtles.

Scientists from the university’s Centre for Ecology and Conservation, based at its Cornwall Campus, worked with an international team to carry out satellite tracking of olive ridley sea turtles off the coast of Central Africa for the study.

Their results have revealed that existing protected areas may be inadequate to safeguard the turtles from fishing nets, as they spend most of their time outside the current protected area.

The study, which was published this week in the journal PLoS ONE, recommends that international marine parks off the coasts of Gabon and the Republic of the Congo are joined and extended to provide greater protection.

“The proposal to combine and extend the protected areas will be incredibly effective,” said Dr Brendan Godley, from the University of Exeter’s Centre for Ecology and Conservation. “We estimate that 97 percent of the most critical habitat for this population of olive ridley sea turtles would fall within the expanded park boundaries.” 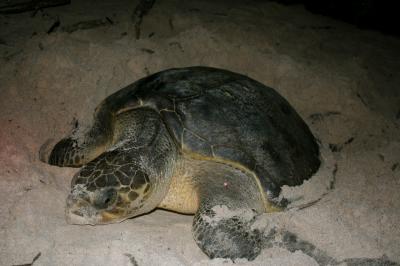 This is a nesting olive ridley sea turtle on the coast of Gabon. Researchers from the University of California-Santa Cruz, the Wildlife Conservation Society, and the University of Exeter have conducted the first comprehensive tracking study of olive ridleys to determine if current protection for the species in Central Africa is adequate. Image credit: Sara M. Maxwell

The study involved scientists from Exeter, the University of California Santa Cruz, the Wildlife Conservation Society, and others.

It involved the first comprehensive tracking study of olive ridley sea turtles during the nesting season, which brings the turtles close to the coastline and to the danger of being captured in fishing nets.

“Thousands of olive ridley sea turtles are caught every year in fishing nets along the coast of Central Africa, yet we previously had no understanding of their movements or what areas are critical to protect their populations,” said Sara Maxwell, who led the study as a graduate student at the University of California Santa Cruz.

The authors used satellite transmitters to follow 18 female turtles during their journeys ashore to lay eggs. Turtles were tagged in Mayumba National Park, a 900-square-kilometre marine protected area on the southern coast of Gabon. Mayumba National Park and Conkouati-Douli National Park just across the border in the Republic of Congo were created to protect both olive ridley and leatherback sea turtles from fishing nets, but dozens of dead olive ridley sea turtles have continued to wash up on the shores of the park every year. These deaths have perplexed park managers and resulted in mounting concern about the health of this threatened species.

“What we found, however, made sense. Turtles were regularly moving outside of the park boundaries where we believe they were encountering fishing nets and drowning, and later washing ashore where we would see them,” said Angela Formia of the Wildlife Conservation Society’s Ocean Giants Program.

The study revealed another critical finding: the tagged turtles spent more than half of their time in the Republic of Congo waters, highlighting the need for international cooperation to protect this species.

The Wildlife Conservation Society is now working in conjunction with the national park agencies of both countries to join and expand Mayumba and Conkouati-Douli National Parks, creating what is the first international marine park in this region of the world.

Studies such as this one highlight the critical importance of international cooperation in managing and protecting long-lived and migratory species such as sea turtles. This work also demonstrates the power of satellite tracking technology to show where animals are going and how to better protect them.

This study was made possible through funding and support of the Disney Worldwide Conservation Fund, the UK Darwin Initiative, the Tagging of Pacific Predators Project, UC Santa Cruz Center for Integrated Spatial Research, SEATURTLE.ORG, and the Gabon Sea Turtle Partnership, which is funded by the Marine Turtle Conservation Fund (United States Fish and Wildlife Service, U.S. Department of the Interior).