A new analysis of data from NASA’s Galileo spacecraft has revealed that beneath the surface of Jupiter’s volcanic moon Io is an “ocean” of molten or partially molten magma.

The finding, from a study published May 13 in the journal Science, is the first direct confirmation of such a magma layer on Io and explains why the moon is the most volcanic object known in the solar system. The research was conducted by scientists from UCLA, UC Santa Cruz and the University of Michigan–Ann Arbor.

“The hot magma in Io’s ocean is millions of times better at conducting electricity than rocks typically found on the Earth’s surface” said the study’s lead author, Krishan Khurana, a former co-investigator on Galileo’s magnetometer team and a research geophysicist with UCLA’s Institute of Geophysics and Planetary Physics. “Just like the waves beamed from an airport metal detector bounce off metallic coins in your pocket, betraying their presence to the detector, Jupiter’s rotating magnetic field continually bounces off the molten rocks in Io’s interior. The bounced signal can be detected by a magnetometer on a passing spacecraft.

“Scientists are excited that we finally understand where Io’s magma is coming from and have an explanation for some of the mysterious signatures we saw in some of Galileo’s magnetic field data,” Khurana added. “It turns out Io was continually giving off a ‘sounding signal’ in Jupiter’s rotating magnetic field that matched what would be expected from molten or partially molten rocks deep beneath the surface.”

Io’s volcanoes are the only known active magma volcanoes in the solar system other than those on Earth; Io produces about 100 times more lava each year than all of Earth’s volcanoes. While those on Earth occur in localized hotspots like the “Ring of Fire” around the Pacific Ocean, Io’s volcanoes are distributed all over its surface. A global magma ocean lying beneath about 20 to 30 miles (30 to 50 km) of Io’s crust helps explain the moon’s activity. 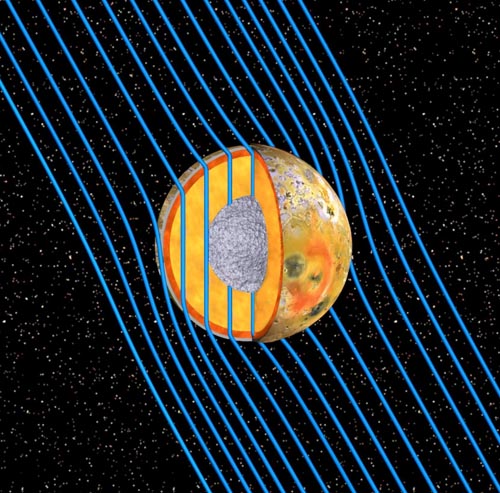 Internal structure of Jupiter's moon, Io. This graphic and the posted animation show the internal structure of Jupiter's moon Io as revealed by data from NASA's Galileo spacecraft. The low-density crust, about 20 to 30 miles thick, is shown in gray in the cross-section. The newly discovered subsurface ocean of molten or partially molten magma, also known as the asthenosphere, is shown in red-brown beneath the crust. This global magma layer is believed to be more than 30 miles thick, with the outer part making up at least 10 percent of the entire mantle by volume. The mantle has been colored gold in this graphic. Io is bathed in magnetic field lines (shown in blue) that connect the north polar region of Jupiter to the planet's south polar region. As Jupiter rotates, the magnetic field lines that drape around Io strengthen and weaken. Because Io's magma ocean has a high electrical conductivity, it deflects the varying magnetic field, shielding the inside of the moon from magnetic disturbances. The magnetic field inside of Io maintains a vertical orientation, even as the magnetic field outside of Io dances around. These variations in the external magnetic field signatures enabled scientists to understand the moon's internal structure. In the animation, the magnetic field lines move with Jupiter's rotation period of about 13 hours in Io's rest frame. Image credit: NASA/JPL/University of Michigan/UCLA

“It has been suggested that both the Earth and moon may have had similar magma oceans billions of years ago, at the time of their formation, but they have long since cooled,” said Torrence Johnson, who was Galileo’s project scientist, based at NASA’s Jet Propulsion Laboratory in Pasadena, Calif., and who was not directly involved in the study. “Io’s volcanism informs us how volcanoes work and provides a window in time to styles of volcanic activity that may have occurred on the Earth and moon during their earliest history.”

Io’s volcanoes were discovered by NASA’s Voyager spacecraft in 1979. The energy for the volcanic activity comes from the squeezing and stretching of the moon by Jupiter’s gravity as Io orbits the immense planet, the largest in the solar system.

Galileo was launched in 1989 and began orbiting Jupiter in 1995. After a successful mission, the spacecraft was intentionally sent into Jupiter’s atmosphere in 2003. The unexplained signatures appeared in the magnetic-field data taken from Galileo fly-bys of Io in October 1999 and February 2000, during the final phase of the mission.

“But at the time, models of the interaction between Io and Jupiter’s immense magnetic field, which bathes the moon in charged particles, were not yet sophisticated enough for us to understand what was going on in Io’s interior,” said study co-author Xianzhe Jia of the University of Michigan.

Recent work in mineral physics showed that a group of what are known as “ultramific” rocks become capable of carrying substantial electrical current when melted. These rocks are igneous in origin — that is, they are formed through the cooling of magma. On Earth, ultramific rocks are believed to derive from the mantle. The finding led Khurana and colleagues to test the hypothesis that the strange signature was produced by an electrical current flowing in a molten or partially molten layer of this kind of rock.

Tests showed that the signatures detected by Galileo were consistent with a rock like lherzolite, an igneous rock rich in silicates of magnesium and iron found, for example, in Spitzbergen, Sweden. The magma ocean layer on Io appears to be more than 30 miles (50 km) thick, making up at least 10 percent of the moon’s mantle by volume. The blistering temperature of the magma ocean probably exceeds 2,200 degrees Fahrenheit (1,200 degrees Celsius).

The Galileo mission was managed by the Jet Propulsion Laboratory (JPL), a division of the California Institute of Technology in Pasadena, for NASA.