Aerosols Control Rainfall in the Rainforest

A team of environmental engineers, who might better be called “archeologists of the air,” have, for the first time, isolated aerosol particles in near pristine pre-industrial conditions.

Working in the remote Amazonian Basin north of Manaus, Brazil, the researchers measured particles emitted or formed within the rainforest ecosystem that are relatively free from the influence of anthropogenic, or human, activity.

The finding, published in a paper in the Sept. 17 issue of the journal Science, could provide crucial clues to understanding cloud formation, determining the specific chemical differences between natural and polluted environments, and modeling how changes in the Amazon Basin might affect the regional and global atmosphere. 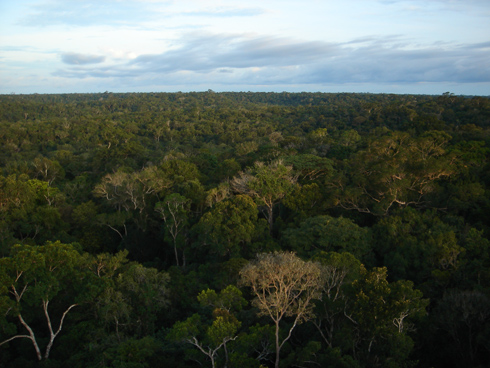 About the image: A view of the rainforest from the top of the research tower. Image credit: Delphine Farmer

“This study shows that in this very pristine environment, there is a close linkage between emissions from plants, aerosols, clouds, and precipitation,” says Anne-Marie Schmoltner of the National Science Foundation’s (NSF) Division of Atmospheric and Geospace Sciences, which funded the research.

“By doing a thorough chemical analysis of the aerosols in the Amazon region, this team could show that organic compounds can be predominant in the formation of atmospheric aerosols.”

“We basically had two ‘travel’ days’ worth of pure air movement over 1,600 kilometers before the air came to our measurement site,” says lead paper author Scot Martin, an environmental chemist in the Harvard School of Engineering and Applied Sciences. 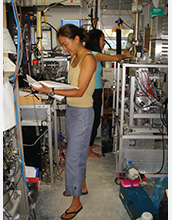 “By performing the study in the rainy season of central Amazonia (January-March), we avoided contamination. Well-known periods of burning and deforestation occur in the dry season and also largely on the southern edge of Amazonia.”

Sampling from a 40-meter high tower and using a range of techniques, the researchers detected and imaged atmospheric particles.

They found that particles in the submicron size regime most relevant to climate could be traced to the atmospheric oxidation of plant emissions, or so-called secondary organic aerosol droplets.

“It is a kind of liquid organic particle,” explains Martin. “This is the first time that anyone has ever imaged one of these particles in isolation, because in the Northern Hemisphere and other anthropogenic regions, when you collect a particle it is a mess and filled with soot, nitrates, and other pollutants.” 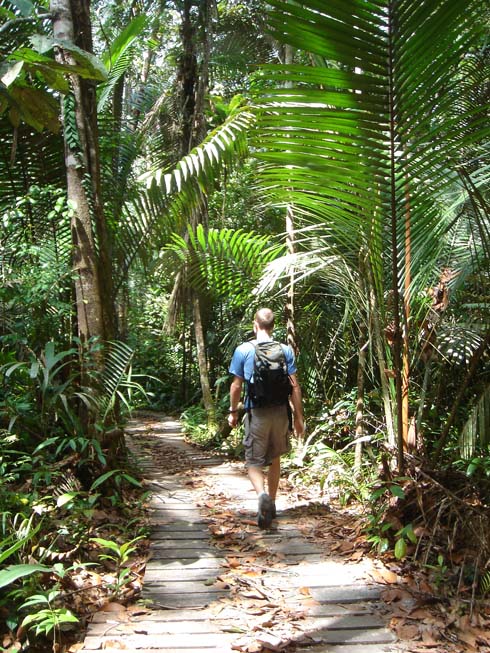 About the image: Scientist Joel Kimmel walks along the trail to the K34 tower. Image credit: Delphine Farmer

In the pristine Amazon Basin the scientists detected aerosol particle number concentrations of a mere several hundred per cubic centimeter.

By contrast, in heavily industrialized cities where most people live, particle concentrations are in the tens of thousands per cubic centimeter, making it impossible in these locations for climate scientists to measure any net change when additional particles, either natural or artificial, are added.

“Those particles are affecting cloud formation and cloud formation is affecting precipitation which is affecting the plants. This is what we call the great tropical reactor,” says Martin. “Everything is connected and in our research we finally had a real glimpse of natural aerosol-cloud interactions.”

In the atmosphere, gas-phase molecules emitted by plants are attacked by very specific molecules such as ozone or hydroxyl radicals that then change the chemical structure of the organic emissions by adding oxygen atoms. 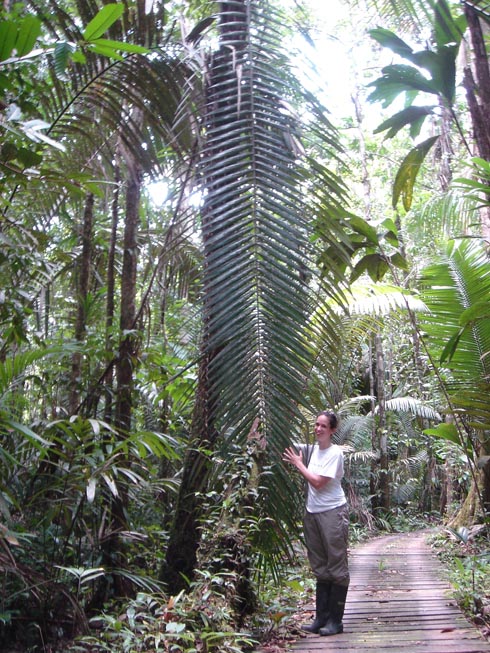 As a result, the gas-phase molecules become far less volatile and condense to form new particles or, alternatively, to grow pre-existing particles. These particles serve as the nuclei on which atmospheric water condenses as climate-important clouds form.

The cycle is well known, but the challenge has been how to create an accurate quantitative understanding of the sources of such aerosol particles.

The study represents an essential step towards providing a snapshot back in time as well as a baseline–pristine rainforest air prior to industrialization–to understand global climate change today.

“The new insights and data help us and our colleagues to understand and quantify the interdependence of the cycling of aerosols and water in the unperturbed climate system,” explains lead paper co-author Ulrich Pöschl, a scientist at the Max Planck Institute for Chemistry in Mainz, Germany.

“A thorough understanding of the unperturbed climate system is a prerequisite for reliable modeling and predictions of anthropogenic perturbations and their effects on global change.” 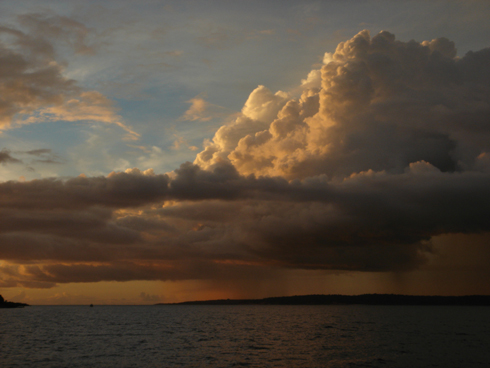 About the image: Sunset over the Rio Solimoes in the Amazon. Image credit: Delphine Farmer

The researchers were surprised to discover that the pure droplets dominated, comprising over 85 percent of the climate-relevant submicron particles in the air over the Basin.

The low aerosol concentrations and high amount of secondary organic particles may mean that the interplay among particles, clouds, and precipitation in more pristine climate systems is vastly different from those in marine and polluted regions.

As the Amazon Basin is going through a period of development, Brazilian co-author Paulo Artaxo says that scientists will now have an opportunity to watch the influence of human activity on the atmosphere in real time.

“In Brazil, we now have even more solid science to support sustainable development in the Amazonian region,” says Artaxo, a physicist at the University of São Paulo, Brazil.

“Looking ahead, we hope to clarify the mechanisms of how vegetation interacts with the atmosphere and elucidate the main natural feedbacks. Doing so will give us a way to monitor atmospheric change accurately in light of ongoing deforestation.”

“The ecosystem and the atmosphere are coupled in a feedback system,” says Delphine Farmer, a scientist at the University of Colorado, and a co-author of the paper.

“What we can say now is that the cloud droplet number over the Amazon rainforest is limited by aerosols,” says Jose-Luis Jimenez of the University of Colorado, also a co-author of the paper, “and the quantity of aerosols depends on how much organic material is released by the ecosystem.”

The research was also funded by the Humboldt Foundation (STM Research Fellowship), the Max Planck Society, the Office of Science of the U.S. Department of Energy, the Brazilian CNPq and FAPESP agencies (including FAPESP Visiting Scientist award to STM), the Large-Scale Biosphere Atmosphere Experiment in Amazonia (LBA), and the European integrated project on aerosol cloud climate and air quality interactions (EUCAARI).