Academics used to tease paleontologists, saying that while dinosaurs appeal to children, they won’t answer the important evolutionary questions.

Fifty years ago, in Feb. 1969, Ostrom, then an assistant professor of geology and geophysics at Yale, published a paper describing a previously unknown dinosaur he dubbed Deinonychus, meaning “terrible claw” in Greek. The paper reignited public interest in dinosaurs and upended common assumptions in the field. It also helped answer the question: Where do birds come from? 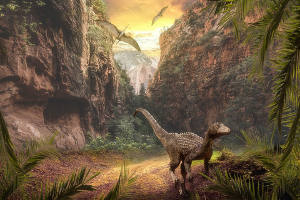 As an undergraduate student at Union College Ostrom was captivated by the works of George Gaylord Simpson, a paleontologist-turned-evolutionary biologist. Ostrom decided against entering medicine as his father had hoped, and instead pursued a Ph.D. at Columbia University to study with Simpson. In 1961, Ostrom joined Yale’s Department of Geology and Geophysics, and he remained there until his retirement in 1993, though he remained active in research and writing as an emeritus professor at Yale until 2001.

The name Deinonychus may not be familiar to non-scientists, but millions of people have seen one on the big screen. In the 1993 film “Jurassic Park” the murderous Velociraptors were, in fact, based on Deinonychus. (Real velociraptors were considerably smaller than the creatures in the film, about the same size as a turkey.)

Michael Crichton, the writer of the “Jurassic Park” novel on which the movie was based had been swept up in the “Dinosaur Renaissance” sparked by Ostrom’s discovery and the work of one of his students, Robert Bakker ’67, and the paleoartist Greg Paul in the 1970s and 1980s.

“I was in my office when the telephone rang one morning. ‘Professor Ostrom, this is Michael Crichton,’” the Yale professor recalled in 1997 while speaking to The New York Times. “And we had a very interesting conversation.”

While Crichton used the physical attributes and hypothesized behaviors described to him by Ostrom to describe the creatures in his novel, he opted for the more dramatic name “velociraptor.” “Jurassic Park” went on to become a pop culture juggernaut, inspiring a whole new generation to be captivated by dinosaurs and eager to study them.

Ostrom’s work didn’t just change how dinosaurs were perceived by the public, he also shifted the conventional wisdom in academia. According to Ostrom’s last graduate student and current Peabody Museum paleontologist, Daniel Brinkman ’94 M.Phil., “prior to Ostrom, dinosaurs were thought of as large, lumbering, cold-blooded, and slow-witted evolutionary failures.”

“The discovery of Deinonychus not only reshaped our understanding of dinosaurs, it recalibrated how we understand evolution. Darwin’s notion of steady, gradual change had led scientists to believe that dinosaurs must have been quite primitive in their behavior and cognitive ability. Deinonychus called this presumption into serious question. Half a century later, the way we conceive of prehistoric life is completely transformed,” explains David Skelly, director of the Yale Peabody Museum and the Frank R. Oastler Professor of Ecology.

The two observations led Ostrom to suggest that dinosaurs could have been warm-blooded. The paleontological community rallied to investigate the question.

Bakker, who had been a student of Ostrom and went on to be a renowned paleontologist in his own right, became one of the biggest proponents of this hypothesis and led the scientific debate for decades. Today, most scientists accept that dinosaurs were more metabolically active than present day reptiles, but caution against a simplistic view of warm or cold bloodedness.

Discovering Deinonychus also ressurrected the hypothesis that birds descended from dinosaurs. Back in the 1860s renowned biologist Thomas Henry Huxley had championed this idea. While describing the anatomy of fossilized bird remains he once remarked: “[If] found in the fossil state, I know not by what test they could be distinguished from the bones of a Dinosaurian.”

The similarities between the remains of both birds and dinosaurs also struck Ostrom in 1970 while he was visiting the Teylers Museum in the Netherlands.

As he was inspecting what was believed to be a pterodactyl, he had a startling realization. Through his intimate knowledge of Deinonychus and his keen eye, Ostrum recognized that the specimen was in fact a feathered bird. At that time he hypothesized that the specimen was of Archaeopteryx, a prehistoric bird. The incident sparked Ostrom’s curiosity and his focus shifted to the question of the evolutionary ancestry of birds.

Over the next decade, Ostrom published a series of papers that investigated the possible relationship between Deinonychus and Archaeopteryx. Out of that, he postulated that birds were direct descendants of the dinosaurs, rather than simply sharing a common ancestry. Further, he claimed that flight evolved when feathered dinosaurs flapped their arms in pursuit of prey. The scientific community was rocked by these hypotheses and a vigorous debate occurred in the succeeding decades.

By persevering in the face of difficult questions, Ostrom upended multiple core assumptions in paleontology, sparked a Jurassic renaissance, and inspired multiple generations to look at dinosaurs with wonder.

In one of Ostrom’s final papers, “How Bird Flight Might Have Come About,” he gives a “last word,” saying, “The missing, unknowable fossil record can never be allowed to stifle our curiosity.”

It certainly didn’t stifle his.