A world of art at the Watson Institute

As a student in the Brown/RISD Dual Degree Program, senior Youbin Kang uses textiles to bring attention to global issues. Her work hangs in the Watson Institute as part of a new initiative to showcase art by students, faculty, and staff.

PROVIDENCE, R.I. [Brown University] — Banglatie, a knit garment made by senior Youbin Kang, hangs on a wall of the Watson Institute, its form loosely resembling the shape of a person, with arms, legs, and feet dangling from the nails that hold it in place.

“One person can wear the whole thing or seven,” said Kang, counting the colorful pieces.

For Kang, a Brown/RISD Dual Degree Program student who is majoring in international relations and textiles, Banglatie not only showcases her mastery in knitting but also her interest in the garment industry, a topic that has touched her personally in more ways than one. 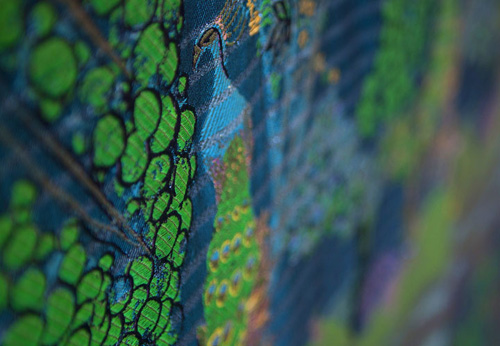 Youbin Kang: Midnight’s Children. Midnight’s Children is a woven tapestry that is a nod to Salman Rushdie’s book of the same name as well as to time Kang spent living in the country as a child. Image credit: Photos by Mike Cohea/Brown University

Kang spent the summer of 2011 interning in the merchandising and design offices of a garment factory in Bangladesh — “The biggest factory ever,” she said. Growing up in Korea, with family members who worked in factories, Kang has always been interested in how the industry influences the development of many Third World countries. Being immersed in the industry for those few months between her freshman and sophomore years had a profound effect on her.

“Bangladesh is a beautiful country and the people are really nice and it was an amazing place, but the poverty was very apparent. It was strange to see people sacrificing certain aspects of their life and freedom so that they can make money,” said Kang, who witnessed employee protests and saw firsthand the extent to which factory life dominates the culture there.

Returning to school in the fall, Kang had a hard time getting those images out of her mind and found herself filling her art class inspiration boards with pictures from her summer abroad. She eventually used that inspiration to create Banglatie as an end-of-year project.

“Throughout the semester I produced samples that were inspired by the pictures and colors and imagery from my trip. I had this idea of one outfit that connects several different people. It’s a way of showing how we are all connected by the process of making clothing,” Kang said. 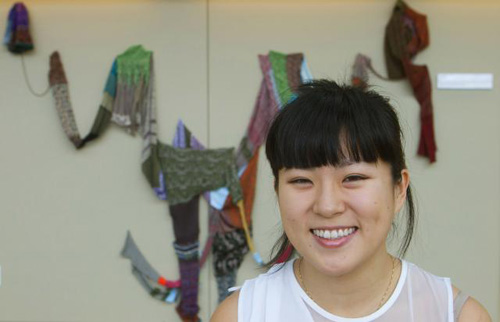 Youbin Kang and Banglatie. “I had this idea of one outfit that connects several different people. It’s a way of showing how we are all connected by the process of making clothing,” Image credit: Brown University

The artist statement that hangs below the piece, explains Kang’s thinking even further: “An invisible tie that includes the rules of supply and demand, global trade, the sewing line, and invisible networks wraps, binds, and connects people around the world. Everyone unknowingly lives Bangladesh.”

Kang, who spent part of her childhood in India and Egypt and counts those experiences as having influenced her initial desire to get into textiles, said that bringing her two majors together for this project was a natural fit.

“Being in textiles, it’s very easy to talk about textiles,” Kang said. 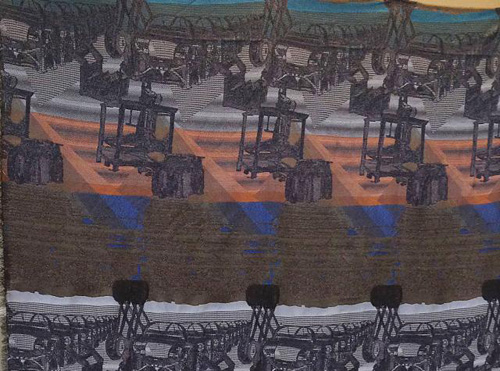 Youbin Kang: Untitled (detail). On display at the Watson Institute for International Studies: Art inspired by the global garment industry and a summer internship in Bangladesh. Image credit: Brown University

Richard Locke, director of the Watson Institute for International Studies and Kang’s adviser at Brown, agrees: “The work nicely blends together Youbin’s two passions: social justice and design. The themes, textures, and composition of Youbin’s pieces compel us to think hard about working conditions in garment factories in Bangladesh and elsewhere.”

Kang has two other pieces hanging on the third floor of Watson. Midnight’s Children is a woven tapestry that is a nod to Salman Rushdie’s book of the same name as well as to time Kang spent living in the country as a child.

“[Midnight’s Children] is one of my favorite books and I wanted to do a piece that was really really beautiful. It can be used to talk about democracy in India, but mostly the book and the magic of children’s imagination and how that relates to freedom and democracy,” said Kang.

Her third piece, Untitled, is a computer-generated jacquard woven with images of Industrial Revolution-era jacquard looms, and is Kang’s way of tying together modern technology with the start of industrialization.

Kang’s pieces are on display as part of new initiative, called Art at Watson, meant to showcase art by students, faculty and staff.

“A number of us at Watson were brainstorming about how we could make better use of all the incredible space we have at Watson, use it to make the place come alive, make the issues that are central to Watson’s mission — development, security, governance — visible throughout our beautiful building. Art at Watson is a vehicle through which we showcase art by members of our community while at the same time strengthening our role in the larger Brown community,” Locke said.

The first exhibition featured work by Abbott “Tom” Gleason, professor emeritus of history. Currently, in addition to Kang’s work, photographs by undergraduate and graduate students and faculty adorn the walls and will remain on exhibit through the spring semester.

Meanwhile, as her pieces hang at Watson, Kang is working on her thesis, which will explore the relationship between global production networks and working conditions in garment factories, while also assisting with the Brown Student Labor Alliance’s anti-sweatshop campaigns. She hopes that more people will begin to take notice of the issues she highlights in her work and art.

“Being in textiles and knowing the craft and the beauty of really well-made things, I think if people pay a little more attention to those networks and the connection they may have with someone who is really far away, it may change how they buy clothes and, eventually, how workers are treated.”