At the heart of the immune system that protects our bodies from disease and foreign invaders is a vast and complex communications network involving millions of cells, sending and receiving chemical signals that can mean life or death. At the heart of this vast cellular signaling network are interactions between billions of proteins and other biomolecules. These interactions, in turn, are greatly influenced by the spatial patterning of signaling and receptor molecules. The ability to observe signaling spatial patterns in the immune and other cellular systems as they evolve, and to study the impact on molecular interactions and, ultimately, cellular communication, would be a critical tool in the fight against immunological and other disorders that lead to a broad range of health problems including cancer. Such a tool is now at hand.

Researchers with the U.S. Department of Energy (DOE)’s Lawrence Berkeley National Laboratory (Berkeley Lab) and the University of California (UC) Berkeley, have developed the first practical application of optical nanoantennas in cell membrane biology. A scientific team led by chemist Jay Groves has developed a technique for lacing artificial lipid membranes with billions of gold “bowtie” nanoantennas. Through the phenomenon known as “plasmonics,” these nanoantennas can boost the intensity of a fluorescent or Raman optical signal from a protein passing through a plasmonic “hot-spot” tens of thousands of times without the protein ever being touched.

“Our technique is minimally invasive since enhancement of optical signals is achieved without requiring the molecules to directly interact with the nanoantenna,” Groves says. “This is an important improvement over methods that rely on adsorption of molecules directly onto antennas where their structure, orientation, and behavior can all be altered.”

About the video: An array of gold nanoantennas laced into an artificial membrane enhances the fluorescence intensity of three different molecules when they pass through plasmonic hot spots in the array. Watch for the blue, green and red flashes. The photobleaching at the end of each fluorescence event (white flashes) is indicative of single molecule observations.

Groves holds joint appointments with Berkeley Lab’s Physical Biosciences Division and UC Berkeley’s Chemistry Department, and is also a Howard Hughes Medical Institute investigator. He is the corresponding author of a paper that reports these results in the journal NanoLetters. The paper is titled “Single Molecule Tracking on Supported Membranes with Arrays of Optical Nanoantennas.” Co-authoring the paper were Theo Lohmuller, Lars Iversen, Mark Schmidt, Christopher Rhodes, Hsiung-Lin Tu and Wan-Chen Lin.

Gold triangle nanoparticles paired tip-to-tip in a bow-tie formation, serve as optical antennas. When a protein (green) bound to a fluorescently labeled SOS-catalyst passes through the the gaps between opposing tips of the triangles (plasmonic hot spots) fluorescence is amplified. Image credit: Berkeley Lab

Fluorescent emissions, in which biomolecules of interest are tagged with dyes that fluoresce when stimulated by light, and Raman spectroscopy, in which the scattering of light by molecular vibrations is used to identify and locate biomolecules, are work-horse optical imaging techniques whose value has been further enhanced by the emergence of plasmonics. In plasmonics, light waves are squeezed into areas with dimensions smaller than half-the-wavelength of the incident photons, making it possible to apply optical imaging techniques to nanoscale objects such as biomolecules. Nano-sized gold particles in the shape of triangles that are paired in a tip-to-tip formation, like a bow-tie, can serve as optical antennas, capturing and concentrating light waves into well-defined hot spots, where the plasmonic effect is greatly amplified. Although the concept is well-established, applying it to biomolecular studies has been a challenge because gold particle arrays must be fabricated with well-defined nanometer spacing, and molecules of interest must be delivered to plasmonic hot-spots.

“We’re able to fabricate billions of gold nanoantennas in an artificial membrane through a combination of colloid lithography and plasma processing,” Groves says. “Controlled spacing of the nanoantenna gaps is achieved by taking advantage of the fact that polystyrene particles melt together at their contact point during plasma processing. The result is well-defined spacing between each pair of gold triangles in the final array with a tip-to-tip distance between neighboring gold nanotriangles measuring in the 5-to-100 nanometer range.” 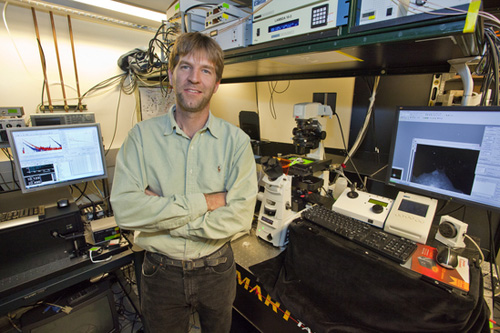 Until now, Groves says, it has not been possible to decouple the size of the gold nanotriangles, which determines their surface plasmon resonance frequency, from the tip-to-tip distance between the individual nanoparticle features, which is responsible for enhancing the plasmonic effect. With their colloidal lithography approach, a self-assembling hexagonal monolayer of polymer spheres is used to shadow mask a substrate for subsequent deposition of the gold nanoparticles. When the colloidal mask is removed, what remains are large arrays of gold nanoparticles and triangles over which the artificial membrane can be formed.

The unique artificial membranes, which Groves and his research group developed earlier, are another key to the success of this latest achievement. Made from a fluid bilayer of lipid molecules, these membranes are the first biological platforms that can combine fixed nanopatterning with the mobility of fluid bilayers. They provide an unprecedented capability for the study of how the spatial patterns of chemical and physical properties on membrane surfaces influence the behavior of cells. 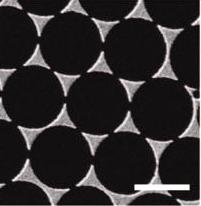 An array of gold nanoparticles in the shape of triangles that are paired in a tip-to-tip formation, like a bow-tie, can serve as optical antennas, capturing and concentrating light waves into well-defined hot spots, where the plasmonic effect is greatly amplified. (Image by Groves, et. al., Berkeley Lab)

“When we embed our artificial membranes with gold nanoantennas we can trace the trajectories of freely diffusing individual proteins as they sequentially pass through and are enhanced by the multiple gaps between the triangles,” Groves says. “This allows us to study a realistic system, like a cell, which can involve billions of molecules, without the static entrapment of the molecules.”

As molecules in living cells are generally in a state of perpetual motion, it is often their movement and interactions with other molecules rather than static positions that determine their functions within the cell. Groves says that any technique requiring direct adsorption of a molecule of interest onto a nanoantenna intrinsically removes that molecule from the functioning ensemble that is the essence of its natural behavior. The technique he and his co-authors have developed allows them to look at individual biomolecules but within the context of their surrounding community.

“The idea that optical nanoantennas can produce the kinds of enhanced signals we are observing has been known for years but this is the first time that nanoantennas have been fabricated into a fluid membrane so that we can observe every molecule in the system as it passes through the antenna array,” Groves says. “This is more than a proof-of-concept we’ve shown that we now have a useful new tool to add to our repertoire.”