What did you have for lunch yesterday? How many times a month do you eat nuts? How about your kids — how many servings of vegetables did they consume today?

It’s no secret that it is hard to recall the details of our meals, and that frustrating fact lies at the heart of nutrition research, complicating the task of linking foods to health outcomes like diabetes and heart disease. Some researchers look instead for telltale substances, or biomarkers, in the body that give information about how much of a certain type of food a person has eaten recently. But that solution isn’t ideal, as measuring biomarkers often requires blood, urine or even skin samples. The process can be costly, painful and cumbersome.

But for researchers who study fruits and vegetables in the diet, there may soon be an easier way. Yale School of Public Health scientists are testing a new technology that measures a biomarker by simply bouncing blue laser light off the skin. It is painless and fast and gives results in about a minute. Susan T. Mayne, head of the division of Chronic Disease Epidemiology, and her longtime collaborator, Brenda Cartmel, a research scientist in the same division, have worked with a group of physicists at the University of Utah to create and test two prototype devices that measure skin carotenoids, which are biomarkers for fruit and vegetable intake that are usually measured in the blood.

“It really derived from an observation that people have known about for decades,” says Mayne, “and that is that when people have high-vegetable diets they develop a yellow skin coloration that is particularly noticeable in the palm of the hand because of the accumulation of carotenoids in the skin. And we thought, ‘Can we use that as a new approach to measure carotenoids in the body noninvasively?’” 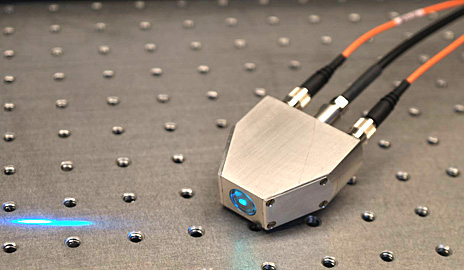 The device is a modern twist on a decades-old technology known as resonance Raman spectroscopy (RRS), which measures changes in energy levels of electrons in molecules after they have been excited by laser light. It consists of a flexible fiberoptic probe connected to a boxlike central machine; the probe is held against a study volunteer’s palm for about 30 seconds while the light interacts with carotenoids in the skin. Then software on an attached laptop processes the results, which takes another 30 seconds. Initial studies have shown that this RRS machine provides highly accurate results, attracting the attention of many nutrition researchers.

As a nutritional epidemiologist, Mayne had hardly expected to work with lasers. But several years ago, while on a flight to Australia for an international carotenoid conference, she found herself seated beside a man who was flipping through a program for the same conference. After exchanging a few pleasantries, Mayne learned he was a University of Utah laser physicist.

“I thought, ‘This is going to be a really long flight. I don’t think we have anything in common,’” she recalls. “But it was because we were stuck on an airplane for 16 hours [that] I tried to understand what he did, how he was using it [and] what the applications were. That’s actually where this whole project started.”

The physicist and his team, she learned, had been experimenting with RRS to measure carotenoids in the retina, since high retinal levels are thought to protect against macular degeneration. Carotenoids, Mayne notes, are perfectly suited to measurement by RRS. “If we use a specific wavelength of light, that’s where these particular compounds resonate very strongly and uniquely,” she says. “There aren’t other compounds in skin or other matrices that have the same resonance profile.”

By the time the plane had landed, Mayne and her seatmate had hashed out an idea for a grant proposal to collaborate. The grant was funded, the Utah group built two prototypes and Yale tested them.

In their study of the first prototype RRS device, published in 2010 in The American Journal of Clinical Nutrition, Mayne, Cartmel and their Utah colleagues compared skin carotenoid RRS measurements with serum and skin biopsy measurement methods, the current gold standard. (They also examined the device’s ability to measure lycopene, a carotenoid that the U.S. population gets primarily from tomatoes and tomato products.)

The team found that among study subjects, carotenoid levels as measured by RRS fell along a bell-shaped curve, as one would expect. Within a single individual, high measurements in one area of the body, such as the palm, matched high levels elsewhere. The RRS results also correlated reasonably well with gold standard methods as well as with dietary self-report data, confirming the device’s validity.

The Utah physicists are continuing to refine the early prototypes. “The original [argon-laser] device that we had was not portable,” says Cartmel, citing its 19- by 16- by 13-inch size and its sensitivity to movement and water vapor. “They then developed an instrument that uses a solid-state laser, so that is much more robust. Now we’re able to take that into the field.” In a study currently under review for publication, Stephanie Scarmo, a YSPH doctoral student, used the solid-state RRS device to obtain carotenoid measurements from a large group of 3- and 4-year-olds.

“She went into a preschool setting, trying to work around naptime,” says Mayne, and “was able to scan 60 kids in one afternoon.” (By contrast, the serum test method, as one might imagine, would have involved lots of blood, sweat and tears.) “I’m particularly interested in using this technology with kids because there’s so much interest in diet-related obesity in children.”

In the wake of the study’s publication, Mayne says that she’s been contacted by researchers wanting to use RRS as an objective measure in studies that encourage people to eat more fruits and vegetables. She understands their eagerness.

“It’s a very difficult thing to use self-report in the setting of dietary change when you’ve been working with people telling them they need to change,” she explains. Study subjects are inclined to try to please researchers by telling them that they’ve changed their ways for the better, introducing so-called social desirability bias into the studies.

But the Raman technique isn’t ready for prime time. For one thing, no one knows the half-life of carotenoids in skin, so just how many days’ or weeks’ intake a measurement reflects is unknown. For another, it’s not clear how well the device will pick up on changes in skin carotenoid levels after a change in fruit and vegetable intake.

What’s needed next, Mayne says, are “so-called metabolic studies, where they carefully control the dietary intake of carotenoids and track people over time to see how their skin responds, how quickly it responds, how much it changes and whether everybody changes similarly.” That kind of research is costly, involving many weeks of feeding people carotenoid-depleted and -enriched diets while repeating the measurements. To accomplish this, Mayne has partnered with a North Dakota U.S. Department of Agriculture lab that has the necessary testing facilities.

It’s important, too, to know how to factor in variations among individuals. “We still need to evaluate whether melanin, a skin pigment, has any effect on the readings,” notes Cartmel.

What does the future hold for the RRS approach in dietary research? Once the kinks are worked out, and after researchers verify associations between skin carotenoids and health outcomes, the RRS device could provide objective feedback about a person’s nutritional status.

The device could even find its way into urban policy work. If an inner city introduces neighborhood farmers’ markets offering fresh produce, for example, researchers could measure residents’ skin carotenoids before and after the markets appear. Measurements with RRS, says Mayne, “might provide some tools for assessing whether the intervention is improving vegetable intake in a particular area.” That’s really the ultimate goal, she says. “We want to improve nutritional status.”