The process represents a fundamentally different approach to synthesizing alkaloids, which are naturally occurring compounds that contain nitrogen. The new approach uses a set of starting materials that do not require the usual tempering of nitrogen’s reactive tendencies.

“We unmask the nitrogen in the last step,” said Seth Herzon, a Yale chemistry professor and co-author of a new study in the journal Nature. “Using this approach, we’re able to streamline the synthesis in ways that are otherwise not possible. It’s a huge time saver.” 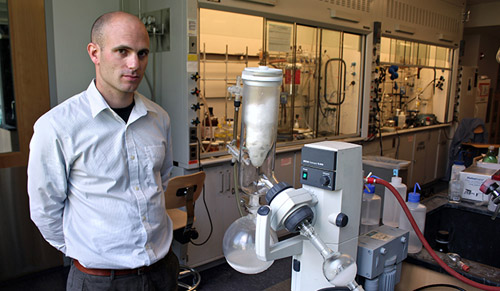 Seth Herzon in his lab, where he conducts extensive research on natural products synthesis and the development of new synthetic methods. (Photo by Michael S. Helfenbein, Yale University)

The new process highlighted in Nature produces a synthetic version of the anti-HIV chemical batzelladine B, which is found naturally in a bright red sponge in the Caribbean. Batzelladine B shows promise as an inhibitor of HIV viral entry, one of the first steps in the development of HIV infections.

In this case, the researchers used aromatic nitrogen heterocycles — a less reactive material — as a starting point. This opened the way to apply novel strategies for synthesis. For example, Herzon said, his team was able to pursue a number of highly complex reactions, or transformations, within a single step of the process. One step included a cascade of 10 distinct chemical transformations.

“We went for a home-run approach,” Herzon said. “Our results bring us to the natural product in a minimal number of steps.”

The process might be adapted to synthesize other compounds, as well. Herzon said his team has identified at least a dozen other alkaloids as candidates, including anti-cancer, anti-microbial, and other anti-HIV compounds.