A Hands-on Approach to Treating Patients with Pulmonary Disease

The team from MSU’s College of Osteopathic Medicine will apply four osteopathic manipulative treatments to a group of patients with moderate to severe chronic obstructive pulmonary disease. One of the most common lung diseases, COPD typically manifests as chronic bronchitis (a long-term cough with mucus) or emphysema (destruction of the lungs over time).

The goal, said lead researcher and associate professor Sherman Gorbis, is to attempt to determine the biochemical changes in patients’ blood following osteopathic manipulation, a treatment where a physician uses his or her hands to diagnose and treat patients.

Osteopathic manipulative treatments have been used throughout the United States since the late 1800s. The techniques can be used to alleviate pain, restore range of motion and enhance the immune system. 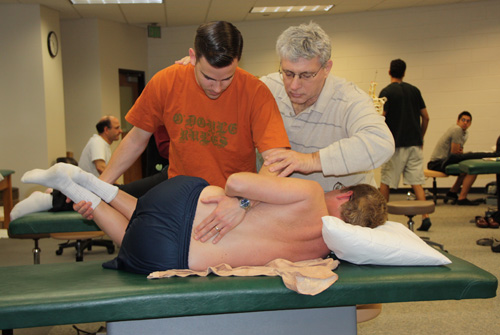 Sherman Gorbis (right), associate professor in the College of Osteopathic Medicine, trains a medical student how to perform an osteopathic manipulative treatment on a patient. Photo by Ann Cook

However, Gorbis said, much of the evidence of the treatments’ success has been anecdotal.

“That’s what makes this project exciting,” Gorbis said. “This will be one of the first studies to attempt to correlate treatment to pulmonary function and biochemical markers.

“If we can demonstrate that certain biochemical markers are enhanced with osteopathic manipulative treatment and show patients have increased pulmonary function, this could become a powerful teaching tool.”

The study is being paid for with a nearly $100,000, two-year grant from the American Osteopathic Association in partnership with the Osteopathic Heritage Foundation. 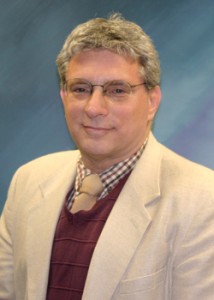 As patients join the trial, which will last 12 weeks for each enrollee, they will have blood drawn every two weeks. Those draws will be analyzed and measured. About 60 patients will take part over the two-year trial.

“By learning if certain biomarkers in the blood and plasma are enhanced in the group receiving the manipulation treatment, we hope to identify the physiological changes occurring among the patients,” said Gorbis, who noted patients also will undergo exercise tolerance tests and complete questionnaires during the trial.

A successful pilot project will allow the team to seek funding from the National Institutes of Health to recruit larger numbers of patients in a multi-center trial.