A class of chemical compounds best known today for fragrance and flavor may one day provide the clean, green and renewable fuel with which truck and auto drivers fill their tanks. Researchers at the U.S. Department of Energy’s Joint BioEnergy Institute (JBEI) have engineered Escherichia coli (E. coli) bacteria to generate significant quantities of methyl ketone compounds from glucose. In subsequent tests, these methyl ketones yielded high cetane numbers – a diesel fuel rating comparable to the octane number for gasoline – making them strong candidates for the production of advanced biofuels.

“Our findings add to the list of naturally occurring chemical compounds that could serve as biofuels, which means more flexibility and options for the biofuels industry,” says Harry Beller, a JBEI microbiologist who led this study. “We’re especially encouraged by our finding that it is possible to increase the methyl ketone titer production of E. coli more than 4,000-fold with a relatively small number of genetic modifications.”

Beller directs the Biofuels Pathways department for JBEI’s Fuels Synthesis Division, and also is a senior scientist with the Earth Sciences Division of Lawrence Berkeley National Laboratory (Berkeley Lab). He is the corresponding author of a paper describing this work titled “Engineering of Bacterial Methyl Ketone Synthesis for Biofuels,” which was published in the journal Applied and Environmental Microbiology. Co-authoring this paper were Ee-Been Goh, who is the first author on the paper, plus Edward Baidoo and Jay Keasling. 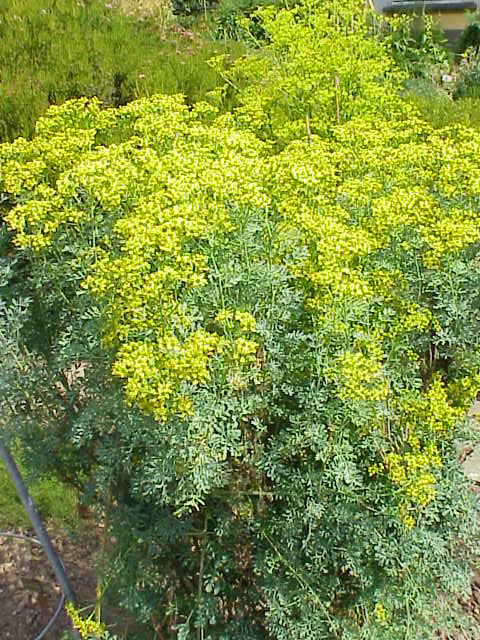 Methyl ketones were discovered more than a century ago in the aromatic evergreen rue plant. They are now used to provide scents in essential oils and flavoring in cheese, but JBEI research shows they could also serve as advanced biofuels. Image credit: Kurt Stüber (Wikimedia Commons)

Advanced biofuels – liquid transportation fuels derived from the cellulosic biomass of perennial grasses and other non-food plants, as well as from agricultural waste – are highly touted as potential replacements for gasoline, diesel and jet fuels. Equally touted is the synthesis of these fuels through microbes that digest the biomass and convert its sugars into fuel molecules. At JBEI, researchers are focusing on developing advanced biofuels that can be used in today’s engines and distribution infrastructures. In previous research, Beller and his colleagues engineered E. coli with special enzymes to synthesize from fatty acids long-chain alkene hydrocarbons that can be turned into diesel fuel. Fatty acids are the energy-rich molecules in bacterial and plant cells that have been dubbed nature’s petroleum.

“In those studies, we noticed that bacteria engineered to produce unnaturally high levels of fatty acids also produced some methyl ketones,” Beller says. “When we tested the cetane numbers of these ketones and saw that they were quite favorable, we were prompted to look more closely at developing methyl ketones as biofuels.” 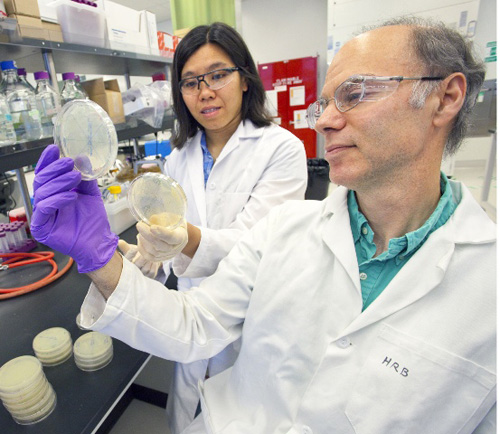 Methyl ketones are naturally occurring compounds discovered more than a century ago in the aromatic evergreen plant known as rue. Since then they’ve been found to be common in tomatoes and other plants, as well as insects and microorganisms. Today they are used to provide scents in essential oils and flavoring in cheese and other dairy products. Although native E. coli make virtually undetectable quantities of methyl ketones, Beller and his colleagues were able to overcome this deficiency using the same tools of synthetic biology they used to engineer high fatty acid-producing E.coli.

“For methyl ketone production, we made two major modifications to E. coli,” Beller says. “First we modified specific steps in beta-oxidation, the metabolic pathway that E. coli uses to break down fatty acids, and then we increased the expression of a native E. coli protein called FadM. These two modifications combined to greatly enhance the production of methyl ketones.”

Beller and his colleagues tested two methyl ketones for cetane numbers – undecanone and tridecanone. The cetane number is a measure of ignition delay during compression ignition; a higher number indicates a shorter ignition delay period and is more favorable than a lower number. In the United States, diesel fuel must have a minimum cetane number of 40. The cetane number for undecanone was 56.6. The number for a 50/50 mix of undecanone and tridecanone was 58.4 Despite this impressive performance, there was a concern that both these methyl ketones have a relatively high melting point, which is a disadvantage for cold-temperature fuel properties.

“We were able to mitigate the melting point problem in our best producing strains of E.coli by increasing the percentage of monounsaturated methyl ketones, which have much lower melting points than their saturated homologs,” Beller says.

For the next step, Beller and his colleagues will focus on increasing production and optimizing fuel properties of the methyl ketones by modulating their composition with respect to chain length and degree of unsaturation.

This research was supported by JBEI through the DOE Office of Science.