Sure, many bacteria cause disease, but most people don’t realize how beneficial they can be. The human gut, for example, brims with bacteria that play critical roles in everything from immune system development and extracting energy from food to providing necessary nutrients.

They get a nice comfy home living inside people, and in return they help us. It’s a symbiotic relationship. However, these beneficial partnerships are nothing compared to the complex relationships between bacteria and citrus mealybugs recently discovered by a team of biologists led by former UA researcher John McCutcheon, who recently took a position as an assistant professor at the University of Montana. 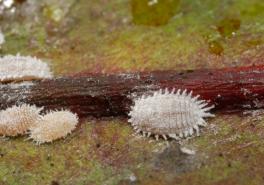 Mealybugs, so named because of their powdery white appearance and seen here sucking sap from the leaf of a Croton plant, are common pest of plants. (Photo: Lyle Buss, University of Florida)

The researchers had previously learned that one of the beneficial bacterial partners, Moranella, lives inside another bacterial symbiont called Tremblaya, which in turn lives inside the cytoplasm of the host insect cell.

“It’s the only bacteria-within-a-bacterium symbiosis known,” said McCutcheon, who did a large part of the research as a postdoctoral fellow in the UA’s department of ecology and evolutionary biology. “It’s a level of intimacy and partnership never seen before between two bacterial species.”

McCutcheon’s work and that of his research partner, Utah State University’s Carol von Dohlen, will be published in the Aug. 23 issue of Current Biology. The article is titled “An interdependent metabolic patchwork in the nested symbiosis of mealybugs.”

McCutcheon said animal metabolism is extremely limited when compared to bacteria. At some point during the evolution of the lineage leading to animals, the ability to make 10 of 20 essential amino acids and several vitamins was lost, so animals must acquire those in their diets.

Sap-feeding insects eat only plant sap, which doesn’t contain enough amino acids and other important compounds to support animal growth. What these insects have done is develop incredibly elaborate symbioses with bacteria to provide them with the nutrients that are limited by their diet.

“Some sap-feeding insects form stable relationships with one, two or even sometimes more symbionts to provision them with essential amino acids,” McCutcheon said. “These bacteria live only within special insect cells, which form special organs in the insect exclusively to house these bacteria.”

With the bacteria in the mealybugs, the researchers found an amazing metabolic patchwork in a pattern never seen before.

“For an organism to produce an amino acid, some number of enzymes are required in a certain linear order, which form biochemical pathways,” he said. “In previous dual-symbiont systems we’ve studied, all of the enzymes in a certain pathway are always found either in one of the bacterial symbionts or the other, never in both.

“In the mealybug, we’ve found an amazing patchwork pattern in several amino acid pathways, where some enzymes in a single linear pathway are encoded in Tremblaya, and some are encoded in Moranella,” McCutcheon said.

“It’s an unprecedented organization, and frankly it’s a bit hard to understand how the whole thing works, but it clearly does. We think this crazy metabolic organization is the result of the nested structure of the symbiosis,” he added. “There are several signals indicating that the whole system has moved from just a couple of bacteria working together to something more akin to a mosaic between the organisms.”