These slow-growing, long-living animals thrive in very deep waters—300 meters (984 feet) and deeper—yet scientists say they are sensitive to what is happening in the surface ocean as well as on the sea floor.

“The fact that the animals live continuously for thousands of years amazes me,” said Dr. Nancy Prouty of the U.S. Geological Survey Pacific Coastal and Marine Science Center, who analyzed the coral samples that were collected by the USGS and colleagues as part of several ongoing deep-sea coral ecosystem studies between 2003 and 2009. “Despite living at 300 meters and deeper, these animals are sensitive to what is going on in the surface ocean because they are feeding on organic matter that rapidly sinks to the sea floor. Since longevity is a key factor for population maintenance, recovery from a disturbance to these ecosystems, natural or manmade, may take decades to centuries.”

Reliably age dating the corals, as done in the recent study, is a critical step in using them as natural archives of environmental change.

Like shallow-water coral reefs, deep-sea coral-reef ecosystems are among the most diverse and productive communities on Earth, providing shelter and feeding grounds for commercial and non-commercial fish species and their prey, as well as breeding and nursery areas. Activities that affect both the seafloor and the surface ocean, such as certain methods of petroleum exploration and commercial fishing, can impact these ecosystems. 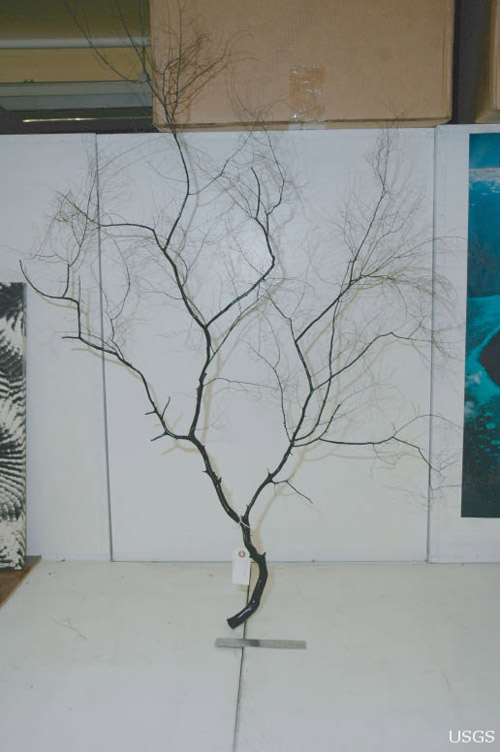 “We used a manned submersible, the Johnson-Sea-Link, to go to the sea floor and specifically collect certain samples using the sub’s manipulator arms,” said Prouty. “Deep-sea black corals are a perfect example of ecosystems linked between the surface and the deep ocean. They can potentially record this link in their skeleton for hundreds to thousands of years.”

The skeletons that these animals secrete continuously over hundreds to thousands of years offer an unprecedented window into past environmental conditions. Age dating used in combination with emerging technologies, such as sampling skeletal material with a laser to determine its chemical composition, enables scientists to reconstruct environmental conditions in time slices smaller than a decade over the last 1,000 to 2,000 years.

Black corals grow in tree- or bush-like forms. Scientists confirmed that black corals are the slowest growing deep-sea corals. They grow 8 to 22 micrometers per year as compared to the shallow-water reef-building coral, typically found in tropical areas like Hawai‘i, which grows about 1 mm per year, or 65 times as fast as black coral. Human fingernails grow about 3 mm per year, or 200 times faster than black coral. 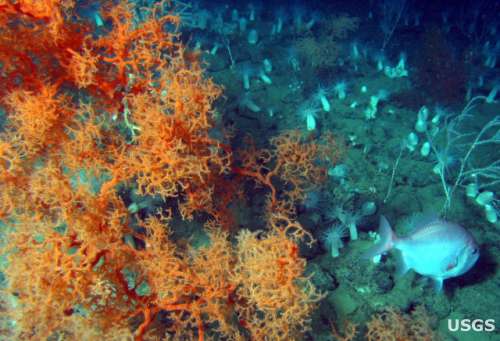 Because black corals get their food from sinking organic matter instead of from symbiotic algae, like their shallow-water counterparts, they need skeletons that are flexible but strong enough to withstand currents that transport food to the colonies. In addition to a constant flow of water bringing them food and oxygen, the corals require a stable substrate, such as volcanic or calcareous rock, or even a shipwreck or oil rig that can serve as a platform for the corals to settle on and build their skeletons.

Black corals can capture and record in their skeletons the history of changing concentrations of carbon in surface waters and the atmosphere. Unlike the skeletons of most shallow-water corals, which consist of calcium carbonate, black coral skeletons are composed mainly of organic matter: successive layers of protein and chitin (a long molecule containing carbon, oxygen, hydrogen, and nitrogen) glued together by a cement layer. These skeletons are very similar to insect cuticles in that they are quite flexible and can thus bend in water currents.

“The flexibility and shiny luster of black coral have made it a precious commodity in the coral jewelry trade and international trade is regulated by the Convention on International Trade in Endangered Species of Wild Fauna and Flora,” noted Prouty. “In fact, black corals have been harvested for centuries to create charms; the scientific name of the order to which black corals belong, ‘Antipatharia,’ comes from Greek roots meaning ‘against suffering.’”

Like trees, black corals exhibit radial growth, with the oldest skeletal material found in the center and successfully younger material building out toward the edge. Viewed in a horizontal cross section, the black coral’s growth bands resemble tree rings.

USGS scientists and their colleagues, for example, are measuring trace metals and stable isotopes in the black coral skeleton that are related to nutrient supply in surface waters, which in turn may reflect the amount of runoff from nearby land surfaces. With a proper understanding of how these chemical constituents vary over time, scientists can reconstruct a record of environmental changes, such as changes in land-based sources of nutrients and natural variations in climate.

The recent study was part of the USGS Diversity, Systematics, and Connectivity of Vulnerable Reef Ecosystems (DiSCOVRE) Expedition, in which USGS scientists are partnering with other federal agencies, such as the Bureau of Ocean Energy Management, Regulation and Enforcement and the National Oceanic and Atmospheric Administration, as well as several academic institutions, to study deep-sea coral reefs. A full copy of the study can be found online in the Feb. 10, 2011, edition of “Marine Ecology Progress Series.”

An upcoming DiSCOVRE expedition scheduled for summer 2011 will include mapping the sea floor and studying underwater canyons off the coasts of Maryland and Delaware. More information about the deep-sea cruises can be found on the USGS Southeast Ecological Science Center website.