COLUMBIA, Mo. – University of Missouri engineers and their research collaborators at Nanova, Inc. are one step closer to a painless way to replace fillings. After favorable results in the lab, human clinical trials are underway on the “plasma brush.”

“There have been no side effects reported during the lab trials, and we expect the human trials to help us improve the prototype,” said Qingsong Yu, associate professor of mechanical and aerospace engineering of MU, and Meng Chen, chief scientist from Nanova, Inc., which holds a co-patent for the plasma brush with MU. 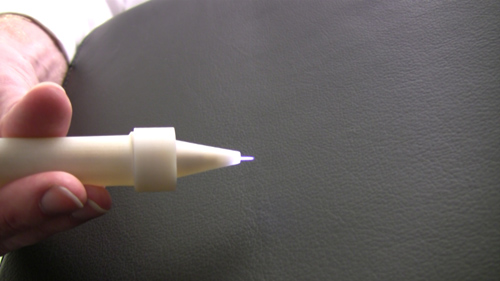 The plasma brush uses chemical reactions to disinfect and clean out cavities for fillings, in addition to forming a better bond for cavity fillings. Image credit: University of Missouri

“200 million tooth restorations cost Americans an estimated $50 billion a year, and it is estimated that replacement fillings comprise 75 percent of a dentist’s work. The plasma brush would help reduce those costs,” said Hao Li, associate professor of mechanical and aerospace engineering in the MU College of Engineering. “In addition, a tooth can only support two or three restorations before it must be pulled. Our studies indicate that fillings are 60 percent stronger with the plasma brush, which would increase the filling lifespan. This would be a big benefit to the patient, as well as dentists and insurance companies.”

Human clinical trials are expected to begin in early 2012 at the University of Tennessee-Memphis. The researchers believe the human clinical trials will provide the data that allow Nanova to find investors and take the next steps in placing the product on the market. If the studies go well and the FDA clears the use, the researchers’ timeline indicates the plasma brush could be available to dentists as early as the end of 2013.