The Earth is constantly manufacturing new crust, spewing molten magma up along undersea ridges at the boundaries of tectonic plates. The process is critical to the planet’s metabolism, including the cycle of underwater life and the delicate balance of carbon in the ocean and atmosphere.

Now, scientists at the Woods Hole Oceanographic Institution (WHOI) have observed ocean crust forming in an entirely unexpected way—one that may influence those cycles of life and carbon and, in turn, affect the much-discussed future of the world’s climate.

Working at the Guaymas basin in the Gulf of California, WHOI scientists confirmed what they suspected from brief glimpses of the area during previous missions: The inner Earth is injecting swaths of magma called sills as far as 50 kilometers away from the plate boundary, on each side of the ridge —nearly 10 times farther from such an active ocean ridge than had been observed before.

Unlike conventional ocean crust production, where magma bubbles up through volcano-like openings in a narrow (about 5 km-wide) zone at the plate boundary, these recently observed magmatic sills never quite make it to the ocean floor. Rather, they form when magma stops in the thick layers of organic-rich sediment filling the basin and spreads laterally. 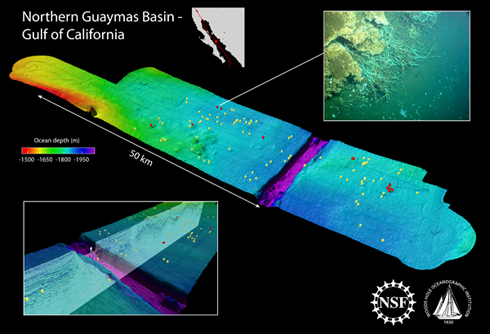 About the image: Bathymetry of a rift segment of the North Guaymas spreading center in the central Gulf of California shows a series of subsurface features. They are interpreted to be shallow sills intruded into the sediment-filled basin up to 50 km from the rift axis (lower left). High-resolution imaging by sidescan sonar revealed nearly 100 potential hydrothermal vent sites (yellow points) believed to result from widespread emplacement of magma over an area 10 times wider than expected at mid-ocean ridges. Deep-sea photographic surveys at some of the sites (red points) found elevated temperatures and methane concentrations in near-bottom waters and vibrant chemosynthetic animal communities (upper right, photo, about 5m across) containing tubeworms, clams, crabs, bacterial mats, and microbially precipitated carbonate deposits. The intrusion of magma into the sediments has the potential to release significant amounts of carbon from the sediments, previously thought to act as a long term carbon repository. Image credit: S. Adam Soule, Woods Hole Oceanographic Institution

Using a sound-wave emitting air gun, side-scan sonar, and ocean-bottom cameras, the scientists determined that the sills are consistently formed at the same shallow depth within the 1-2 km-thick sediment. Normally, when magma erupts at the seafloor, it spreads no farther than 5 km or less from the spreading ridges; any magma found further out than that is usually older material, carried that distance by spreading crust over time and buried deep beneath many years of sedimentation.

The report suggests that rather than escaping through vent openings in the crust confined to the plate boundary, the molten material “intrudes” at numerous points below the sediments up to 50 km from the seafloor ridge, which connects in the north to the San Andreas Fault. This “active, shallow magmatism,” releases nutrient-rich fluids from within the sediments that feed new communities of sea creatures much like those observed around vent sites on deep-water, mid-ocean ridges. 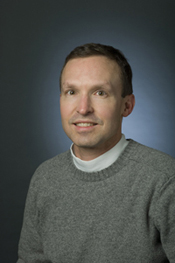 It also releases significant amounts of carbon from sediments, the scientists report in the current issue of the journal Nature Geoscience on Nov. 14. By raising the temperature of the surrounding sediments, the sills produce up to 10 times more CO2 and methane gas than a similar volume of volcanic rocks that spews through a vent onto the seafloor.

The researchers are not sure just how much of these greenhouse gases remain in the sediment and the water, how much they affect the biological communities, and how much CO2 and methane escapes into the atmosphere. But they do know they have observed a novel mechanism in creating ocean crust.

“There is something different about this ridge,” said geologist S. Adam Soule, a member of the WHOI research team led by fellow geologist Daniel Lizarralde. “Somehow it allows the magma to keep spreading.”

“What we see is something that is surprising to a lot of people,” said Lizarralde.  “People are like, ‘How can the magma do that?’” But given the geology of this narrow-rift region, he says, the phenomenon “makes a lot of sense.” Most undersea volcanic areas are able to “focus” magma intrusion up through an opening that is only about 1 or 2 km wide, he says. “Whatever it is that’s different about Guaymas has something to do with controlling these focusing mechanisms.”

Even though it is “different” from conventional sites, Soule suspects the Gulf of California is far from the only place on the planet where this phenomenon is occurring. He says there are “lots of places,” including the Red Sea, with characteristics similar to those of the narrow sea between the Baja Peninsula and the North American continent. In addition to fairly recent sediment deposits, these areas of continental rifting feature coastal ocean upwelling resulting in “high biological productivity and organic-rich sediment,” the researchers report in their study.

Lizarralde, Soule and WHOI colleagues Jeff S. Seewald and Giora Proskurowski detected “thriving animal communities” near the sill areas, Soule said, including tubeworms and bacterial mats. These communities were fostered by the warm water percolating through the sediments to the sea floor, the researchers said. 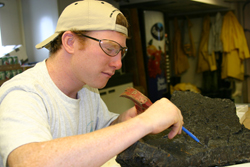 The findings, Soule added, should be of significant interest to a wide range of scientific disciplines. “For biologists, it is the chemo-synthetic communities at the warm seeps,” he said. “Geologists want to know what they can learn about magmatism and how the ocean crust is built. And for climate scientists, it is critical that we have an accurate characterization of tectonic settings that are sources and sinks of carbon.”

The WHOI study, funded by the National Science Foundation, represents “a start in assessing the contribution of the seafloor spreading process to the global carbon budget,” David Goldberg of the Lamont Doherty Earth Observatory writes in an accompanying News and Views piece in Nature Geoscience. “Sills derived from intrusive volcanism in sedimentary basins have been linked to huge natural methane fluxes in the past.

“Further research concerning the biological uptake from seafloor vents is also needed. But what we know now is that sills such as those observed below the Gulf of California, which naturally vent fluids to the ocean, seem to be carbon sources as they cool. “

Lizarralde says the team has written a proposal to go back and further explore the area with other instruments to get a more accurate picture of the carbon flux at the sediment-ocean interface. “The carbon story still remains unclear,” he says.

Goldberg concurs that  “such exploration of the sea floor is critical to assessing its potential as an anthropogenic carbon reservoir as well as to undertaking the Earth’s natural carbon budget.”