A new University of Colorado Boulder study indicates the infestation of trees by mountain pine beetles in the high country across the West could potentially trigger earlier snowmelt and increase water yields from snowpack that accumulates beneath affected trees.

Led by CU-Boulder geological sciences department doctoral student Evan Pugh, the study was undertaken near Grand Lake, Colo., adjacent to Rocky Mountain National Park, an area that has been devastated by mountain pine beetle attacks in recent years. Mountain pine beetles have killed more than 4 million acres of lodgepole pine trees in Colorado and southern Wyoming since 1996, the most severe outbreak on record.

Pugh and his team monitored eight pairs of tree stands, each pair consisting of one live stand and one dead stand roughly an acre each in size and located adjacent to each other, sharing the same topography, elevation and slope. The team monitored the two distinct phases of pine beetle tree death during the three-year study — the “red phase” in which dead trees still retained red needles, and the “gray phase” in which all of the tree needles and some small branches had been shed, said Pugh.

The study showed that there was roughly 15 percent more snow accumulation under the gray phase stands than under living stands or red phase stands, likely due in large part to a lack of “snow interception” by needled tree branches that can cause snowflakes to “sublimate” into gas and return to the atmosphere, he said. Gray phase trees also allow more solar radiation through their canopies than live trees and red phase trees, increasing the potential for earlier melt, said Pugh, lead study author. 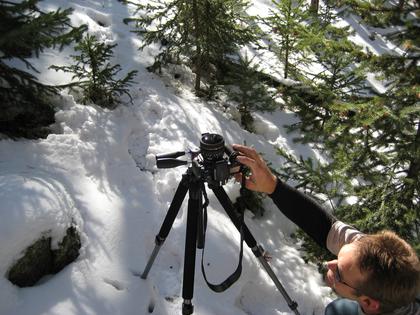 The mountain pine beetle infestation decimating the high country in Colorado and the West may trigger earlier snowmelt and increased water yields, says a new CU-Boulder study. Tevis Blom, shown here taking a hemispheric photo of a tree canopy, was one of four undergraduates who participated in the study. (Photo courtesy Evan Pugh, University of Colorado)

Snowmelt rates were highest under red phase trees, with snow disappearing up to a week earlier than snow in adjacent, healthy stands even though both received the same amount of snowfall at their bases. Pugh showed the earlier snowmelt in red phase tree stands is due in large part to the amount of litter — needles and branches — that drops or is blown from the trees onto on the snow surface, decreasing its solar reflecting power, or albedo, and causing it to absorb more of the sun’s radiation and heat up slightly.

“This is the first study to look at the potential effects that different stages of mountain pine beetle tree death may have on snowmelt,” Pugh said. “What we are seeing is earlier snowmelt and more snow accumulation in dead forests.”

A paper on the subject was published online today in the peer-reviewed journal, Ecohydrology. The paper was co-authored by CU-Boulder geological sciences Professor Eric Small and funded in part by a CU-Boulder Innovative Seed Grant. Four undergraduates — Leslie Baehr, Tevis Blom, Bryant Kealey and Jon Hammond — received internship credit for helping to conduct the research.

The study took place at the headwaters of the Colorado River in north-central Colorado. Six of the eight healthy tree stands in the study were made up primarily of lodgepole pines, while two were made up of mixed conifer trees. “One of the hardest parts of this study was to find stands of healthy trees in this area,” said Pugh.

The red phase that occurs following tree death usually lasts about 18 months, and the onset of the gray phase occurs about three or four years after tree death, said Pugh.

“One of the big surprises to me was that changes in snowpack depth and snowmelt timing as a result of the pine beetle outbreak were not larger,” said Small. But the continuing effects could become more significant in the coming decades, he said.

The CU-Boulder team used a wide variety of instruments during the study. In addition to avalanche poles used to periodically measure the snow depth at the 16 study stands, the team also inserted tiny thermometers at various snow depths to help them predict when the snow would likely melt. They also dug snow pits in each of the tree stands and weighed known volumes of snow to calculate density and water content.

Pugh’s team also used devices known as pyranometers to measure the snow surface albedo and the transmission of sunlight through forest canopies. Fisheye camera images taken from the snow surface helped the researchers to calculate the size and structure of the various tree stand canopies, he said.

“The students really got something out of working on this project,” said Small. “Not only did they get internship credit, they had a chance to conduct meaningful research.”

A massive fire in the study area in the late 1800s resulted in most of the succeeding lodgepole pines to be about the same size and age, making them easier targets for pine beetles. While mountain pine beetle infestations are natural events, climate change probably has played a role in the most recent outbreak. Drought conditions in the West in recent years have caused living pines to absorb less water, decreasing their ability to produce enough sap to “pitch out” beetles that are attacking them, Pugh said.

Water managers in Salt Lake City have reported extra water in river basins that hydrologic models had not predicted, Pugh said, an indication beetle-killed trees are having an impact on meltwater.

With the exception of two studies in British Columbia looking at the effects of beetle- killed lodgepole pine trees on snow accumulation and melt on flat terrain at a single site, research regarding the hydrologic impacts of mountain pine beetles has largely been speculative, said Pugh.

“Our study is the first to analyze the multiple stages of tree death from mountain pine beetles and their different impacts on snow accumulation and snowmelt,” said Pugh. “There is no on/off switch here — only gradual changes.

“The effects of the beetle-killed tree stands in terms of snow accumulation are not going to affect ski resort seasons by any means,” he said. “What we can say is there likely will be additional water resources for water managers. Additional snowpack coupled with dead trees that are no longer sucking up water will likely lead to more runoff.”

*Source: University of Colorado at Boulder (Published on June 8, 2011)