*Meet the Force-sensitive fans who helped bring the Star Wars universe to life in “Kinect Star Wars,” the ultimate Jedi experience for Padawans of all ages.*

The Star Wars loot was bound for the Microsoft campus, joining Jedi posters and dozens of toy droids in the offices where Lee and a team of dedicated, Force-sensitive fans were putting the finishing touches on “Kinect Star Wars.” Available today, the game, as well as a limited edition Star Wars-themed console and hardware bundle, is a love letter to the Star Wars universe that it brings to life like never before, says Craig Derrick, lead producer at LucasArts, which worked closely with Microsoft on the game.

“We make many types of Star Wars experiences here with games and other media,” says Derrick, whose office (unsurprisingly) is also draped in Star Wars memorabilia. “But until now, we never found a way to make a game that allows you to believe you have the Force.” 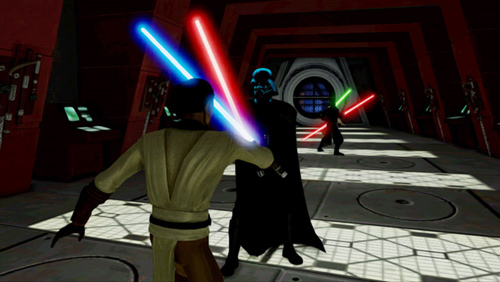 Harnessing the controller-free power of Kinect for Xbox 360, “Kinect Star Wars” enables fans to physically hone their Jedi skills, wield the power of the Force in their hands, pilot iconic ships and vehicles, rampage as a vicious Rancor monster and dance with beloved Star Wars characters. The game offers something for everyone through five very different gameplay modes, adding up to an anthology of Star Wars experiences that capture the adventure, fun and humor of the Star Wars universe, Derrick says.

The game aims to deliver the ultimate Jedi experience for Star Wars fans, explains Lee, a senior program manager at Microsoft who worked on the game’s Jedi Destiny campaign. She recalled getting goose bumps the first time she played the game end-to-end. It was exactly what she hoped it would be.

“I wanted to be a Jedi,” says Lee, whose favorite Star Wars character is Yoda. “I wanted to swing lightsabers and use the Force. I wanted the iconic music, characters and worlds of the Star Wars universe and feel like I was truly a part of it. And I think we did a great job delivering that for fans.” 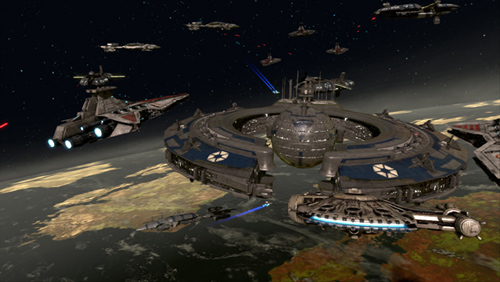 About the image: You’re in the Driver’s Seat. Pilot iconic Star Wars ships and vehicles in the “Kinect Star Wars” game.

Creating a Galaxy Far, Far Away

Work on “Kinect Star Wars” started even before the official release of Kinect. Don Mattrick, president of Microsoft’s Interactive Entertainment Business division, flew down to California to demo the new sensor for George Lucas. “Before the meeting was out, George called up LucasArts and said, ‘We have to do this,’” says Jorg Neumann, studio head of Kinect Publishing and creative director of “Kinect Star Wars.” 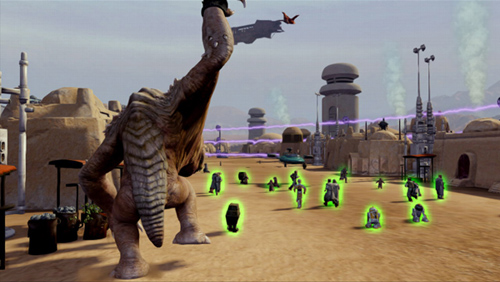 Both Microsoft and LucasArts wanted to add another chapter to the Star Wars story. The question soon became: Where to start? Millions of people consider themselves fans, says Neumann, but they all had different introductions to the franchise. He saw the original Star Wars film 30 times as a boy in Germany. (The movie theater was right next to his school; he distinctly remembers not stepping foot in the building all summer long.) His kids, though, came into the story through the “Clone Wars” cartoons. And then there were the prequels, which had brought Star Wars to yet another generation.

The development team knew the point of the game had to involve being a Jedi. Go too far back in time, and the Jedi were in rough shape. The original films take place in the wake of the Great Jedi Purge; no Jedi, no game. They decided to set the story shortly after the events shown in 1999’s “The Phantom Menace,” which would bring virtually every Star Wars character into the game.

“For us it was always important that all fans feel immediately at home in the Star Wars universe,” Neumann says. That’s why everyone’s favorite droids – R2-D2 and C-3PO – welcome new players at the start of the game. In fact, R2-D2 is Neumann’s favorite character (“He is incredibly expressive even though he more or less looks like a trash can.”). In the “Kinect Star Wars” core experience, “Jedi Destiny: Dark Side Rising,” players don the Padawan robes of a young Jedi and train to stem the growing galactic threat. The gameplay is every fan’s dream: Swing your right arm to wield a lightsaber, use your left to fling bad guys around with the Force, and bob, duck and jump to avoid obstacles and enemies. 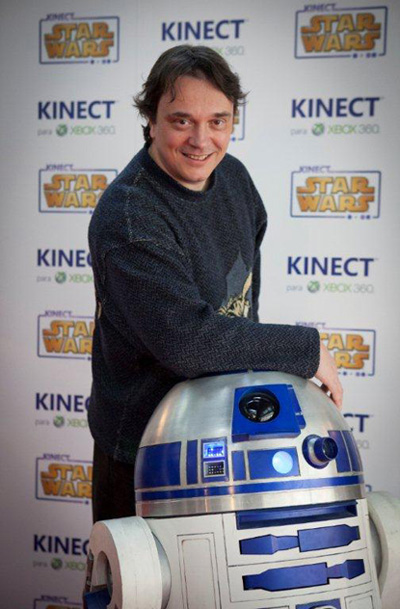 Jorg Neumann, studio head of Kinect Publishing and creative director of "Kinect Star Wars", knew it was important that fans felt immediately at home in the Star Wars universe through the game. Image credit: Microsoft

Countless hours were spent getting the feel of the game just right, says David Tuft, a publishing senior software engineer. Tuft actually switched jobs at Microsoft to work on “Kinect Star Wars.” “It’s the freaking Star Wars universe you’re creating here!” he explains. His favorite character is Boba Fett: “He doesn’t say anything, he’s just awesome.” Translating a player’s movements and making the character onscreen look like an awesome hero was a delicate balancing act. “You can only swing with all your might a few times before you get tired,” Tuft says. The Kinect sensor will translate more subtle movements into powerful motions onscreen.

The game came to life for Neumann shortly after the developers started to put in kicking motions. It was the final touch to gameplay after swinging a lightsaber, using Force push and lifting objects with Force telekinesis. “When kicking came in, you could literally use your entire body to throw yourself into battle,” he says. “It was awesome: All these dark underling guys are trying to hit you and then you could swing your lightsaber and kick them into the countryside.”

To recreate the eight different planets found in the game, the team turned to the vast body of Star Wars literature. They bought just about every Star Wars-related book they could find, many of which laid out in great detail every visual element in the movie. LucasArts also opened up the Stars Wars vault for the game, letting them access a database that contained just about anything they wanted from the films: concept art, model images, sound effects. So in the game, every room, every forest, every race track looks exactly like it does in the movies. Neumann is particularly proud of the pod racing mode, which takes place in Boonta Eve. Other Star Wars games purposefully made the track small for better gameplay. But in “Kinect Star Wars,” the track is almost to scale.

“The overarching goal is to make you feel that rush and that excitement you had when watching the movies, except actually feeling like you are part of that experience,” Lee says. 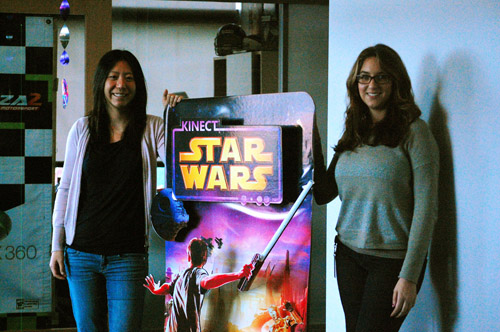 Abby Lee and Nahil Sharkasi grew up as Star Wars fans and got to live out their earlier Jedi fantasies through their work on "Kinect Star Wars". Image credit: Microsoft

Laugh it Up, Fuzzball

Swinging a lightsaber, piloting a star ship, flinging bad guys with your hand – the main game offered the ultimate Jedi experience. But Kinect offered other opportunities to let fans get physical, the teams realized. They searched their feelings and decided to have more fun with the Star Wars universe.

Part of the appeal of Star Wars has always been the light-hearted, tongue-in-cheek humor found in the movies. The development teams decided to bring that to life in alternative game modes that could also appeal to the whole family. “As a parent, it is very rewarding to be a part of creating something for families to enjoy together,” Neumann says.

Take “Galactic Dance Off.” Inspired by the Return of the Jedi scene where Princess Leia entertains Jabba the Hutt (and, for several decades, millions of boys), players can shake their booties in the guise of Han Solo, a Stormtrooper, or Leia herself. There’s also a pod racing mode, which features a career campaign in one of the roughest corners of the galaxy; a one-on-one lightsaber duel mode where friends can go head-to-head against each other or classic characters from the film; and Rancor Rampage, in which you destroy towns for points as the famous beast that tried to munch on Luke Skywalker.

Nahil Sharkasi, a producer who worked on UI, says the game sprang to life when she got to stomp around as a Rancor monster, crushing buildings and seeing the rubble rain down. “It was an entirely new mechanic we hadn’t seen before in Kinect, and it was really fun right off the bat,” she says. “When we worked on the Rancor mode, the build reviews would go on for hours because everyone would wander in and check it out.” Sharkasi’s favorite character is Chewbacca.

By offering something for everyone, “Kinect Star Wars” “is the Star Wars experience you’re looking for,” LucasArts’ Derrick says. The final product delivers on the hopes he had when he flew to Seattle to see what Kinect could do.

“All I would ever want to do is be able to reach out my hand and manipulate the Force in some meaningful way onscreen,” he says. “That’s exactly what this device allows us to do. We’ve all pretended to use the Force in our back yards and basements, but we’ve never been able to manipulate objects in a game with your hands without a controller. The idea that you could do that with Kinect became the starting point. And it works.”