ANN ARBOR, Mich.— As another round of talks continues between Israelis and Palestinians, a new University of Michigan study documents the impact the violence has been inflicting on the region’s children.

Palestinian and Israeli children not only suffer the direct physical consequences of violence, they are also being psychologically scarred by the high levels of violence they witness, according to the study, presented earlier this summer at the International Society for Research on Aggression.

Nearly 50 percent of Palestinian children between the ages of 11 and 14 reported that they had seen other Palestinians upset or crying because someone they knew or loved had been killed by Israelis. Nearly the same proportion reported seeing in person other Palestinians who were injured or dead, lying on stretchers or on the ground, as a result of Israeli attacks in the last year. 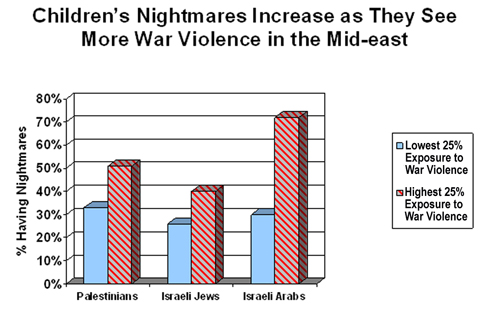 For Israelis, the figures were lower but still appallingly high, according to the study. More than 25 percent of Israeli Jewish children of the same age reported seeing other Israelis upset or crying because someone they knew or loved had been killed by Palestinians, and nearly 10 percent reported that they had seen in person other Israelis who were injured or dead, lying on stretchers or on the ground, as a result of Palestinian attacks in the last year.

“The results show that Palestinian children in particular are seeing extraordinary amounts of very disturbing violence in their daily lives,” said psychologist Rowell Huesmann, director of the Research Center for Group Dynamics at the U-M Institute for Social Research (ISR) and principal investigator of the project. “Furthermore, this exposure is very deleterious. It is associated with dramatic increases in post-traumatic stress symptoms and increases in aggressive behavior directed at peers.” 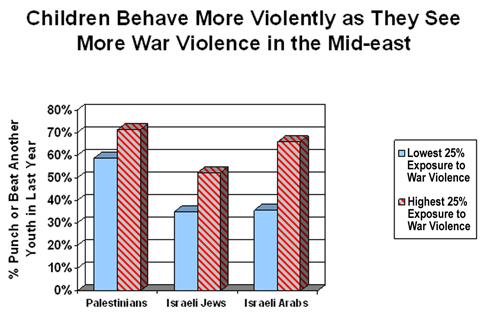 Children who saw the most violence experienced the highest levels of fear, anxiety, nightmares, and incapacitating thoughts, according to results from the first year of the three-year, longitudinal study of 1,500 children ages 8 to 14. For example, more than 70 percent of Israeli Arab children who saw these things frequently had nightmares.

Even more disturbing, both Palestinian and Israeli youth who saw the most violence were significantly more likely to slap, choke, punch, beat, or threaten others of their own groups with a gun or a knife. For example, 51 percent of youth at the lowest levels of violence exposure reported having committed at least one of those acts during the past year versus 71 percent of youth at the highest levels of violence exposure.

“The results show that Palestinian children in particular are seeing extraordinary amounts of very disturbing violence in their daily lives, and the more they are exposed to violence, the more anxiety they experience and the more aggressively they behave,” said ISR psychologist Eric Dubow, who along with Paul Boxer of Rutgers University is a co-principal investigator of the project.

The study was funded by the National Institute of Child Health and Development and the Fogarty Center for International Studies and is a collaboration between the ISR, Hebrew University of Jerusalem, and the Palestinian Center for Policy and Survey Research in Ramallah.

The researchers also showed that the relation between exposure and aggression and anxiety is not due to other characteristics of the youth or family. And although exposure to war-related violence seemed to stimulate more family and community violence as well, analyses showed that the effects on symptoms of post-traumatic stress and on aggressive behavior were a direct result of exposure to war-related violence.

“Because of the sophisticated sampling and interviewing techniques used by our collaborators—Khalil Shikaki at the Palestinian Center and Simha Landau at Hebrew University, we believe that this is the most accurate data every collected on this topic anywhere in the world,” said Huesmann, who was recently appointed to the U.S. National Academy of Science, Institute of Medicine Forum on Global Violence.

“Given the accumulated scientific evidence showing that exposure to violence stimulates aggression, some of these results are not surprising,” Huesmann said. “However, it is not well known that exposure to war violence committed against your own group by another group increases your aggressive behavior toward members of your own group.

“The truth is that violence is a contagious disease just like smallpox and typhoid, and children are particularly susceptible to catching it. In the Mideast, violence has reached epidemic proportions among children, and most of them are infected. The scar tissue from these infections may never go away, but new infections among children could be reduced if the Israelis and Arabs could only settle their conflict. Knowledge of the devastating psychological impact of violence on their children should be an added incentive for them to settle the conflict.”