In the vast ocean where an essential nutrient—iron—is scarce, a marine bacterium that launches the ocean food web survives by using a remarkable biochemical trick: It recycles iron.

By day, it uses iron in enzymes for photosynthesis to make carbohydrates; then by night, it appears to reuse the same iron in different enzymes to produce organic nitrogen for proteins. 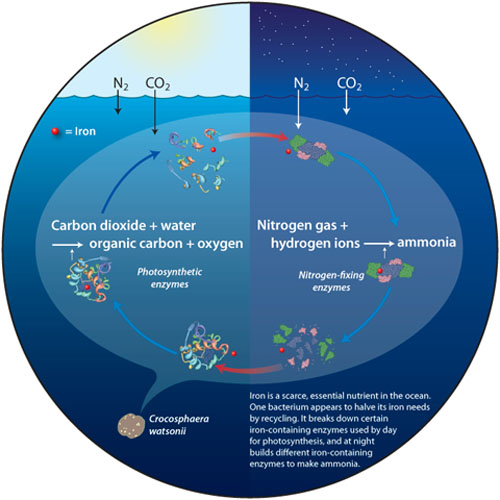 Got iron? It's an essential nutrient for living things, but it's scarce in the ocean. Scientists have found that a key marine bacterium, Crocosphaera watsonii, may have evolved a remarkable biochemical way to recycle iron for dual metabolic activities. Image credit: by Jack Cook, Woods Hole Oceanographic Institution

This newfound capacity to conserve precious iron and use it in day-night shifts to satisfy two different metabolic demands reveals a surprising key to life on our planet, say scientists at Woods Hole Oceanographic Institution (WHOI) and Massachusetts Institute of Technology (MIT). They reported their findings Jan. 10 in the Proceedings of the National Academy of Sciences.

The scientists call the strategy “hot bunking,” referring to ships that sail with fewer bunks than sailors on board. The bunks are kept continuously hot, as sailors finishing night shifts hop into bunks newly emptied by sailors arising for day shifts.

Crocosphaera uses iron-containing nitrogenase enzymes to convert dissolved nitrogen gas into organic nitrogen (a process called nitrogen “fixing”). As the sun comes up, the bacterium breaks down these enzymes, releasing iron that can be used to make photosynthetic enzymes needed to convert dissolved carbon dioxide into carbohydrates. When the sun goes down, many of the photosynthetic enzymes are broken down, releasing the iron again to be recycled into nitrogenase.

Crocosphaera belongs to a subgroup of bacteria called cyanobacteria. “They have a bit of a Dr. Jekyll and Mr. Hyde lifestyle: photosynthetic by day and nitrogen-fixing by night,” said Mak Saito, a WHOI biogeochemist and lead author of the PNAS paper. Scientists previously knew cyanobacteria had this unusual dual-metabolic capacity, but they did not know how they could accomplish it with meager iron supplies. 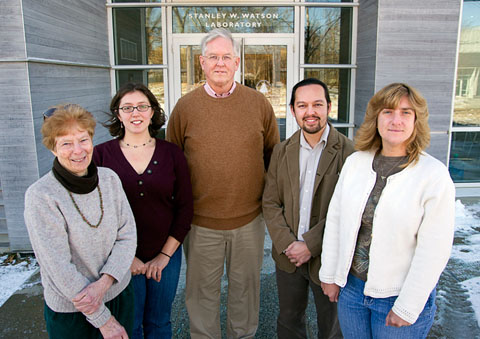 The bacterium pays a price in energy needed to destroy and rebuild enzymes each day, but it’s worth it to maximize the use of scarce iron. The scientists estimate that by using the hot bunking strategy, the organism can survive with about 40 percent less iron than it would otherwise need. It allows Crocosphaera to thrive and produce life-sustaining organic nitrogen in iron-poor waters that would otherwise be less productive.

The surprising abundance of cyanobacteria in the ocean was discovered in the 1970s by WHOI microbiologist Stanley Watson and his colleagues Frederica Valois and John Waterbury and, who later continued their pioneering research to elucidate cyanobacteria’s critical ecological roles for the ocean and the planet. Crocosphaera watsonii is named after the late Dr. Watson.

Cyanobacteria have been notoriously difficult to culture in the laboratory. At WHOI, Waterbury, Valois and colleagues established methods to culture cyanobacteria routinely and reliably, and they maintain a collection of cyanobacteria cells in a new building called the Stanley W. Watson Laboratory. The collection is a sort of lending library of cells that provide cultures for scientists all over the world to study, including new generations of WHOI scientists working in the Watson Lab: Saito, graduate student Erin Bertrand, and lab associates Vladimir Bulygin and Dawn Moran.

They applied new biomedical research techniques to the study of the ocean: proteomics. As genomics studies the genes in an organism (its genome), proteomics studies the proteins made from instructions encoded in genes (its proteome).

“We wanted to know not only what could potentially be made from Crocosphaera’s genome, but also what proteins Crocosphaera actually did make,” Saito said.

A key part of the technique involves using mass spectrometers that distinguish and measure the various proteins in an organism by the infinitesimal differences in their masses. The researchers measured the inventory of iron-containing proteins during periods of dark and light. Nitrogen-fixing enzymes were largely absent during the day and present at night; iron-containing photosynthetic enzymes decreased during dark periods and reappeared during light periods. Thus, at any time of day, Crocosphaera required only about half the iron it would need if it maintained both sets of enzymes throughout the day.

To explore the implications of Crocosphaera’s hot bunking ability, scientists at MIT—Stephanie Dutkiewicz, Fanny Monteiro and Mick Follows—used a numerical model that simulates global ocean circulation, biogeochemistry, and ecosystem dynamics. The model showed that Crocosphaera’s ability to reduce its iron requirements allowed it to inhabit ocean regions with low levels of iron. It also allowed the same iron supply to support more growth of the cyanobacteria and more nitrogen fixation that supports other marine life higher up on the food chain.