In the first study of its kind, the researchers combined sorafenib, the only Food and Drug Administration-approved pill for treating advanced liver cancer, with another routinely used therapy known as transarterial chemoembolization, which works by cutting off the blood supply to tumors. No unexpected toxic effects were seen, and the combo appears to have the potential to improve survival for certain groups of patients.

“There’s very strong rationale for combining these two treatments — what’s lacking are data on safety, tolerability and efficacy of using them simultaneously,” said lead researcher Dr. Roniel Cabrera, a hepatologist and an assistant professor of gastroenterology, hepatology and nutrition in the UF College of Medicine’s department of medicine.

The findings are published in the current issue of the journal Alimentary Pharmacology and Therapeutics. 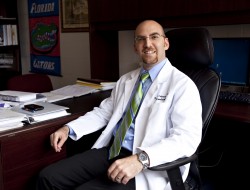 Roniel Cabrera, M.D., M.Sc., an assistant professor in the UF College of Medicine’s division of gastroenterology, hepatology and nutrition. Photo by Sarah Kiewel/University of Florida

“This report is important because it shows there is potential benefit in using these drugs together — increasingly, we will be combining therapies rather than using one or the other,” said Dr. Paul Martin, chief of hepatology at the University of Miami School of Medicine, and an editor of the journal in which the study was published. Martin was not involved in the UF study.

The most common type of liver cancer, known as hepatocellular carcinoma or HCC, is the fifth most common cancer, and the third leading cause of cancer-related deaths in the United States. It is on the rise even at a time when new cases of other cancers are declining. Despite new therapies, more than 500,000 new cases, and nearly the same number of related deaths, occur each year worldwide, according to the World Health Organization.

One main reason for the increase in new cases is chronic liver disease, particularly cirrhosis, related to chronic hepatitis C infection. Up to one-third of patients who have cirrhosis develop HCC, and up to 90 percent of patients with liver cancer also have cirrhosis. Another major emerging risk factor, linked to the epidemics of obesity and diabetes in the United States, is metabolic syndrome, including nonalcoholic fatty liver disease, a condition in which fat accumulates in the liver, causing inflammation and cirrhosis over time.

The optimal treatment for the tumor is transplantation, but unfortunately, by the time most patients are diagnosed the cancer has advanced to the point at which there are few viable treatment options.

Most patients with advanced cancer confined to the liver are given a treatment called transarterial chemoembolization. This invasive therapy, administered by an interventional radiologist, involves starving a tumor by cutting off its blood supply with chemotherapy delivered via the artery that feeds the tumor.

Patients with more advanced cancer that has spread outside the liver are generally treated with a pill called sorafenib, FDA-approved for that use in late 2007. These treatments are palliative, and though both have been shown to improve survival, patients still eventually see their cancer get worse and worse.

“This really highlights the need for new treatment approaches for these patients,” said Cabrera, a member of the UF Shands Cancer Center.

The multidisciplinary team of UF researchers wanted to see what would happen if they combined the two therapies.

Chemoembolization therapy boosts production of substances that promote the formation of new tumor-feeding blood vessels. Researchers believe that adding sorafenib to the mix could help offset that tumor-friendly activity and improve the therapeutic action of the initial therapy.

The concern, however, is whether it would be safe to have sorafenib circulating in a patient’s bloodstream at the same time that the other therapy is being delivered into the blood vessels, and whether it would affect a physician’s ability to perform the procedure.

The UF researchers found that the combo appears to be safe.

In addition, for a certain subset of patients with advanced HCC, the median survival rate with the combo therapy was 17 months, an improvement of up to seven months over what has been reported previously. This result warrants further study, because it could substantially change how patients are treated.

Side effects such as fatigue, diarrhea and skin reactions were noted in most patients, but only slightly more so than in studies of single therapies.

“Even though this is potentially toxic therapy because patients have underlying cirrhosis, it appears to be well-tolerated,” Martin said. “It was reassuring that there were no new toxicities identified.”

Furthermore, the higher rates of adverse events might be attributable not necessarily to the combining of therapies, but to the fact that patients in the current study were sicker than those in previous trials. Almost 30 percent of the patients in the UF study had moderate liver function impairment, and 20 percent had advanced liver cancer — such patients were excluded from previous trials.

Managing the care of patients with liver cancer and administering the new treatment regimen required teamwork among up to a dozen physicians in multiple specialties: hepatologists, interventional radiologists, surgeons and oncologists.

“This highlights the benefits to the patient if different groups of physicians work together as a unit,” said Dr. James Caridi, a professor of radiology, chief of vascular and interventional radiology in the UF College of Medicine and a member of the UFShands Cancer Center. “I strongly support a multidisciplinary approach because it expedites expert patient care.”

The study was funded by a National Institutes of Health award through the UF Clinical and Translational Science Institute, and a Florida Department of Health Bankhead-Coley new investigator cancer research award to Cabrera. Members of the research team have served as speakers, consultants and advisory board members for, and received research funding from, Bayer HealthCare and Onyx Pharmaceuticals Inc., the makers and marketers of sorafenib.