Being Small Has Its Advantages, If You Are a Leaf

The size of leaves can vary by a factor of 1,000 across plant species, but until now, the reason why has remained a mystery. A new study by an international team of scientists led by UCLA life scientists goes a long way toward solving it.

In research federally funded by the National Science Foundation, the biologists found that smaller leaves are structurally and physiologically better adapted to dry soil because of their distinct vein systems.

The research will be published in an upcoming print issue of the journal Plant Physiology and is currently available in the journal’s online edition.

“A hike in dry areas, such as the Santa Monica Mountains, proves that leaves can be small. But if you are in the tropical forest, many leaves are enormous,” said Lawren Sack, a UCLA professor of ecology and evolutionary biology and senior author of the research.

This biogeographic trend — smaller leaves in drier areas — may be the best recognized in plant ecology, true at both the local and global scales, but it had evaded direct explanation, Sack said.

Sack and his research team focused on deciphering the meaning of the huge diversity in the patterns of veins across plants. They found that small leaves’ major veins — those you can see with the naked eye — are spaced more closely together and are of greater length, relative to the leaf’s size, than those of larger leaves.

This redundancy of major veins, the researchers say, protects the leaves from the effects of embolism — bubbles that form in their “water pipes” during drought — because it provides alternate routes for water to flow around vein blockages.

“Even with strong drought that forms embolism in the veins, a small leaf maintains function in its vein system and can keep functioning for water transport,” Sack said.

“Unlike people, plants don’t seem to have a complex hierarchy of needs — give them sun, water and nutrients, and they will be happy,” said Christine Scoffoni, a UCLA doctoral student in the department of ecology and evolutionary biology and lead author of the research. “But when one of these three fundamental resources becomes scarce, the plant will have to find a way to cope with it or die, because there is no escape. Coping with drought can be a strong selective factor on leaf form, especially on size and their venation.” 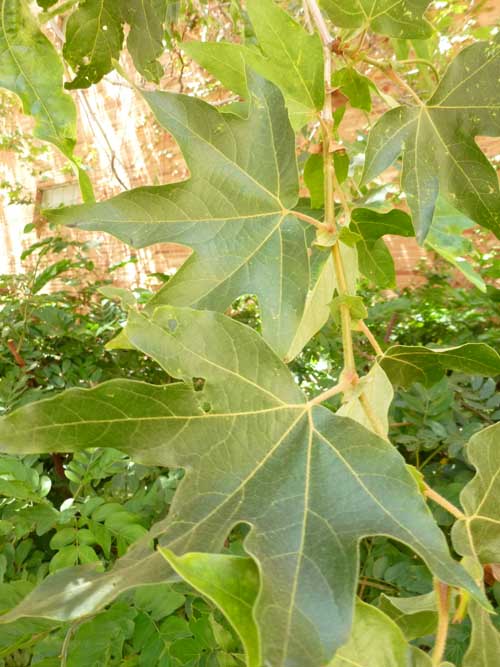 Platanus racemosa has a large leaf and is native to moist habitat. Image credit: Christine Scoffoni/UCLA Ecology and Evolutionary Biology

“When we ask our students in plant physiology class why plants need water, their first answer is for growth,” Sack said. “They are amazed to learn that the bulk of the water used by a plant is actually to make up for the water lost through transpiration, which would otherwise dry out the leaves. When the leaves open the small pores on their surface, the stomata, to capture carbon dioxide for photosynthesis, water is lost to the dry atmosphere. To stay moist inside, the plants need to replace the water lost by evaporation.”

To do this, plants need to maintain the continuity of water in their “pipe delivery system,” even as water is being pulled up by the leaves to replace water that has been lost to the air. This places tension on the water in the pipe system, known as the xylem, which runs through the roots and stem and into the leaf veins. And that continuity is challenged by dry soil, Sack explained.

“The less water in the soil, the more the leaves have to pull to get some out, so stronger tension starts building in the plant’s pipes,” Scoffoni said. “At a certain level of tension, an air bubble is pulled in from outside, blocking the flow of water. One way for a plant to withstand drought is to tolerate many of these embolisms.” 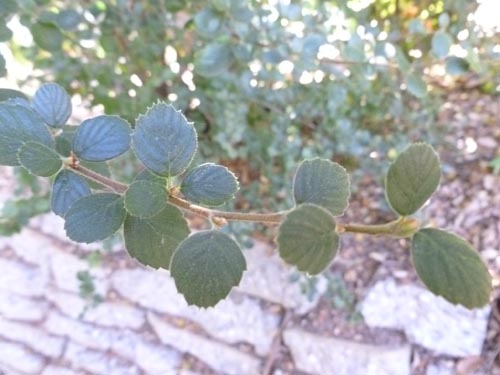 Cercocarpus betuloides has a small leaf and is native to dry habitat. Image credit: Christine Scoffoni/UCLA Ecology and Evolutionary Biology

To test this idea, the UCLA team collaborated with professor Hervé Cochard from France’s University of Clermont-Ferrand and a member of the Institut National de Recherche Agronomique, to construct three-dimensional computer models of leaves’ venation systems. They then simulated the impact of embolism on water transport for leaves of different sizes and vein architectures.

The biologists found a distinct difference in function between the major veins, which tend to show a branching pattern, and the minor veins, which form a grid embedded within the leaf and make up most of the leaf’s total vein length. Blocking the major veins had a huge impact on leaf function — but one that could be remedied by having additional, redundant major veins.

Scoffoni likens the major veins to a superhighway and the minor veins to sinuous city roads, where embolism is like an accident causing a major slowdown.

“If an air bubble forms in the leaf’s water pathway, the more alternate highways the vein system has to offer, the less the leaf will be affected by these accidents,” Scoffoni said.

The UCLA biologists — including co-authors Michael Rawls, an undergraduate student, and Athena McKown, a postdoctoral scholar in ecology and evolutionary biology — tested diverse leaves from very wet and dry areas, all planted near the UCLA campus. The leaves fit the pattern: The biologists found that smaller leaves indeed had more tightly packed major veins and were more resistant to the effects of embolism in the major veins. The were better able to maintain water transport, even during extreme drying, Sack said.

While the trend of smaller leaves in drier areas is so striking that it appears in textbooks, and the trend is used by scientists to estimate rainfall in the distant past from the size of fossil leaves, the mechanism had never been explained. The previous theory proposed an indirect linkage, arguing that smaller leaves have a thinner layer of still air around them, which allows them to cool off faster in hotter places. According to this theory, because many dry places are also warmer, this might lead to the evolution of smaller leaves in such environments.

As Sack noted, however, “this is indirect and does not explain the trend of smaller leaves in drier places when temperature is similar. This trend appears across species, and even within individual species, when plants are grown in moister and drier soil.”

The team expects that this mechanism, which points to a new role of vein architecture and leaf size in drought tolerance, will generate new interest in plant diversity and adaptation to environments. In addition, Sack said, the discovery shows that even very well-known biogeographic trends are open to new scientific explanation.