You May Be A Scientist And Not Know It

Many people think about science as a collection of facts: A cheetah can achieve speeds of 75 mph; the mitochondria are the powerhouse of the cell; E=mc2. But all of these facts, as interesting as they are, are just the outcome of science.

Science is a process – a way of thinking – and scientists are just people who adhere to that process. I have recently seen a lot of people who preface their statements with “I’m not a scientist, but…” What they mean is that they don’t have a career where they are explicitly paid to follow the scientific method in a particular domain, like biology or chemistry or psychology. They see “scientists” as people who wear lab coats, do things with test tubes, peer down microscopes, and wear glasses with heavy frames. I’d like to sit down with people who say they’re not scientists and really talk about their jobs, how they approach problems in their own lives. They may be scientists and not know it. 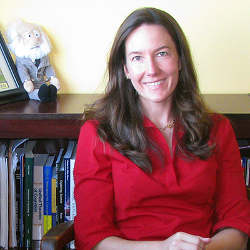 I often use my mom as an example. She majored in home economics back in the 1960s. She was an interior decorator for a number of years with her own company, later bought decrepit homes and fixed them up, and has lately found her passion making jewelry and selling it online. Science isn’t a word she uses or would claim any interest in.

Yet she is absolutely a scientist.

In the late 1980s, when I was about twelve, I came home to find signs taped to lamps around the house. The signs read “DO NOT TURN OFF.”

My mother had a hypothesis: Turning light bulbs on and off made the bulbs burn out more quickly. She thought she had noticed this through the years, but wanted to be sure. To test her hypothesis, she had replaced all the bulbs and put signs on some of the lamps to keep them from being turned off. Others could be turned on and off normally. This was a long-term project and we got used to a bright living room.

As someone who gets paid to carefully control variables, I might have set times where all the normal bulbs were turned off, then on again, so their total light time might be compared. I’d also want enough bulbs involved so that a defect in one or two wouldn’t affect the conclusions. But no experiment is perfect and she did set it up well in one regard – if the bulbs that spent little time turned on (but were turned on and off normally) tended to burn out faster, that would be a pretty good indication that the stress of on/off was detrimental. When my mom wanted to know something, she came up with a way to collect data and figure it out.

My mom developed her experiments to help her make real-world decisions in her house. In that, I follow her lead. I study human factors psychology, which is an “applied” field, meaning that the results of our studies and experiments can immediately affect people and the world around us. For example, one recent study from my lab examined some of the reasons checklists help keep us on track toward achieving our objectives.

If I said a checklist would help you get a job done better, many people may say “Well, of course. It helps you remember what to do.” I might get a few eye rolls, either from people who think this observation is obvious or from those who feel they don’t need checklists to remember what to do. Until the last decade or so that was the response from many doctors when it was suggested that they use checklists during their procedures.

But doctors and patients started to pay more attention after 2001, when Dr. Peter Pronovost released a study that found checklists drastically reduced infection rates in his hospital. Pronovost said in a 2007 interview with NPR that, “if there had been a drug that reduced infections by 66 percent, which is just what this checklist did, we would have that drug in everybody’s hands in the country.”

It is a testament to our human stubbornness that even after Pronovost’s study, many people still treat the checklist as obvious and unnecessary for anyone good at their job. However, the medical field did take note of Pronovost’s findings, and since 2001, medical checklists have taken off and improved health outcomes the world over.

Most people, when I ask that question, are quite certain it’s because a checklist is a memory aid. It helps everyone on the team remember what they are doing, what they’ve done and what they need to do. This is certainly important, but it’s hardly the most interesting reason a checklist works.

A few years ago, my lab worked to create a checklist for cardiac catheterization procedures at the NC State College of Veterinary Medicine. We followed the guidelines put down by the World Health Organization (WHO), including getting commitment and buy-in at all levels of the surgical and anesthesia teams and designing a checklist that was easy to follow. But one thing that struck us in every conversation about the procedures was the importance of social interaction. As highly trained as they were, these techs, cardiologists and anesthesiologist were not robots. They really liked the parts of the checklist that requested them to interact with each other. These experts knew all of the steps, but with team members ducking in and out weekly, they often didn’t know everyone’s names or their roles. On top of that, it was clear that everyone came into the procedure with a mental picture of what to expect. But those pictures didn’t always match up, and it was often during the surgical procedure that each team member scrambled to understand or follow the expectations of another.

We then identified that one of the key aspects of the checklist was that it included items that made team members talk to each other. Like the WHO checklists, everyone had to pause before the first incision was made to check on the identity of the patient, the expected procedure, and give their names and roles. Then, the cardiologist reviewed “anticipated critical events and unexpected steps” and estimated how long he or she thought the procedure should take. This was important information – usually the cardiologist had a sense of these probabilities based on the age and health of the canine patient. But without a checklist item for the discussion, it could be easy for the cardiologist to assume that everyone on the team had the same expectations.

Thinking that others know the same things that we do is common. If you’d like to see it in action, try drumming a song onto a table and ask a friend to name it. Chances are you’ll be shocked at how poorly they do – after all, it’s so obvious to you what it sounds like! But that’s the problem. We can’t really put ourselves in another person’s mind. Thus, having some low-tech help from a checklist that reminds us to be clear about what we are thinking can help others understand what to expect.

The development of this checklist was not an experiment. It was an application using theory derived from previous experiments. We’ll be following up after a couple years of use to see whether the checklist changed complication rates and surgical outcomes when compared to the previous two years. Like my mom was with her light-bulb experiment, I was constrained by the applied nature of this work: there aren’t enough procedures or veterinary colleges willing to participate to have randomly assigned checklist sites compared to non-checklist sites, so I couldn’t entirely control for all potential influences (such as which residents were assisting on procedures before and after the checklist intervention). In many of my studies I have more control, but often the most interesting and impactful questions can’t be addressed with a “perfect” research design.

This kind of applied research is common in my area of human factors psychology. In human factors, we always have an eye toward directly applying our results in ways that people can see and feel in their everyday lives. The most traditional example of this was changing cockpit designs for aircraft so that pilots would make fewer mistakes – such as pulling up the landing gear instead of the flaps (which made for an exciting touchdown).

You’ve also seen human factors in the design of warnings – a colleague of mine discovered that a large percentage of people misinterpreted the outline of a pregnant woman with a line across her to mean “taking this pill will keep you from being pregnant.” Since the actual warning was “Do not take if pregnant – causes birth defects,” this was a terrifying misunderstanding that needed correcting!

You may not know, for example, that any medical device you might get from a doctor, such as a blood glucose monitor or a pacemaker, has to be tested and refined by a human factors psychologist. The FDA made this a mandate after a number of studies showed how difficult these devices were to use and how often patients made errors due to poor design.

And more and more human factors psychologists are being hired in entertainment fields, such as video games. Aside from running “playtesting” studies where they collect data on how players interact with games that are in development, these psychologists use their knowledge of human perception, cognition and movement control to advise designers on how best to create entertaining challenges while reducing frustration with game interfaces.

In human factors the first rule is to acknowledge the limitations of human beings. We can’t read 6 point font, or see in the dark, or read red text on a blue background, to name a few of our shortcomings. We also can’t react fast enough to take over a self-driving car if there’s a deer in the road. We can’t pick out the most important alarm in a cacophony of alarms at a nuclear plant. Thus, we have to design those systems to work with our limitations, not assume we’ll overcome them through (literally) superhuman efforts. It may not sound superhuman to be able to do two things at once, but when those things are texting and driving, it’s beyond human capacity. Identifying these problems and developing solutions is the domain of the scientist-practitioner.

I wish I had a satisfying end to the light bulb story, but alas it ended up being an illustration of how decent science can be foiled by meddling. My dad thought it would be funny to replace any burned-out bulb to make my mother think that bulbs would last forever if not turned off. But perhaps my mom has the last laugh, since her hypothesis on light bulbs was supported by research and is used as an example in physics classes for conveying the impact of the initial voltage stress on light bulb filaments.