President Richard C. Levin today announced that Dr. Henry A. Kissinger will donate his papers to Yale University. The collection, which consists of approximately one million documents and objects covering Dr. Kissinger’s extraordinary life as a diplomat, scholar, teacher, and private citizen, will enhance Yale’s existing strengths as an archival repository for major 20th century American leaders. Yale already holds the papers of renowned former diplomats and alumni Henry Stimson (Class of 1888), Dean Acheson (Class of 1915), and Cyrus Vance (Class of 1939, LAW ’42), as well as those of President Woodrow Wilson’s most influential adviser, “Colonel” Edward House. 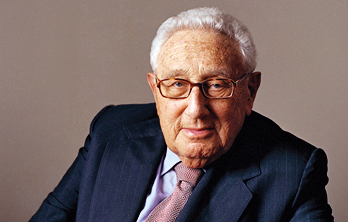 The Kissinger Archives at Yale University will serve as the foundation for the newly established Johnson Center for the Study of American Diplomacy, made possible by a gift from Charles B. Johnson, the Chairman of the Board of Franklin Resources, one of the nation’s leading mutual fund companies, headquartered in San Mateo, California. Mr. Johnson, a member of the Yale College Class of 1954, is one of Yale’s most generous donors. Previously, he supported the expansion of the Brady-Johnson Program in Grand Strategy, the renovation of the Yale Bowl, and the creation of Yale’s first all-season outdoor athletics field. The new Johnson Center, to be located within the Jackson Institute for Global Affairs, will encourage research and teaching on United States foreign policy by drawing on the Kissinger Archives as well as other important Yale library collections in this field.

As a program of the Jackson Institute, and in collaboration with the Brady-Johnson Program in Grand Strategy, the Johnson Center will bring prominent statesmen to campus as Kissinger Senior Fellows, as well as host Kissinger Visiting Scholars who are researching and writing about the history of American diplomacy. As part of this program, the Johnson Center also will host an annual conference that will convene practitioners and scholars from around the world to discuss contemporary issues in international affairs.

“Yale is honored,” President Levin said, “to be chosen as the home for the papers of Dr. Kissinger, who has been among the major figures of the past century in shaping U.S. foreign policy.  The papers will provide an extraordinary resource for future scholarship, and we are deeply grateful to Charlie Johnson for providing funds to support the maintenance of the Kissinger Archives as well as scholarship and teaching in the field of diplomacy.”

“I am extremely pleased to be associated with Yale in this important new initiative,” remarked Dr. Kissinger.  “My two children attended Yale College, and I have participated for many years in the teaching of Yale’s extraordinary program in Grand Strategy.  With its remarkable array of academic programs and library collections in world affairs, as well as its established involvement with practitioners of international security and diplomacy, Yale will make a superb home for my papers.”

“The Johnson Center will be a wonderful addition to the work of the Jackson Institute for Global Affairs,” said James Levinsohn, the Institute’s Director. “We are excited at the prospect of hosting visiting diplomats and scholars who will advance teaching and scholarship in diplomatic history and international relations.”

“Yale students have long studied Henry Kissinger as a distinguished historian and practitioner of grand strategy,” observed Professor John Lewis Gaddis, Director of the Brady-Johnson Program in Grand Strategy. “To have his papers here at Yale is an extraordinary opportunity, both for Yale and for the field of diplomatic history in its broadest sense.”

Dr. Henry A. Kissinger served as the 56th U.S. Secretary of State from 1973 to 1977, while continuing to hold the position of Assistant to the President for National Security Affairs, which he first assumed in 1969, until 1975. Born in Germany, Dr. Kissinger came to the United States in 1938 and served in the U.S. Army during World War II. He received his B.A. from Harvard College and his M.A. and Ph.D. degrees from Harvard University, where he was a member of the faculty from 1954 to 1971. After leaving government service, he founded Kissinger Associates, the renowned international consulting firm.

Dr. Kissinger has written numerous books and articles on United States foreign policy, international affairs, and diplomatic history, including a three-volume memoir of his service in the Nixon and Ford administrations, the most thorough of any American statesman in the post-World War II era. His latest book, On China, a major analysis of Sino-American relations in the light of the Chinese grand strategic tradition, was published last month. Dr. Kissinger is a recipient of the Nobel Peace Prize (1973), the Presidential Medal of Freedom (1977), and the Medal of Liberty (1986).

The Jackson Institute for Global Affairs, which will house the Johnson Center for the Study of American Diplomacy, is the centerpiece of Yale’s efforts to internationalize its teaching curriculum, to attract the most talented students and scholars to Yale from around the world, and to deepen the University’s engagement abroad. Established in April 2009 with a gift from John W. and Susan G. Jackson, the Institute administers Yale’s International Relations Master’s program as well as the Global Affairs undergraduate major. The Jackson Institute also provides career counseling and placement assistance to students wishing to pursue a career in public service.