The release of volatile organic compounds from Earth’s forests and smoke from wildfires 3 million years ago had a far greater impact on global warming than ancient atmospheric levels of carbon dioxide, a new Yale study finds.

The research provides evidence that dynamic atmospheric chemistry played an important role in past warm climates, underscoring the complexity of climate change and the relevance of natural components, according to the authors. They do not address or dispute the significant role in climate change of human-generated CO2 emissions.

Using sophisticated Earth system modeling, a team led by Nadine Unger of the Yale School of Forestry & Environmental Studies (F&ES) calculated that concentrations of tropospheric ozone, aerosol particles, and methane during the mid-Pliocene epoch were twice the levels observed in the pre-industrial era — largely because so much more of the planet was covered in forest.

Those reactive compounds altered Earth’s radiation balance, contributing a net global warming as much as two to three times greater than the effect of carbon dioxide, according to the study, published in the journal Geophysical Research Letters. 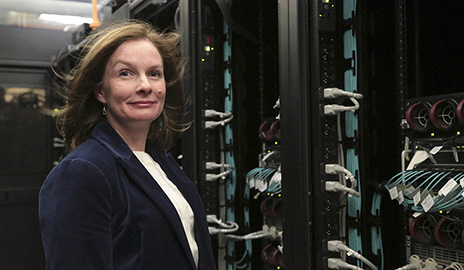 These findings help explain why the Pliocene was two to three degrees C warmer than the pre-industrial era despite atmospheric levels of carbon dioxide that were approximately the same as today, Unger said.

“The discovery is important for better understanding climate change throughout Earth’s history, and has enormous implications for the impacts of deforestation and the role of forests in climate protection strategies,” said Unger, an assistant professor of atmospheric chemistry at F&ES.

“The traditional view,” she said, “is that forests affect climate through carbon storage and by altering the color of the planet’s surface, thus influencing the albedo effect. But as we are learning, there are other ways that forest ecosystems can impact the climate.”

The albedo effect refers to the amount of radiation reflected by the surface of the planet. Light-colored snowy surfaces, for instance, reflect more light and heat back into space than darker forests.

Climate scientists have suggested that the Pliocene epoch might provide a glimpse of the planet’s future if humankind is unable to curb carbon dioxide emissions. During the Pliocene, the two main factors believed to influence the climate — atmospheric CO2 concentrations and the geographic position of the continents — were nearly identical to modern times. But scientists have long wondered why the Pliocene’s global surface air temperatures were so much warmer than Earth’s pre-industrial climate.

The answer might be found in highly reactive compounds that existed long before humans lived on the planet, Unger says. Terrestrial vegetation naturally emits vast quantities of volatile organic compounds, for instance. These are critical precursors for organic aerosols and ozone, a potent greenhouse gas. Wildfires, meanwhile, are a major source of black carbon and primary organic carbon.

Forest cover was vastly greater during the Pliocene, a period marked not just by warmer temperatures but also by greater precipitation. At the time, most of the arid and semi-arid regions of Africa, Australia, and the Arabian peninsula were covered with savanna and grassland. Even the Arctic had extensive forests. Notably, Unger says, there were no humans to cut the forests down.

Using the NASA Goddard Institute for Space Studies Model-E2 global Earth system model, the researchers were able to simulate the terrestrial ecosystem emissions and atmospheric chemical composition of the Pliocene and the pre-industrial era.

According to their findings, the increase in global vegetation was the dominant driver of emissions during the Pliocene — and the subsequent effects on climate.

Previous studies have dismissed such feedbacks, suggesting that these compounds would have had limited impact since they would have been washed from the atmosphere by frequent rainfall in the warmer climate. The new study argues otherwise, saying that the particles lingered about the same length of time — one to two weeks — in the Pliocene atmosphere compared to the pre-industrial.

Unger says her findings imply a higher climate sensitivity than if the system was simply affected by CO2 levels and the albedo effect.

“We might do a lot of work to reduce air pollution from road vehicle and industrial emissions, but in a warmer future world the natural ecosystems are just going to bring the ozone and aerosol particles right back,” she said. “Reducing and preventing the accumulation of fossil-fuel CO2 is the only way to ensure a safe climate future now.”

The modeling calculations were performed on Yale University’s omega supercomputer, a 704-node cluster capable of processing more than 52 trillion calculations per second.