Researchers from Yale and Rice University have developed a system that uses solar energy and nanoparticles to make saltwater drinkable. The system could potentially be used off-grid in remote areas or in domestic settings.

The system, known as nanophotonics-enabled solar membrane distillation (NESMD), incorporates a porous membrane with carbon black nanoparticles. The nanoparticles use sunlight energy to heat water on one side of the membrane, which filters out salt and other non-volatile contaminants while allowing water vapor to pass through it. The results of the research are published in Proceedings of the National Academy of Sciences.

The technology comes from the Center for Nanotechnology-Enabled Water Treatment (NEWT), a multi-institutional engineering research center. Based at Rice, it includes Yale and several other partners from industry, government and other universities. Funded with an $18.5 million grant from the National Science Foundation (NSF), NEWT was founded in 2015 to provide clean water to millions of people and make U.S. energy production more sustainable and cost-effective. 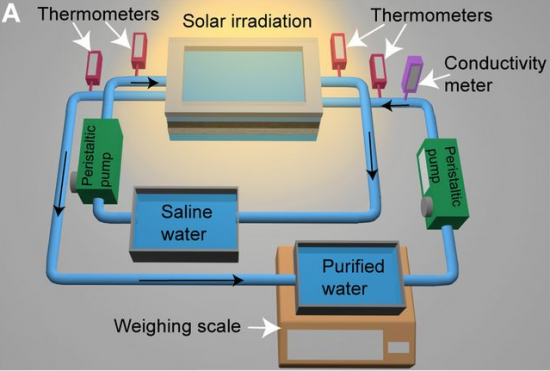 In the most widely used desalination process, saline water passes through a membrane and emerges, desalinated, on the other side. Known as reverse osmosis, it has a very high energy-efficiency, but is ineffective on water with very high salinity. Many other desalination systems involve thermal processes in which water is evaporated using heat and then condensed. While effective, the method is energy-inefficient due to the amount of heat required. Thermal processes are often situated nearby power or chemical plants that provide steam as the heat source.

There’s also membrane distillation, which uses both heat and membranes. It’s able to desalinate high-salinity water using low-grade or waste heat. However, it still requires an external heat source, which means that it needs to be connected to some form of energy infrastructure.

With the NESMD system, however, the heat source is in the membrane itself. The nanoparticles, embedded on one side of the membrane use sunlight to heat the water and drive the desalination process.

“Instead of heating the water before it comes into the module, you heat it on the membrane surface itself,” said Akshay Deshmukh, a Ph.D. student in the lab of Menachem Elimelech, Roberto C. Goizueta Professor of Chemical & Environmental Engineering. “One of the big advantages of this is that it can be used anywhere because it’s dependent on sunlight.”

The technology is still in its early stages, so the researchers are still considering a wide range of applications. Potential uses for the system include treating water produced by fracking and shale oil and gas extraction operations, and in households in less developed areas.

“The integration of photothermal heating capabilities within a water purification membrane for direct, solar-driven desalination opens new opportunities in water purification,” said Elimelech, a co-author of the new study and NEWT’s lead researcher for membrane processes.

“It requires minimal pumping energy for optimal distillate conversion, and there are a number of ways we can further optimize the technology to make it more productive and efficient,” she said.