Writer describes the ways humans are fueling ‘The Sixth Extinction’

“I see myself as a translator who translates science into a language that someone like me, a literature major, can understand,” said New Yorker writer Elizabeth Kolbert during a recent talk on campus. “Science tends to be written in a very different language, one that non-scientists can’t relate to, a language that isn’t even English.”

The scientific language that Kolbert has most recently “translated” relates to current extinction research. — hence the title of her talk, “The Sixth Extinction,” which she presented at a Nov. 11 event co-sponsored by the Poynter Fellowship in Journalism and the Franke Program in Science and the Humanities. 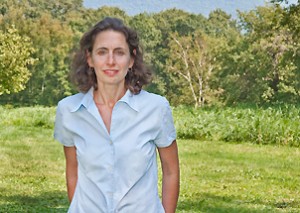 Kolbert began by introducing her audience to a bird named Oli, an Alala, a species of endangered crow native to Hawaii. Like the crows of New Haven, Oli is a large black bird, but there are some distinctions, Kolbert pointed out. For example he has a larger beak and longer legs. Before humans arrived on the Hawaiian archipelago, she noted, there were several species of crow, but with the human-wrought habitat destruction, avian malaria-carrying mosquitoes, and introduction of new predators, all species but the Alala disappeared. But even the Alala are dying out and are now extinct in the wild, she said.

Crows are known to mimic human sounds, and Kolbert told the audience that when Oli is fed, he repeats the phrase “I know, I know, I know” over and over again — which the writer said she interprets as a greater knowledge by the animal kingdom of the destruction human kind is inflicting on their very existence.

Kolbert points out that extinction is not a new process: In the Earth’s history, there have been five previous mass extinctions. However, she noted, many scientists believe that humankind has begun a sixth extinction, because people are changing the world in such a drastic way and in an incredibly quick time frame that it is just as destructive as, say, an asteroid.

She went on to explain that there are three main ways humans are driving this extinction process on such a massive scale. First, we are altering the atmosphere, she said, noting that human beings add 10 billion metric tons of fossil fuels to the atmosphere each year. In so doing, Kolbert explained, we are in a sense rewinding the geological clock at an incredible speed by taking carbon that was buried in the earth for hundreds of millions of years and returning it to the atmosphere.

The CO2 that is released has certain geophysical properties that make it a greenhouse gas, trapping heat in the atmosphere and causing rapid temperature increases, she said, noting that the effects of this resulting climate change are more extreme at the poles, but will in the end be more severe in the tropics — where the highest density of a wide variety of species live.

The second, and related, way humans are contributing to this extinction process is through the acidification of the oceans, said Kolbert. When CO2 dissolves in water, it forms an acid that, although weak, is enough to change the chemistry of the ocean, she explained, pointing out that one-third of the CO2 released since the Industrial Revolution —  or about 150 billion metric tons — has been absorbed by the ocean. The net result is that the acidity of the ocean has changed by 30%. Acidification makes it tougher for any creature that makes a shell out of calcium carbonate to survive, said the writer, noting that there are many such species in the ocean and that many other animals rely on these shelled creatures for their own survival.

The third way humans are fueling extinction concerns the movement of species around the world, said Kolbert, noting that this can be done both intentionally and unintentionally. She pointed as an example the rats that the Maori people intentionally brought with them as a food source during their original colonization of New Zealand. These rats, however, ravaged the flightless bird species on the island, which had evolved without the threat of land predators. When Europeans arrived on the island, they also brought rats, this time unintentionally, which again ravaged whatever was left of the bird populations.

This movement of species is something humans do all the time without thinking about it, contended Kolbert, pointing out that most Americans have non-native plants in their gardens and non-native species as pets. All told, around 10,000 species are moved around the world every year, and this is another example of rewinding the geological clock, she said: We are bringing creatures together who have evolved separately for years. Thus in a sense, she said, we are bringing the continents back together in a kind of “neo-Pangaea.”

Kolbert concluded by stating “I’m not going to offer any way out of this, because I don’t have one,” but she did add that “if there were ever a reason for scientists and humanists to be in communication, it’s this one.”

After all, she said, this human-wrought extinction will be “far more lasting than anything anyone in the humanities has created, even Shakespeare and Tolstoy.”