A new study of sediments laid down shortly after an asteroid plowed into the Gulf of Mexico 65.5 million years ago, an event that is linked to widespread global extinctions including the demise of big dinosaurs, suggests that lowly worms may have been the first fauna to show themselves following the global catastrophe.

While the focus on the so-called K-T boundary extinction is often on the survival and proliferation of mammals, paleo-botanical studies show some of the earliest terrestrial ecosystems to emerge were dominated by low-diversity and opportunistic aquatic plants, said University of Colorado Boulder geological sciences Associate Professor Karen Chin. And while sediments laid down immediately following the impact event generally have relatively few animal fossils, new evidence from North Dakota shows networks of crisscrossing burrows less than three inches above the K-T boundary layer.

“Fossil burrows provide direct evidence of animal activity that occurred right at that spot, and these burrows are quite extensive,” said Chin, who said their characteristics suggest they were probably produced by worms. “To my knowledge, such burrows haven’t been documented in terrestrial environments this close to the K-T boundary. This is a glimpse of a world we don’t know very much about yet.” 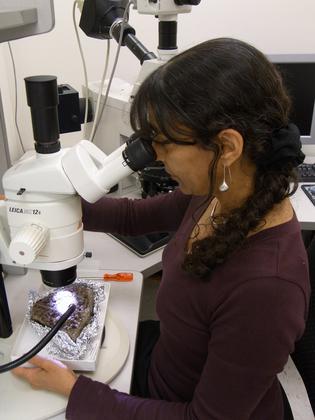 While Chin and her colleagues are still working to understand the timing of the fossil burrows as they relate to the K-T extinction boundary, Chin said she believes that they likely were made within a few thousand years after the extinction event. Future studies should help narrow that window, said Chin, who also is curator of paleontology at the University of Colorado Museum of Natural History.

Chin gave a presentation on the new findings at the 2011 annual meeting of the Geological Society of America being held this week in Minneapolis. Co-authors on the study were A.A. Ekdale of the University of Utah and Dean Pearson of the Pioneer Trails Regional Museum in Bowman, N.D.

The three-dimensional burrows were found at the interface of a layer of coal and a layer of siltstone in southwestern North Dakota by Pearson, who has spent many years studying K-T boundary sites in the state. The decomposing organic matter in the ancient environment would have provided a food source for the worms. A few of the burrows were topped by a thin layer of coal, suggesting that the underlying coal may contain additional, earlier worm burrows that are not readily apparent, Chin said.

The clay boundary layer laid down at the end of the Cretaceous Period is associated with high levels of iridium, an element rare in Earth’s crust but abundant in asteroids. The Manhattan-sized asteroid plowed into Earth at 150 times the speed of a jet airliner and is thought to have released about a billion times more energy than the Hiroshima atomic bomb, triggering tremendous dust and ash storms, wildfires, tsunamis, mega-earthquakes and dark, cold “nuclear winter” conditions for a time.

The North Dakota fossil worm burrows indicate the creatures probably were about the diameter of an average earthworm. The burrows indicate horizontal rather than vertical movement through the substrate, likely reflecting feeding activity, Chin said.

The study indicates the burrows were made in a peat-producing, bog-like environment that eventually was buried by sediment. Chin said the worms must have been capable of withstanding the challenging environmental stresses of flooded habitats, including prolonged inundation, low oxygen and acidic conditions.

Since the ancient burrows were filled by sediment, they actually are “positive casts” of the trails made by the worms. The burrows are examples of “trace fossils,” which also include tracks and fossilized feces, or coprolites. “When we reconstruct past environments, soft-bodied animals like worms get short-shrift since they don’t stand out in the fossil record like animals with mineralized skeletons,” said Chin. Ekdale, an expert on trace fossils, was key in analyzing the worm burrows, Chin said.

Chin said extensive work on plant fossils both before and after the K-T boundary event by Denver Museum of Nature and Science Chief Curator Kirk Johnson and his colleagues helped Chin and her research team to characterize the environment inhabited by the burrowers. Johnson’s research helped establish that terrestrial plants suffered heavy losses during the K-T extinction event, as did non-avian dinosaurs and many other terrestrial and marine organisms.

The K-T boundary commonly refers to the dividing line between the Cretaceous and Tertiary periods. Geologists now refer to it as the Cretaceous-Paleogene, or K-Pg boundary event. While a number of vertebrates survived the event — including birds, snakes, lizards, turtles, fish and small mammals — fossil burrows provide direct evidence of animal activity that skeletal fossils cannot show, said Chin. “The fact that the burrows are so close to the K-T boundary is one reason they are so exciting.”