Imagine you consider lending $2,000 to one of two borrowers on a crowdfunding website. The borrowers are identical in terms of their demographic and financial characteristics, the amount of money they wish to borrow, and their reason for borrowing the money. However, the text they provided when applying for a loan differs.

Borrower No. 1 writes: “I am a hard working person, married for 25 years, and have two wonderful boys. Please let me explain why I need help. I would use the $2,000 loan to fix our roof. Thank you, God bless you, and I promise to pay you back.”

Borrower No. 2 writes: “While the past year in our new place has been more than great, the roof is now leaking and I need to borrow $2,000 to cover the cost of the repair. I pay all bills (e.g., car loans, cable, utilities) on time.”

It might surprise you to know that based solely on these different word choices, borrower No. 1 is eight times more likely to default on your loan than borrower No. 2, according to research from the University of Delaware’s Michal Herzenstein.

“The words we use matter in predicting our future behavior,” said Herzenstein, who is an associate professor of marketing at UD’s Alfred Lerner College of Business and Economics. “Ours is the first paper that shows it at the individual level. Other papers show it in aggregate — for example, Twitter can predict elections results, Amazon reviews can predict the manufacturer’s stock price fluctuations, car reviews can predict market share, etc.”

To find these results, Herzenstein and her coauthors, Oded Netzer and Alain Lemaire from Columbia University, used text-mining and machine-learning tools to automatically process and analyze the raw text in over 120,000 loan requests from an online crowdfunding platform. The result became the paper “When Words Sweat: Identifying Signals for Loan Default in the Text of Loan Applications,” recently accepted for publication by the Journal of Marketing Research. 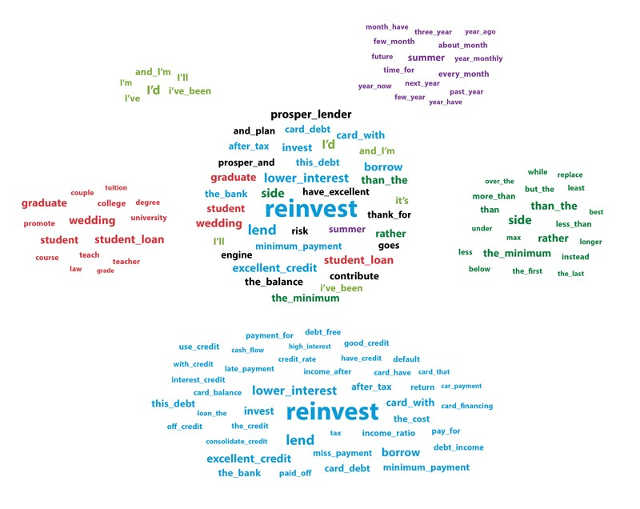 Herzenstein added that what’s especially interesting about the findings is that even words that aren’t related to finances are significant in predicting behavior. It’s not surprising, for example, that people who talk about unsecured, high-interest payday loans are more likely to default.

Instead, she said, “What’s really cool is the pronouns and words that seem meaningless like ‘rather.’ These are the words that in spoken language we usually cannot track — how many times do you say ‘I’ in a casual conversation? We don’t really know, but those words are meaningful in predicting behavior.” Both “rather” and “I,” she said, are examples of words more likely to be used by people who repay their loans.

What can individuals and lenders learn from this research? Whether you’re applying for a loan or loaning someone money, consider that even the most innocuous of words can help make important predictions about behavior and outcomes.