When a group of five high school students embarked on Project Shiphunt, an expedition in search of lost shipwrecks, in May in Lake Huron, the Woods Hole Oceanographic Institution’s Advanced Imaging and Visualization Lab (AIVL) was there, surveying and capturing 3D footage of the finds. The work was conducted as part of Project Shiphunt, an initiative developed by Sony and Intel Corp and led by National Oceanic and Atmospheric Association (NOAA).

“It was gratifying to be a part of a project that engages kids in the excitement of exploration and discovery,” said Bill Lange, director of AIVL. Lange led a crew of videographers, divers and pilots of two remotely operated vehicles (ROV) during the expedition. “Our Sony cameras gave the students the ability to have that experience in real time and in some cases to direct the cameras to investigate specific features of the wreck.  The high-definition footage we collected will be invaluable to scientists and marine archaeologists working to learn from the wrecks.” 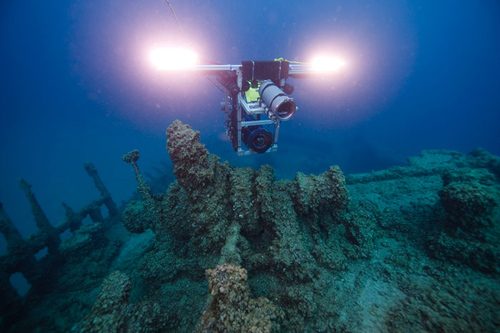 The larger of two remotely operated vehicles (ROVs) AIVL used for Project Shiphunt is capable of carrying up to five cameras of HD or better resolution and over 150000 lumens of LED light. Shown here during a "work up" dive, the ROV surveys the deck of the Grecian, another wreck located in Lake Huron. Photo by Advanced Imaging and Visualization Lab, Woods Hole Oceanographic Institution

While in relatively shallow depth, the Thunder Bay wrecks were found in water deeper than the dive teams had been expecting, making the operations a little more challenging. It gave the divers less time in the water (which was a very cold 34 degrees F) and made greater demands on the camera’s lighting systems as it was considerably darker and murkier at these depths.

Conducting their operations from the NOAA vessel the Laurentian, the AIVL team significantly modified two small ROVs to equip them with the necessary lighting and cameras for the mission. Four divers operating from a second vessel, the Interseas Explorer, used hand-held Sony 3D cameras to visually document and inspect the wrecks found in the deep water.

During the expedition, the NOAA team worked with the students to locate targets based on data from NOAA Thunder Bay National Marine Sanctuary and other maps generated by the ship’s multibeam sonar.  They used the historical record of ships known to have been lost in the area to develop criteria that would help them positively identify a wreck. 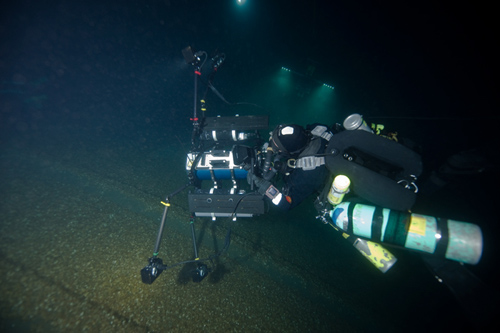 The lights of the AIVL remotely operated vehicles (ROVs) shine in the distance as a diver uses Sony 3D cameras to visually document and inspect the wreck of the steel freighter Etruiria, discovered in Lake Huron during Project Shiphunt. Photo by Advanced Imaging and Visualization Lab, Woods Hole Oceanographic Institution

“There was a lot of excitement when we saw the first wreck come up in the monitors,” said Evan Kovacs, AIVL director of 3D photography and stereographer on-site at Thunder Bay. “It was pretty obviously not the ship they were originally looking for, so they quickly regrouped with the historians and came up with a whole list of objectives for the ROV pilots and dive team.  The kids were calling the shots and they had us looking for damage in one section, checking for name plates on another part of the hull, checking for the cargo – they even had us looking for ship numbers scratched into the hold combings.  It was quite a tall order on a 20-minute dive to 330 feet!”

The ROVs sent live 3D HD video back to the students aboard the Laurentian, giving them the first glimpse of the ships since they met their untimely end.  The students even took turns piloting one of the ROVs – giving them the power to direct the visual inspection and perhaps sparking new directions in their future course of study.

“One of the kids actually decided he wanted a career as an ROV pilot,” said Kovacs.

“The state-of-the-art Sony 2D and 3D cameras we used, coupled with the new Sony Vaio computers, made this an incredible immersive teaching experience for not only the students but for the scientists as well,” added Lange. 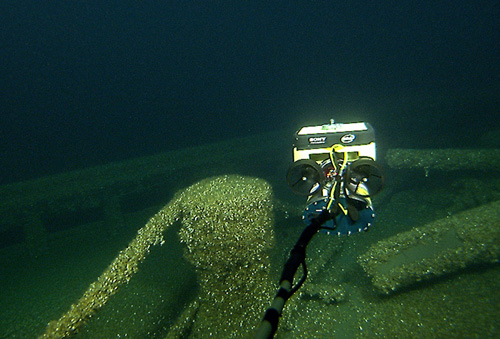 Sony and Intel’s Project Shiphunt team announced the discovery of shipwrecks the schooner M.F. Merrick and the steel freighter Etruria.

The AIVL team is experienced in visually documenting undersea features, having developed their camera systems for scientific exploration of natural formations on the seafloor as well as exploration of historic wrecks, like the Brittanic, the Titanic, and the USS Arizona.

“Our goal is to take the tools we’ve developed here over 20 years and make them useful for marine archaeology and marine forensics,” said Lange. “Sometimes a diver can damage an archaeological site; other times it is too deep to send a diver. Our imaging systems, whether in the hands of divers or mounted on a vehicle of choice, can save researchers a lot of time, money, and man-power and still allow them to collect valuable data.

“One of the most beneficial aspects of 3D surveys with our systems is that you can easily view deterioration or changes on a wreck site over time. The “byproduct” is that the 3D footage is truly immersive and if viewed properly it will capture minds and imaginations like no other tool available today,” said Kovacs.

And viewing historic wrecks in 3D brings these seafloor time capsules to life in ways that haven’t been seen –or perhaps imagined – before.