Wolves in Chernobyl could spread to other areas, help support other populations

Long free of humans, the site of a nuclear disaster may play an important role in wildlife conservation in the region.

COLUMBIA, Mo. – The Chernobyl Exclusion Zone (CEZ) is a 1,660 square mile area surrounding the remains of the Chernobyl Nuclear Power Plant, which exploded on April 25, 1986, and released large amounts of radiation into the area. Living in the zone remains prohibited 32 years later, and the resulting lack of human presence has led some to call the zone a de-facto nature reserve.

In particular, the gray wolf population in the zone has flourished, with the population density estimated to be up to seven times larger than in other nature reserves in the region. Now, for the first time, a researcher at the University of Missouri has tracked a wolf moving far outside the zone for an extended period of time, demonstrating that young wolves inside the CEZ are moving beyond it and potentially interacting with other wolf populations.

“When wolf populations get as dense as they are in the zone, the young must spread out to find their own space and resources,” said Michael Byrne, an assistant professor in MU’s School of Natural Resources and lead author on the study. “This young wolf was doing just that, and it shows us for the first time that Chernobyl wolves are dispersing into other areas.” 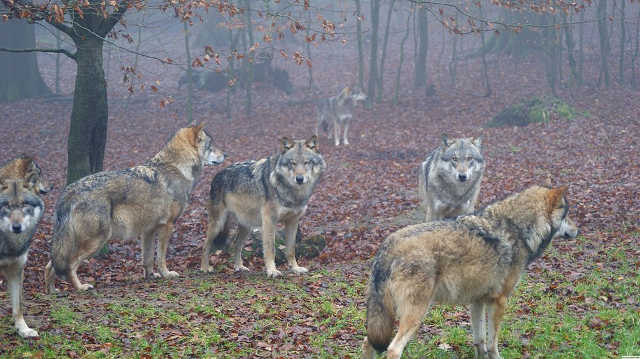 Researchers, working in conjunction with the Savannah River Ecology Laboratory at the University of Georgia, tracked 14 gray wolves in the Belarussian region of the zone—13 adults over 2 years old and one juvenile 1-2 years old—by fitting them with GPS collars. While the adult wolves maintained home ranges within the CEZ, the juvenile roamed far beyond the boundaries. The young wolf began to consistently move away from its home range three months after researchers began tracking its movements. Over the course of 21 days, the wolf traveled over 229 miles, ending up about 180 miles outside the zone.

Due to a malfunction in the GPS collar, researchers were unable to determine if the wolf eventually returned to the zone or remained outside permanently. Still, the study represents the first observation of a wolf dispersing beyond the CEZ, indicating a possible connection between wolf populations outside the zone with wolves from within. According to Byrne, the zone has the potential to help ensure the connectivity of wildlife populations across the larger landscape, making gray wolves in the region more resilient as a species.

“The age of this particular wolf suggests that it was born within the zone,” Byrne said. “We can assume that other young wolves may also disperse into outside areas, suggesting that the zone may act as a source that can augment surrounding populations, assuming wolves that leave the zone can successfully navigate the surrounding landscape. Given the abundance of wildlife in the zone in general, this may be the case for other species as well, and it highlights how the zone might have an important role to play in regional conservation. There may be positive effects of the zone as a refuge that extend beyond its borders, and that represents an interesting area of future research.”

The specter of radiation naturally haunts any discussion of Chernobyl, and the study does raise the possibility that wildlife dispersing from the CEZ could spread mutations to other populations. However, scientists remain divided about whether radiation exposure has had a lasting impact on the animal populations within the CEZ. This study highlights the need for further research on how wildlife respond to radiation exposure in the zone.

The study, “Evidence of long-distance dispersal of a gray wolf from the Chernobyl Exclusion Zone,” was published in the European Journal of Wildlife Research. Other researchers involved in the study were Sarah Webster, Stacey Lance, Cara Love and James Beasley of the Savannah River Ecology Laboratory, Thomas Hinton of the Institute of Environmental Radioactivity at Fukushima University, and ecologist Dmitry Shamovich of Sosnovy Bor, Belarus. Funding was provided by the U.S. Department of Energy (award number DE-FC09-07SR22506), the National Geographic Society, the Institut de Radioprotection et de Surete Nucleaire and the Norwegian Radiation Protection Authority. The School of Natural Resources is located in the College of Agriculture, Food and Natural Resources. The content is solely the responsibility of the authors and does not necessarily represent the official views of the funding agencies.