Within ‘Habitable Zone,’ More Planets than We Knew

The number of known places in our galaxy theoretically hospitable to life may be significantly greater than previously thought, according to new research.

Researchers with Planet Hunters are reporting the discovery of a Jupiter-sized planet in the so-called “habitable zone” of a star similar to Earth’s sun, as well as the identification of 15 new candidate planets also orbiting within their star’s habitable zone.

Within the zone, atmospheric temperatures range from -126 to 86 degrees Fahrenheit. The scientists say a rocky planet there with a greenhouse atmosphere could have pools of liquid water, and thus the possibility of life. The discovery of the new candidate planets nearly doubles the number of gas giant planet candidates known to be orbiting within the habitable zones of solar stars.

“This is just a first step toward finding a habitable world elsewhere,” said Ji Wang, a postdoctoral researcher at Yale and lead author of a paper about the new discoveries. “Any moon around this newly discovered, Jupiter-sized planet might be habitable. It’s very similar to what was depicted in the movie ‘Avatar’ — the habitable moon Pandora around a giant planet, Polyphemus.” 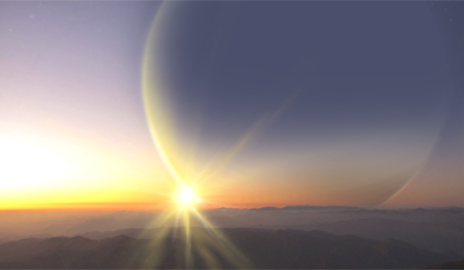 This artistic rendition is a hybrid photo-illustration showing a sunset view from the perspective of an imagined Earthlike moon orbiting the giant planet PH2 b. (Illustration by H. Giguere, M. Giguere/Yale University)

The paper is available on the Planet Hunters website and has been submitted to The Astrophysical Journal. Researchers are scheduled to present the results at the 221st meeting of the American Astronomical Society in Long Beach, Calif., Jan. 6-10.

Conditions on the new planet, gas giant PH2 b, and the 15 candidate planets probably could not support life, given their largely gaseous state, the astronomers said. But they could have rocky satellites that would.

Planet Hunters is a joint project of Yale University and several other institutions. It enlists volunteers to help professional astronomers detect planets outside Earth’s solar system by sifting massive amounts of data gathered by NASA’s Kepler spacecraft. Professional scientists review the most promising findings. Worldwide, more than 200,000 volunteers have participated since 2010.

The latest findings also establish that Planet Hunters’ volunteers are effective detectors of long-period planet candidates, or those residing in or near a habitable zone, the paper’s authors said.

“We are seeing the emergence of a new era in the Planet Hunters project where our volunteers seem to be at least as efficient as the computer algorithms at finding planets orbiting at habitable-zone distances from the host stars,” said Debra Fischer, a Yale astronomy professor and co-founder of Planet Hunters.

In all, the new paper reports the discovery of one confirmed planet, PH2 b, and 42 candidate planets. Of these, at least 15 appear to be orbiting in their star’s habitable zone, researchers said.

Astronomers on the Planet Hunters team declared PH2 b to be a bona fide planet with a confidence level of 99.92%.

Since its establishment, Planet Hunters has reported finding a total of 48 previously unknown candidate planets. PH2 b is its second confirmed planet. The first, PH1, was reported in October.

Planet Hunters volunteers typically find candidate planets by identifying faint dips in light caused by planets as they pass in front of their host stars. In this case, professional scientists also used high-resolution spectrograph and adaptive optics to rule out false positive detections and to calculate confidence levels for their findings.

Kian Jek of San Francisco, a lead volunteer on the project, described himself as “someone who grew up with the Apollo moon landings, whose childhood imagination was fired by Kubrick’s ‘2001’ and the original ‘Star Trek.’”

“I never had any doubt that planets around other stars existed and that one day we would discover them,” he continued. “But I never dreamed that we would find them in my lifetime, let alone that I would be involved in their discovery. Planet Hunters is an exciting project that allows citizens and scientists to participate in pushing ‘the final frontier’ ever slightly further.”

A full list of authors is included in the paper (hyperlink above).