After a two-week fellowship in Europe where they explored the history and infrastructure of Nazi genocide, two Warren Alpert Medical Students returned with resolve to recognize injustices in modern medicine.

PROVIDENCE, R.I. [Brown University] — By the time the students arrived at Auschwitz-Birkenau, they were prepared — they had read texts about the Holocaust, spoken with a survivor, viewed Berlin’s memorials and toured the halls where the Nazi regime planned its “euthanasia” and Final Solution campaigns to murder millions. But for Hyunwoo June Choo and Alexa Kanbergs, standing on the grounds of the Nazi killing center transformed merely knowing of these historical events into feeling them, vividly and palpably.

Monday, June 26, was a lovely summer day in Poland, Kanbergs recalled. She was struck by how the buildings of Birkenau, where Nazis gassed as many as 6,000 Jews a day to death, stood in juxtaposition with the beautiful surrounding landscape and the ubiquitous sounds of chirping birds.

“I viscerally felt something when I went to that site,” said Kanbergs, a third-year Warren Alpert Medical School student from Portland, Ore. “We had been reading about it, but you are removed from it because you are just learning about it. Then when you actually visit, it makes it a lot more real.” 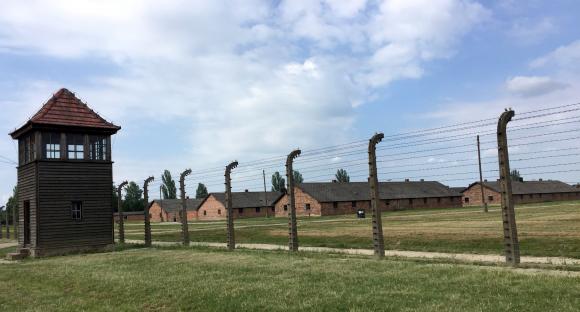 Auschwitz-Birkenau. Students visited the Nazi “killing center,” to get a first-hand look at an atrocity enabled in part by a horrific breakdown in medical ethics. Image credit: June Choo

Choo, a fourth-year medical school student from Los Angeles, was similarly struck. Organizers of the two-week program that had brought them to Germany and then Poland, the Fellowships at Auschwitz for the Study of Professional Ethics, had told them that “place has power.” In a huge camp built for the sole purpose of genocide, the meaning was clear.

“The entire week, we had been building up to this point,” Choo said. “We went to where the leaders had planned and strategized how to exterminate large masses of people. When I was actually there, I was just standing aghast at the expanse and the sheer vastness of this institution. Everything was deliberate. Everything was calculated.”

The Fellowships at Auschwitz program teaches medical, legal, business, journalism and divinity students to consider the ethics of their future professions in the context of the Holocaust’s catastrophic moral failings. Choo and Kanbergs had applied to the competitive fellowships out of a desire to transcend and therefore contemplate the day-to-day experience of their medical training.

“In medical school as students, we’re sort of thrown into wards and hospital systems and we see things — a lot of injustices play out on individual bodies,” Choo said. “We don’t really have the time or space to think through the systems behind a lot of the social circumstances that bring a patient in front of us. What this program allowed us to do was to think about ethics not as this lofty, abstract idea, but as something grounded in history.”

The point is not that inequities and injustices in the U.S. health care system have equivalence with the Nazi regime’s meticulously planned policies of mass murder, Kanbergs said. Instead, the point is to learn how to recognize and sustain clear moral vigilance in systems that produce injustice, regardless of its scale or whether it was intended.

“I don’t ever want to take away from the events that happened in the Holocaust and say that this is the same situation,”  Kanbergs said, “but I think about prisoners a lot, and I think about how we incarcerate individuals of color. I see these parallels with how we strip the rights of individuals and target certain classes of individuals. As physicians, we are put into these systems that allow for that to happen.”

The many doctors who worked for and with the Nazis utterly failed in their professional ethics, Kanbergs and Choo learned.

Doctors helped to design the Nazis’ “T-4” and “euthanasia” programs of systematically killing disabled children and adults. In that process they helped to create the extermination techniques, such as gassing, that would later be extended to Jews, Roma Gypsies and other targets of the Nazi ideology.

Doctors greeted the doomed as they arrived at concentration camps, assessing with a look whether someone was fit enough for a future of slave labor or was too weak for the purpose, Kanbergs and Choo learned. Manipulating the credibility and trust that people place in physicians, the doctors coaxed prisoners into the gas chambers with the promise that they were just getting a shower and would then be fed and reunited with their families.

Doctors, ideologically liberated from any sense that their prisoners qualified for human dignity or rights, performed horrible experiments. To punish these crimes, and to preserve a record of them, Allied forces prosecuted more than 20 Nazi physicians at the Doctor’s Trial in 1946.

Though extreme in its evils, this history nevertheless provides a framework for considering contemporary medicine, Kanbergs and Choo said, because historical perspective offers a clarity about many situations that can be harder to see while they are underway. History provides lessons for how to ask whether one’s current situation produces injustice.

Before the trip to Europe, Kanbergs’ medical studies exposed her to a case that still haunts her. She and her faculty mentor had 15 minutes to meet with a 40-year-old woman. The patient exhibited slurred speech and memory lapses. She had been abused as child by alcoholic parents and had been a heavy drinker herself since she was 14. Now incarcerated, the woman fended off suggestions that she stop drinking.

“My mentor said, ‘You know if you keep drinking like this you are going to die,’” Kanbergs recalled. “Her response was, ‘That’s the point.’ I sat there thinking, how many levels of the system had to break down to let this woman get to this point?”

Choo, whose studies have also occurred within and outside of Rhode Island’s prisons, said she recognizes deep ethical concerns in health care stemming from socioeconomic and political inequities.

“There are a lot of things we do today that are complicit with these institutions of medicine or of health,” she said. “That seems completely normal in our day-to-day operations but maybe on a structural or larger level is unjust. For example, denying health care to populations and letting them die.”

After returning to Providence in July, Choo and Kanbergs could begin to integrate the professional lessons derived from the fellowship with their experiences as students. They said they plan to carry that training forward, by being ethically vigilant in their work, by sharing their perspective with fellow students, and by holding themselves accountable to ensure justice for their patients.

“There is so much privilege in being able to take care of people and their bodies in their most vulnerable moments that we have a duty to do it in a way that is ethical and thoughtful and just and caring,” Kanbergs said.

“It takes a lot to speak up, especially in a hierarchical system like medicine,” she said. “We can look to history to find lessons as we go forward in our training. By bringing people together, that will build the power and raise a voice for things that need to be addressed or scrutinized.”

A core lesson of the fellowship program is that each student’s voice and actions can have a positive influence in a profession where moral breakdowns have proven devastating in the past.