EAST LANSING, Mich. — Witch hunts are common and sometimes deadly in the tea plantations of Jalpaiguri, India. But a surprising source – small groups of women who meet through a government loan program – has achieved some success in preventing the longstanding practice, a Michigan State University sociologist found.

Soma Chaudhuri spent seven months studying witch hunts in her native India and discovered that the economic self-help groups have made it part of their agenda to defend their fellow plantation workers against the hunts.

“It’s a grassroots movement and it’s helping provide a voice to women who wouldn’t otherwise have one,” said Chaudhuri, assistant professor of sociology and criminal justice. “I can see the potential for this developing into a social movement, but it’s not going to happen in a day because an entire culture needs to be changed.”

Witch hunts, she explained, are fueled by the tribal workers’ belief in the existence of witches and the desperate need of this poor, illiterate population to make sense of rampant diseases in villages with no doctors or medical facilities. There are some 84 million tribal people in India, representing about 8 percent of the country’s population. 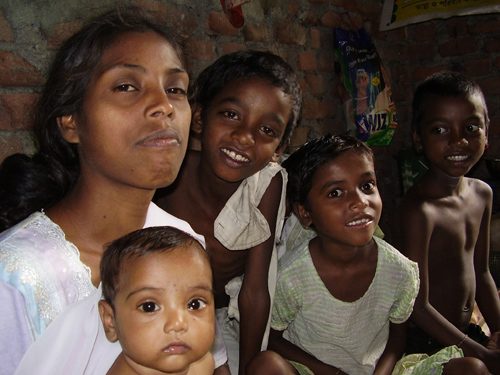 Basanti, shown here with children in her family, survived a witch hunt in India's tea plantations. Photo by Soma Chaudhuri

In 2003, at a tea plantation in Jalpaiguri, five women were tied up, tortured and killed after being falsely accused of witchcraft in the death of a male villager who had suffered from a stomach illness.

Chaudhuri interviewed the villagers at length and found that such attacks are often impulsive and that the “witch” is often killed immediately. Widespread alcoholism is also a factor, she found. 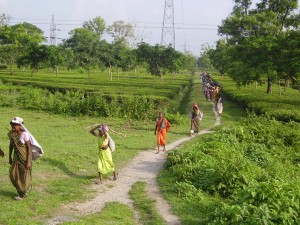 Indian women head home after a long day working in a tea plantation, which pays the equivalent of about a dollar a day. Photo by Soma Chaudhuri

But the study also documents examples of the women’s groups stopping potential attacks. In one case, a woman was accused of causing disease in livestock and an attack was planned. Members of the self-help groups gathered in a vigil around the woman’s home and surrounded the accuser’s home as well, stating their case to the accuser’s wife. Eventually the wife intervened and her husband recanted and “begged for forgiveness.”

Through the loan program, each woman is issued a low-interest, collateral-free “microcredit” loan of about 750 rupees ($18) to start her own business such as basket weaving, tailoring or selling chicken eggs. Participants meet in groups of about eight to 10 to support one another.

Chaudhuri said the loan program is run by nongovernmental activists who have been successful in encouraging the groups to look beyond the economic aspects and mobilize against domestic abuse, alcoholism and the practice of witch hunts.

Through the bonds of trust and friendship, group members have established the necessary social capital to collectively resist the deep-seated tradition of witch hunts, Chaudhuri said. 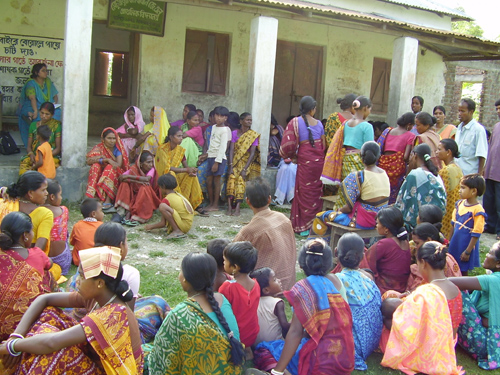 “Why would they go against something so risky, something that breaks tradition?” she said. “They do it because they believe in the ideals of the microcredit group – in women’s development, family development and gender equality.” 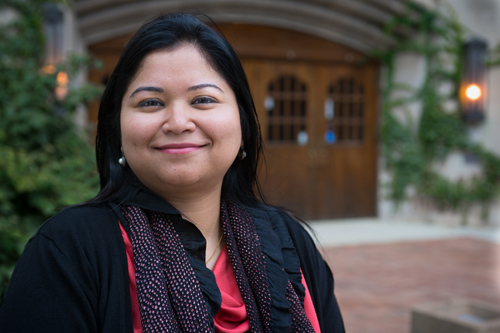 The study, which Chaudhuri co-authored with Anuradha Chakravarty of the University of South Carolina, appears in Mobilization, an international research journal.