Before coming to the University of Delaware, Jessica Weir had never heard of the International Society for Equitation Science (ISES) conference.

Now, after a year spent helping Carissa Wickens, assistant professor in the Department of Animal and Food Sciences (ANFS), set up the organization’s ninth annual conference — hosted collaboratively by UD and the University of Pennsylvania’s New Bolton Center from July 18-20 — Weir is both fully versed in the event and plans to attend the 2014 ISES session in Denmark.

Weir, a doctoral student in the College of Agriculture and Natural Resources working under the direction of Wickens and Hong Li, also an assistant professor in ANFS whose research focus is in equine nutrition — specifically in nutrient management, trying to characterize ammonia emissions and air quality on horse farms — said the local conference drew a substantial international audience, with 110 delegates representing 14 different countries. 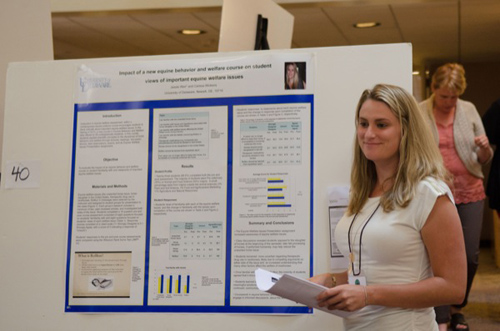 Jessica Weir with her winning poster. Photo by Danielle Quigley

The conference focused on “the research and scientific methods behind training theory for horses, but we also looked at the science behind horse behavior and welfare,” said Weir. “There are topics ranging from rein pressure with the bit all the way to ‘what’s better for a horse, being in a stall or out in a pasture,’ which is common sense but it’s nice to see the science behind it.”

For her first place poster, titled “Impact of a New Equine Behavior and Welfare Course on Student Views of Important Equine Welfare Issues,” Weir presented the outcomes from an undergraduate class that Wickens developed and taught for the first time during the spring 2013 semester.

In the equine behavior and welfare course, students conducted research into and then presented on various equine welfare topics to the rest of the class. Pre- and post-assessments were administered to gauge what the students had learned.

“The assessments were split into 16 questions,” said Weir. “Eight questions about whether they were familiar with the topic and eight that were looking at students’ opinions about each of the topics, and if they strongly agreed or strongly disagreed with each statement.” 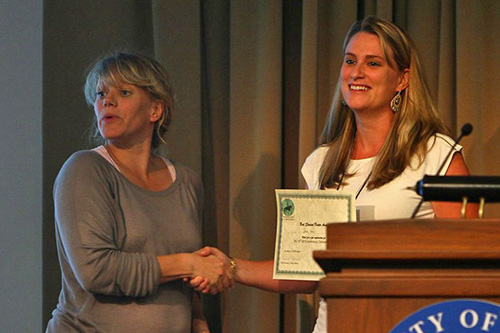 Weir’s poster looked at how the students’ views on particular welfare issues — such as horse slaughter and therapeutic drug use in race horses — changed once they had thoroughly investigated and discussed the topic. The results of the research demonstrated that all students in the class became significantly more familiar with each topic.

The data suggested that students were now able to base their views of welfare issues affecting the equine industry on scientific findings and a more complete assessment of the pros and cons associated with each issue in terms of horse welfare and with regard to the additional factors that one must consider in order to facilitate improvements in horse welfare.

As for her favorite part of the conference, Weir admitted it was the practical day program held at the New Bolton Center, where attendees were given a tour of the semi-feral pony herd and learned about how the center approaches equine health and behavior issues. “They look to see if changes in behavior are psychological, physiological or both — whatever issue is going on. They have a really holistic approach and that was well communicated during the practical day,” said Weir.

When it comes to her own love of horses, Weir said that her parents never had a chance, as the second word out of her mouth as a child was “horse.”

“I just grew up loving them. I was in pony club from a really young age. At 14, I started working in polo. I did three-day eventing and worked for some of the top professionals in the country, and it’s always been a passion,” said Weir.