*The iconic, winged dinosaur Archaeopteryx was dressed for flight, an international team of researchers led by Brown University has concluded. The group identified the color of the raven-sized creature’s fossilized wing feather, determining it was black. The color and the structures that supplied the pigment suggest that Archaeopteryx’s feathers were rigid and durable, which would have helped it to fly. Results appear in Nature Communications.*

PROVIDENCE, R.I. [Brown University] — Since its discovery 150 years ago, scientists have puzzled over whether the winged dinosaur Archaeopteryx represents the missing link in birds’ evolution to powered flight. Much of the debate has focused on the iconic creature’s wings and the mystery of whether — and how well — it could fly.

Some secrets have been revealed by an international team of researchers led by Brown University. Through a novel analytic approach, the researchers have determined that a well-preserved feather on the raven-sized dinosaur’s wing was black. The color and parts of cells that would have supplied pigment are evidence the wing feathers were rigid and durable, traits that would have helped Archaeopteryx to fly.

The team also learned from its examination that Archaeopteryx’s feather structure is identical to that of living birds, a discovery that shows modern wing feathers had evolved as early as 150 million years ago in the Jurassic period. The study, which appears in Nature Communications, was funded by the National Geographic Society and the U.S. Air Force Office of Scientific Research. 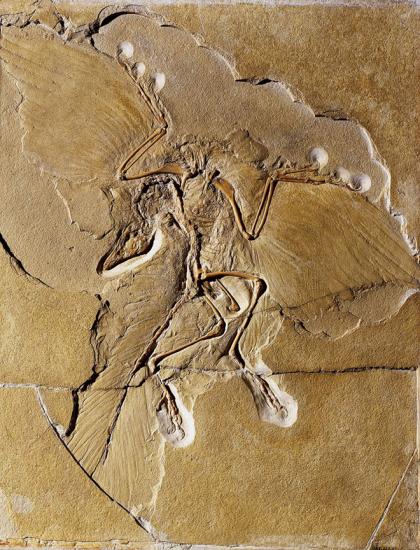 Berlin specimen of Archaeopteryx. Paleontologists have long thought that Archaeopteryx fossils, including this one discovered in Germany, placed the dinosaur at the base of the bird evolutionary tree. Image credit: Museum für Naturkunde Berlin

“If Archaeopteryx was flapping or gliding, the presence of melanosomes [pigment-producing parts of a cell] would have given the feathers additional structural support,” said Ryan Carney, an evolutionary biologist at Brown and the paper’s lead author. “This would have been advantageous during this early evolutionary stage of dinosaur flight.”

The Archaeopteryx feather was discovered in a limestone deposit in Germany in 1861, a few years after the publication of Charles Darwin’s On the Origin of Species. Paleontologists have long been excited about the fossil and other Archaeopteryx specimens, thinking they place the dinosaur at the base of the bird evolutionary tree. The traits that make Archaeopteryx an evolutionary intermediate between dinosaurs and birds, scientists say, are the combination of reptilian features (teeth, clawed fingers, and a bony tail) and avian features (feathered wings and a wishbone).

The lack of knowledge of Archaeopteryx’s feather structure and color bedeviled scientists. Carney, with researchers from Yale University, the University of Akron, and the Carl Zeiss laboratory in Germany, analyzed the feather and discovered that it is a covert, so named because these feathers cover the primary and secondary wing feathers birds use in flight. After two unsuccessful attempts to image the melanosomes, the group tried a more powerful type of scanning electron microscope at Zeiss, where the group located patches of hundreds of the structures still encased in the fossilized feather. 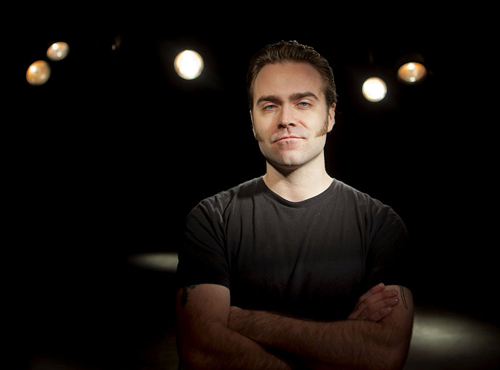 Everything old is new again. Using new research techniques and tools, Ryan Carney and colleagues determined that the 150-million-year-old Archaeopteryx feather was black, which would have provided structural advantages to the raven-sized dinosaur’s wings during flight. Image credit: Mike Cohea/Brown University

“The third time was the charm, and we finally found the keys to unlocking the feather’s original color, hidden in the rock for the past 150 million years,” said Carney, a graduate student in the Department of Ecology and Evolutionary Biology, studying with Stephen Gatesy.

Melanosomes had long been known to be present in other fossil feathers, but had been misidentified as bacteria. In 2006, coauthor Jakob Vinther, then a graduate student at Yale, discovered melanin preserved in the ink sac of a fossilized squid. “This made me think that melanin could be fossilized in many other fossils such as feathers,” said Vinther, now a postdoctoral researcher at the University of Texas–Austin. “I realized that I had opened a whole new chapter of what we can do to understand the nature of extinct feathered dinosaurs and birds.”

The team measured the length and width of the sausage-shaped melanosomes, roughly 1 micron long and 250 nanometers wide. To determine the melanosomes’ color, Akron researchers Matthew Shawkey and Liliana D’Alba statistically compared Archaeopteryx’s melanosomes with those found in 87 species of living birds, representing four classes: black, gray, brown, and a type found in penguins. “What we found was that the feather was predicted to be black with 95 percent certainty,” Carney said.

Fit for flight from Brown PAUR on Vimeo.

Next, the team sought to better define the melanosomes’ structure. For that, they examined the fossilized barbules — tiny, rib-like appendages that overlap and interlock like zippers to give a feather rigidity and strength. The barbules and the alignment of melanosomes within them, Carney said, are identical to those found in modern birds.

What the pigment was used for is less clear. The black color of the Archaeopteryx wing feather may have served to regulate body temperature, act as camouflage or be employed for display. But it could have been for flight, too.

“We can’t say it’s proof that Archaeopteryx was a flier. But what we can say is that in modern bird feathers, these melanosomes provide additional strength and resistance to abrasion from flight, which is why wing feathers and their tips are the most likely areas to be pigmented,” Carney said. “With Archaeopteryx, as with birds today, the melanosomes we found would have provided similar structural advantages, regardless of whether the pigmentation initially evolved for another purpose.”