Windows 7 to Turn Up the Decibel(s) at Music Festival

REDMOND, Wash. – Aug. 23, 2010 – Microsoft is tuning in and turning up the volume on this year’s 7th Annual Decibel International Festival of Electronic Music, Visual Art, and New Media.

Windows 7 will be the presenting partner for the portion of the Decibel (dB) Conference that features free educational panels, workshops, and screenings.

“In this environment, including DJ culture and experience, the PC – especially the PC laptop – has really revolutionized the music process,” said Darek Mazzone, a KEXP DJ and Microsoft consultant. “We want to tell as many people as possible that you can do so much more with Windows 7.”

The September 22 to 26 festival is being held in venues around Seattle’s Capitol Hill neighborhood. More than 400 acts from around the world have performed at Decibel Festival since it started in 2003. This year’s festival will feature performances and talks by Mazzone and fellow DJ Dave Pezzner, who both use Windows 7 to create, perform, and produce their music. 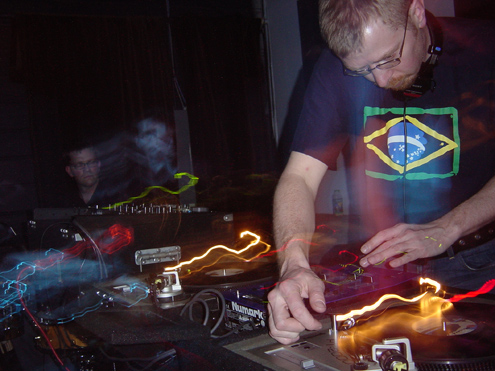 About the image: Windows DJ Darek Mazzone, along with DJ Dave Pezzner, will be performing as part of the 7th Annual Decibel International Festival of Electronic Music, Visual Art and New Media in Seattle Sept. 22-26. Windows is the Presenting Partner for this year’s dB Conference. Image credit: Microsoft

This year marks the first time Windows has sponsored the dB Conference. In many ways it’s “a big, great step for showing people how Windows 7 can support creativity in art and music environments,” Mazzone said.

Mazzone DJs a show called “Wo’ Pop” each Tuesday evening on Seattle’s KEXP radio and Web station. When he started in 1993, the music Mazzone played came primarily from major recording studios in Paris or New York. Now, he gets tracks from producers and DJs all over the world. Even from tiny villages, like one in Mali where a Peace Corps volunteer left a PC laptop behind and a couple of kids used it to start producing music.

“Now anyone with a laptop, a couple of mics, and a quiet room can create and record, and through the Internet, can share this stuff,” Mazzone said. “I could get something from Rio de Janeiro that producers and DJs there had made just that day, and I put it on my show. And then the world gets to hear it, and this all happens within a day.” 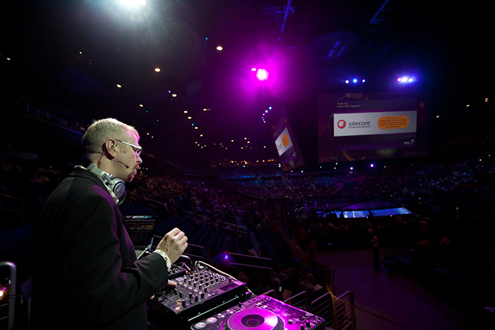 About the image: Windows DJ Darek Mazzone, along with DJ Dave Pezzner, will be performing as part of the 7th Annual Decibel International Festival of Electronic Music, Visual Art and New Media in Seattle Sept. 22-26. Windows is the Presenting Partner for this year’s dB Conference. Image credit: Microsoft

He said getting a computer in the hands of kids like that can lead to amazing things.

“This is a revolution. This is a renaissance,” Mazzone said. “Those kids never would have been heard before. Many people cannot afford to drop $2,500 on a laptop – that’s a year’s salary in some places. We’re really fighting that. Does not being able to afford a Mac mean you can’t create?”

A majority of professional DJs use Apple, and there’s a misconception that you can’t use a PC to be creative in that professional space, said Mazzone, who opened for former President Bill Clinton at this year’s Worldwide Partner Conference in Washington, D.C.

The Decibel Festival features music, technology and art in part because more and more the mediums are tied together. In the past it was nearly impossible to own and operate musical instruments, musical recording equipment, and video equipment.

About the image: Seattle will host the 7th Annual Decibel International Festival of Electronic Music, Visual Art and New Media, featuring musicians and artists from around the world. Approximately 20,000 people are expected to attend the festival and related dB Conference Sept. 22-26, 2010. Image credit: Microsoft

“People couldn’t afford all of it, didn’t have room to store it all, and there was a steep learning curve to learn to use it all,” Mazzone said.

Now, literally in one bag, people can have everything they need to produce, edit, DJ, shoot video, and perform.

“Right out of the box, with the proper software, you can start producing and expressing yourself creatively,” Mazzone said. “We are sponsoring Decibel Conference to show that.”

Mazzone and Microsoft employee Ed Chase have been championing Windows 7 in the music industry from the start, specifically noting how DJs and producers have moved away from using PCs.

“We talked about how Windows 7 was a great opportunity to start the conversation again,” Mazzone said.

Chase developed the program, and has been the driving force in get Windows 7 used in creative spaces and to educate people on what Windows 7 has to offer them. Chase and Mazzone also identified a wide selection of upcoming DJ/producers and provided them a Windows 7 music package.

“The main objective is to drive an authentic, perception-changing discussion around Windows 7 from someone deeply engaged in the product who is influential among their community,” Mazzone said. Ashley Brown, a public relations manager for Windows, said he hopes employees will help further this discussion as well, and encouraged them to check out Decibel Festival and the dB Conference.

There is a strong internal affinity for music and art at Microsoft, Brown and Mazzone said.

“It’s huge. It’s a passion across the company,” Mazzone said.

“I think it also has something to do with the creativity of Microsoft employees,” Brown said. “We all work in a creative field, and I think creative people love art and music – it’s a self-selecting thing.”

“We believe Windows 7 is a tremendous tool to help people tap into that creative spirit,” Brown added.Learn more about Decibel Festival and the dB Conference.