It’s easy to understand why natural selection favors people who help close kin at their own expense: It can increase the odds the family’s genes are passed to future generations. But why assist distant relatives? Mathematical simulations by a University of Utah anthropologist suggest “socially enforced nepotism” encourages helping far-flung kin.

The classic theory of kin selection holds that “you shouldn’t be terribly nice to distant kin because there isn’t much genetic payoff,” says Doug Jones, an associate professor of anthropology and author of the new study. “Yet what anthropologists have observed over and over is that a lot of people are pretty altruistic toward distant kin.” 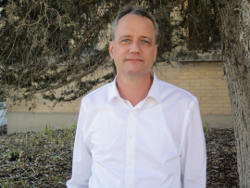 Jones seeks to expand the classic theory with his concept of socially enforced nepotism, which he calls a “souped-up version of the theory of kin selection” in his study published June 15, 2016, by the Public Library of Science’s online journal PLOS ONE.

Socially enforced nepotism “depends on the moral regulation of behavior according to socially transmitted norms,” he writes in the study.

The findings suggest that “a lot of why you help your kin, including distant kin, isn’t necessarily because you like them so much but because it’s your duty, your responsibility, and other people care whether you do it,” he says.

Basic kin-selection theory lacks social norms, so “you as an individual decide on your own how much to help somebody just because of how much you like them or don’t like them,” Jones says. “But with socially enforced nepotism, you help somebody even more because of the social pressures to do it and social rewards for helping. It improves your reputation, and improved reputation gets you more help from other people.”

He says socially enforced nepotism “may help explain the phenomenon of generalized reciprocity, where members of small-scale, kin-based societies share food and other goods because they’re supposed to, without expecting an exact return from the recipients.”

This expanded theory of kin selection reflects the fact that “we are a very special species because of how good we are at making social rules and enforcing them,” he adds. “This means relations among kin work differently in humans than in other species.”

Jones performed desktop computer simulations of small-scale societies with tens to hundreds of people. What about large and developed nations?

He says that in his theory, “it still matters that people are kin. It doesn’t work with just a random group of individuals. And though the math doesn’t work for really large groups the size of nations, the simulation might still be relevant insofar as we think of other people as our distant kin,” Jones says. “The emotions that evolved in small-scale societies might still influence how people treat distant kin, or those they think of as distant kin, in modern societies. That’s speculative but a possibility.”

Classic kin-selection theory is based on a famous biological formula named Hamilton’s rule, which deals with how altruism evolved among kin. It holds that an organism can get more of its genes into the next generation by sacrificing some of its own well-being to increase a relative’s fitness – but that holds true for closer kin and not for distant kin. In other words, “you should help people in proportion to the fraction of your genes they share,” Jones says.

His new mathematical model or simulation shows it is possible to beat Hamilton’s rule if distant kin help each other according to their reputations. Each player’s reputation depends on how much they help other people, and on the reputations of those they help.

“That may sound circular, but it works,” Jones says. “When you work through the math, it turns out that natural selection can favor a scheme where you help some members of your kin group – who will never pay you back – because it boosts your reputation and leads other group members to help you.”

Jones’ new study grew from his earlier work involving what he calls the Brothers Karamazov Game, loosely based on the novel.

“Two brothers have a chance to help a third brother,” he says. “If the two decide independently of one another whether to help, Hamilton’s rule applies. But if one approaches the other with an offer, ‘I’ll give extra help if you do too,’ then the level of altruism toward kin may be higher than the simple version of Hamilton’s rule predicts.”

Compared with that simple, three-person game, the new study “presents a more complicated case involving a game with lots of players of varying ability,” Jones says. “Players reward one another according to their reputations, where your reputation is a function of how much you help other players, and of their reputations.”

Playing a game of norms

The study used computer simulations “to see if we can come up with a model to help us understand what we see out there in the real world,” Jones says.

The simulations use game theory – which “has a bunch of people who choose different strategies and get payoffs depending on what strategies they choose and what strategies other people choose” – and population genetics, in which “the payoffs are more offspring, and you ask how does the population evolve, how does gene frequency change?”

People in the simulation followed one of two mathematical rules, which Jones says reflect social norms dictating how much a person helps others and vice versa:

— “Almost-balanced reciprocity, where you help other people only as much as they help you.”

— “Generalized reciprocity, where you might be very helpful even to someone with no ability to pay you back because other people see this, they like what they see, it boosts your reputation and they reward you for it.”

“Both rules are floating around and you see how they compete with each other in a simulation,” Jones says. “Some people follow almost-balanced reciprocity, some people follow generalized reciprocity and some compromise. Some players are really strong and can easily help other people, and others are weak and cannot.”

The simulations translated into numbers the extent to which someone helps someone else, and how much that boosts their reputation.

“The math is similar to coming up with Google ranks,” Jones says. “Google assigns every web page a certain score. Everyone’s score depends on the score of everyone who links to them.”

Help others, help yourself

After running the simulation “for a wide range of values,” Jones found that people who engage in generalized reciprocity “win the evolutionary game. People who help distant kin even when those distant kin can’t help them back have more offspring than those who insist on repayment.”

The simulations also showed that if people stuck strictly to their norms – either always expecting or not expecting something in return for help – then whichever norm was most frequent at the start of a simulation won the game. But when the simulations also included compromise norms – helping others while expecting repayment only some of the time – then generalized reciprocity predominated.

“If you’re helping distant relatives and they’re not paying you back, then all the balanced reciprocity guys [those expecting return payment for help] are looking at you and saying, ‘What a loser,’” Jones says. But if you help others and expect something in return part of the time and not at other times, “then you do better evolutionarily.”

Jones’ study notes: “Some anthropologists argue that human kinship, insofar as it is socially enforced, is divorced from biology. The argument here, on the contrary, is that kinship is uniquely elaborate and important in our species because norms that push people to treat distant kin like close kin have been favored by natural selection.”

The full study is available here.

Doug Jones’ blog about his study is here.