Why do aged muscles heal slowly?

As we age, the function and regenerative abilities of skeletal muscles deteriorate, which means it is difficult for the elderly to recover from injury or surgery. New work from Carnegie’s Michelle Rozo, Liangji Li, and Chen-Ming Fan demonstrates that a protein called b1-integrin is crucial for muscle regeneration. Their findings, published by Nature Medicine, provide a promising target for therapeutic intervention to combat muscle aging or disease. 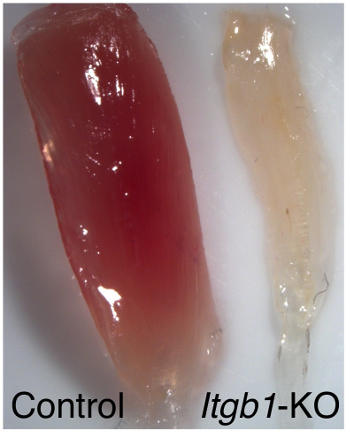 Muscle stem cells are the primary source of muscle regeneration after injury. These specialized adult stem cells lie dormant in the muscle tissue—off to the side of the individual muscle fibers, which is why they were originally dubbed satellite cells. When muscle fibers are damaged, they activate and proliferate. Most of the new cells go on to make new muscle fibers and restore muscle function. Some return to dormancy, which allows the muscle to keep repairing itself over and over again.

Rozo, the lead author, determined that the function of integrins (or, more specifically, the protein called β1-integrin) is absolutely crucial for maintaining the cycle of hibernation, activation, proliferation, and then return to hibernation, in muscle stem cells. Integrins are proteins that ‘integrate’ the outside to the inside of the cell, providing a connection to the immediate external environment, and without them, almost every stage of the regenerative process is disrupted.

The team theorized that defects in β1-integrin likely contribute to phenomena like aging, which is associated with reduced muscle stem cell function and decreased quantities of muscle stem cells. This means that healing after injury or surgery is very slow, which can cause a long period of immobility and an accompanying loss of muscle mass.

“Inefficient muscular healing in the elderly is a significant clinical problem and therapeutic approaches are much needed, especially given the aging population–and I am including myself in this population,” Fan explained. “Finding a way to target muscle stem cells could greatly improve muscle renewal in older individuals.”

Rozo and Li determined that the function of β1-integrin is diminished in aged muscle stem cells. Furthermore, when they artificially activated integrin in mice with aged muscles, their regenerative abilities were restored to youthful levels. Importantly, improvement in regeneration, strength, and function were also seen when this treatment was applied to animals with muscular dystrophy, underscoring its potential importance for the treatment of muscle disorders.

Muscle stem cells use b1-integrin to interact with many other proteins in the muscle external environment. Among these many proteins, they found a clue that one called fibronectin might be most relevant. To connect b1-integrin to fibronectin, they teamed up with another group led by scientists from the Nestlé Institute of Health Sciences, in addition to researchers from the EPFL EDBB Doctoral Program, the Leibniz Institute for Age Research, the Ottawa Hospital Research Institute, and the Max Planck Institute of Biochemistry.

They discovered that aged muscles contain substantially reduced levels of fibronectin compared to young muscles. Like b1-integrin, eliminating fibronectin from young muscles makes them appear as if they were old, and restoring fibronectin to aged muscle tissue restores muscle regeneration to youthful levels. Their joint efforts demonstrated a strong link between b1-integrin, fibronectin and muscle stem cell regeneration, which is the subject of a second paper, also published by Nature Medicine in the same issue.