Too many nutrients can cause extensive loss of marshes

Salt marshes have been disintegrating and dying over the past two decades along the U.S. Eastern Seaboard and other highly developed coastlines without anyone fully understanding why.

This week in the journal Nature, scientist Linda Deegan of the Marine Biological Laboratory (MBL) in Woods Hole, Mass., and colleagues report that nutrients–such as nitrogen and phosphorus from septic and sewer systems and lawn fertilizers–can cause salt marsh loss.

“Salt marshes are a critical interface between the land and sea,” Deegan says. “They provide habitat for fish, birds and shellfish, protect coastal cities from storms and take nutrients out of the water from upland areas, which protect coastal bays from over-pollution.”

Disappearance of healthy salt marshes has accelerated in recent decades, with some losses caused by sea-level rise and development. 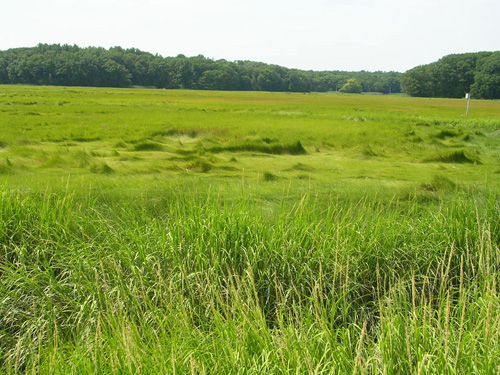 Where are all the salt marshes going? Excess nutrients may be to blame for their decline. Image credit: NSF Plum Island Ecosystems LTER Site

“This is the first study to show that nutrient enrichment can be a driver of salt marsh loss, as well,” says David Johnson of MBL, a member of the team since the project began in 2003.

This conclusion, which surprised the scientists, emerged from a long-term, large-scale study of salt marsh landscapes in an undeveloped coastline section of the Plum Island estuary in Massachusetts.

The research took place at Plum Island Ecosystems, one in a network of 26 National Science Foundation (NSF) Long-Term Ecological Research (LTER) sites located in ecosystems from coral reefs to deserts and grasslands to the polar regions.

“This is a landmark study addressing the drivers of change in productive salt marsh ecosystems, and it’s a stellar example of the value of supporting LTER sites,” says David Garrison, program director in NSF’s Division of Ocean Sciences, which supports the LTER program along with NSF’s Division of Environmental Biology. 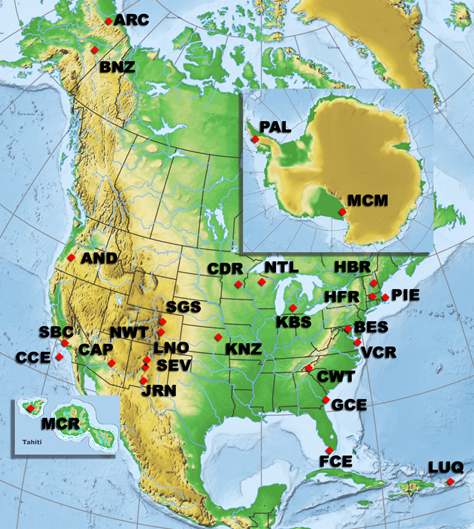 For more than nine years at Plum Island, the scientists added nitrogen and phosphorus to the tidal water flushing through the marsh’s creeks at levels typical of nutrient enrichment in densely developed areas, such as Cape Cod, Mass., and Long Island, N.Y.

A few years after the experiment began, wide cracks began forming in the grassy banks of the tidal creeks, which eventually slumped down and collapsed into the muddy creeks.

“The long-term effect is conversion of a vegetated marsh into a mudflat, which is a much less productive ecosystem and does not provide the same benefits to humans or to habitat for fish and wildlife,” Deegan says.

Until this study, it seemed that salt marshes had unlimited capacity for nutrient removal, with no harmful effects on the marshes themselves.

“Now we understand that there are limits to what salt marshes can do,” Deegan says.

“And in many places along the Eastern Seaboard–such as Jamaica Bay in New York, where marshes have been falling apart for years–we have exceeded those limits.” 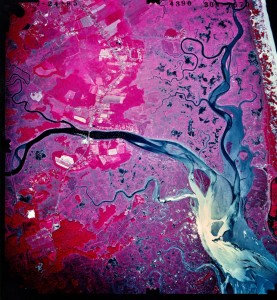 The disintegration of the nutrient-enriched marsh in this study happened in several stages.

In the first few years, the nutrients caused the marsh grass (primarily cordgrass Spartina spp.) along the creek edges to get greener and grow taller, “just like when you add fertilizer to your garden,” Deegan says.

This taller grass also, however, produced fewer roots and rhizomes, which normally help stabilize the edge of the marsh creek.

The added nutrients also boosted microbial decomposition of leaves, stems and other biomass in the marsh peat, which further destabilized the creek banks.

Eventually, the poorly rooted grass grew too tall and fell over, where the twice-daily tides tugged and pulled it. The weakened bank then cracked and fell into the creek.

By year six of the experiment, the scientists started seeing effects at higher marsh elevations above the lower creek banks.

Three times more cracks, and bigger cracks, emerged at the top of the banks parallel to the creeks, compared with a control marsh where no nutrients were added.

Eventually, parts of the higher marsh also broke off and slid down toward the creek, which the scientists call the ‘toupee effect’ because it leaves behind patches of bare, unvegetated mud.

All told, at least 2.5 times more chunks of marsh fell into the creeks in the nutrient-enriched marsh than in the control system. 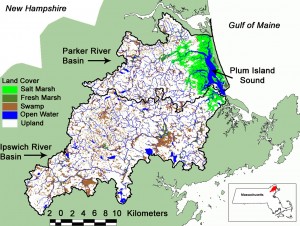 “We honestly did not anticipate the changes we measured,” says Deegan.

“Based on prior small-scale experiments, we predicted nutrient enrichment would cause the marsh grass to grow better and remain stable.

“But when we allowed different parts of the ecosystem to interact with the nitrogen enrichment over time, the small changes we saw in the first few years resulted in the creek banks later falling apart. This could not have been extrapolated from smaller-scale, shorter-term studies.”

Nutrient enrichment of coastal areas is known to cause harmful algal blooms that create low-oxygen conditions and kill off marine life.

“This is one more reason we need better treatment of household waste in our towns and cities.” 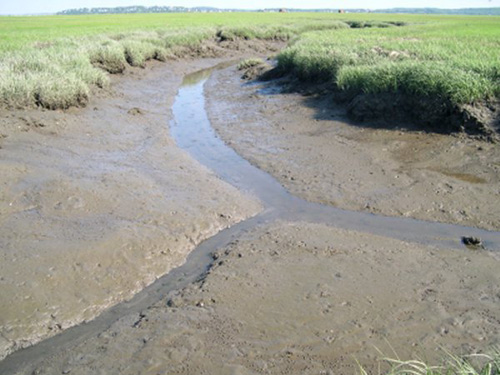 People can help by not using fertilizers on their lawns and gardens. “If you have a green lawn because you are fertilizing it, you are contributing to loss of salt marshes and ultimately of fish,” Deegan says.

The study was accomplished with the cooperation of officials from the towns of Ipswich and Rowley, Mass., and the Essex County Green Belt Association.

“They recognized the importance of the work,” Johnson says. “They realized that what we discovered would help their towns, and society in general, make better decisions about treating the excessive nutrient enrichment of our coasts.”

In the next phase of the research, the scientists will study the recovery of the nutrient-enriched marsh.

“After we stop adding the nitrogen, how long does it take the system to rebound to its natural state?” Deegan asks.

The information will be important in reclaiming the health of salt marshes that are currently suffering from nutrient enrichment. 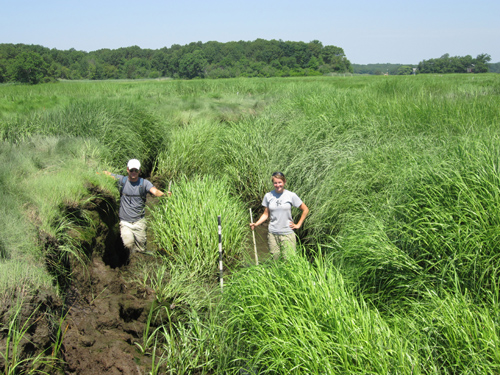 Co-authors of the Nature paper, in addition to Deegan and Johnson, are: Scott Warren of Connecticut College; Bruce Peterson of MBL, John Fleeger of Louisiana State University, Sergio Fagherazzi of Boston University and Wilfred Wollheim of the University of New Hampshire.