While Japan’s 8.9-magnitude earthquake and accompanying tsunami represent a devastating natural disaster for the country’s residents, scientists should also seize upon the massive temblor as an important learning tool for future quakes around the world, including the Pacific Northwest coast of the United States, according to experts from the Woods Hole Oceanographic Institution (WHOI).

WHOI geophysicist Jeff McGuire said such lessons may be particularly germane to residents of Northern California, Oregon, Washington and Vancouver–a region he said, could be subject to a similar quake/tsunami scenario. “Today’s earthquake happened on a subduction zone thrust fault where the Pacific plate subducts, or dives, under the Japanese islands,” he said. “Japan regularly has large earthquakes and tsunamis all along its east coast due to subduction.

“The west coast of the U.S., offshore of Oregon, Washington, Northern California, and Vancouver Island Canada, has a similar subduction zone that we think had similar size earthquakes regularly in the past, based on geologic evidence. The last one was in AD 1700, and they have a 250- to 500-year repeat time.  There are no historical records from Oregon/Washington at that time, but the tsunami it generated was so large that it killed people in Japan.”

McGuire has also studied foreshocks extensively, a phenomenon in which a smaller quake seems to foreshadow a larger one. “A few percent of earthquakes will trigger an event that is larger than the first event,” he said. 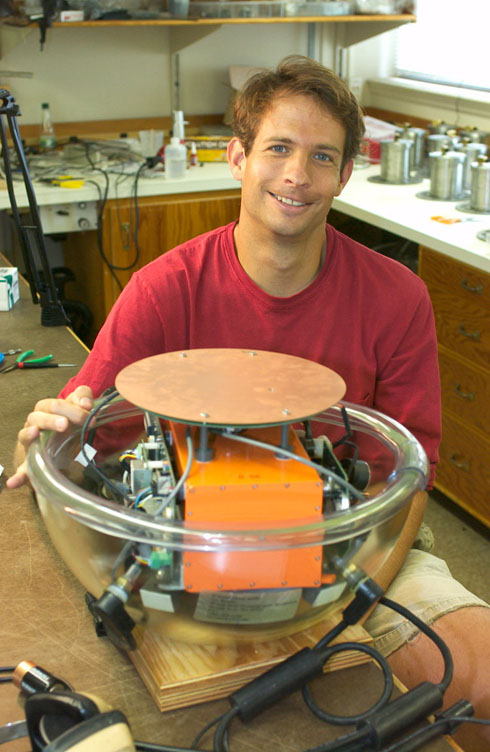 WHOI earthquake seismologist Jeff McGuire has studied foreshocks extensively, a phenomenon in which a smaller quake seems to foreshadow a larger one. He and his colleagues have developed a new suite of ocean bottom seismometers (OBSs) capable of accurately recording both foreshocks and mainshocks “A few percent of earthquakes will trigger an event that is larger than the first event,” he said. (Image credit: by Tom Kleindinst, Woods Hole Oceanographic Institution).

That scenario may have been at work in the Japan quake—formally identified as the N Honshu earthquake, according to WHOI Senior Scientist Jian Lin, currently on a research cruise in the Southern Ocean aboard the Korean icebreaker R/V Araon. Lin noted that a sizeable foreshock preceded the Japan quake.

“What is noticeable about the March 11, 2011 quake is that there was a magnitude 7.2 foreshock [on March 9], which is only 40 kilometers (km) away from the epicenter of the mainshock,” said Lin, who has studied large quakes extensively, including last year’s major quakes in Haiti and Chile.

“Foreshocks have been used previously as a tool for forecasting larger earthquakes,” he said. “I am sure that we will be looking closely at this and other foreshocks.”

The Araon started its mission in Christchurch, New Zealand, which experienced its own damaging earthquake this February. Now, heading back to Christchurch, it may encounter the remnants of the Japan tsunami—albeit perhaps barely noticeable at the ship’s current location. “Our cruise started with the Christchurch earthquake in New Zealand, and ends in sailing through a tsunami caused by the great Japan earthquake,” Lin said. 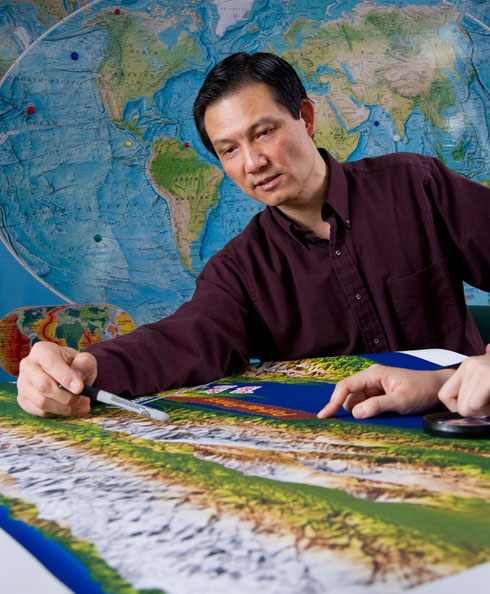 Jian Lin, a geophysicist at Woods Hole Oceanographic Institution, has worked extensively on earthquakes, studying the 1994 Northridge, 1999 Hector Mine, 2008 Wenchuan, China, and 2010 Haiti and Chile earthquakes. He has also conducted research on the submarine quake that sparked the devastating 2004 Indian Ocean tsunami, working as the first U.S. scientist ever invited to co-lead a Chinese deep-ocean expedition. (Image credit: by Tom Kleindinst, Woods Hole Oceanographic Institution.)

The magnitude 8.9 quake struck 125 km off shore and about 370 km northeast of Tokyo, Lin said.  It is likely to be the fifth largest earthquake ever recorded by instruments, he added.

Working on shipboard computers, Lin said that as of Friday afternoon, March 11, “I have already received notes of more than 40 aftershocks with magnitude greater than 5.8.

“One of the areas hit by the tsunami, Sanriku, was hit by previous tsunamis, including a tsunami caused by a 1933 magnitude 8.1 quake that killed 3,000 people, as well as the tsunami from the 2010 magnitude 8.8  quake in Chile,” he said.

He compared the current quake to the 1923 great Kanto earthquake of magnitude 7.9, which he said marked the beginning of modern seismology in Japan. “Although that was smaller than the current quake, it struck very close to Tokyo and Yokohama,” Lin said.  It caused more than 142,000 deaths and also caused a tsunami in the Sagami Bay with wave heights as high 20 to 39 feet in some areas.

McGuire and others have long been aware that a similar scenario could occur off the Pacific Northwest coast.

Led by McGuire, John Collins and Ken Peal, WHOI currently has ocean bottom seismometers deployed offshore of Vancouver Island to study the properties of the fault system there.

“Over the next five years, WHOI will be involved in the National Science Foundation’s Cascadia Initiative,” McGuire said. “This will be the first large-scale instrumentation of the fault offshore of Oregon and Washington that is capable of generating a magnitude 9 earthquake and tsunami.”

In the meantime, Lin and his colleagues are heading to Christchurch, having just finished a very successful cruise of hydrothermal, geophysical, and geochemical sampling cruise of mid-ocean ridge segments “that nobody has studied before,” he said.

Lin plans to survey the Christchurch earthquake zone and the widespread liquefaction before returning to WHOI on March 15.

After that, he will work with colleagues at the USGS National Earthquake Center in Menlo Park, Ca., to investigate both the Christchurch and Japan quakes.