Where the Earth’s Heat Comes From

What spreads the sea floors and moves the continents? What melts iron in the outer core and enables the Earth’s magnetic field? Heat. Geologists have used temperature measurements from more than 20,000 boreholes around the world to estimate that some 44 terawatts (44 trillion watts) of heat continually flow from Earth’s interior into space. Where does it come from?

Radioactive decay of uranium, thorium, and potassium in Earth’s crust and mantle is a principal source, and in 2005 scientists in the KamLAND collaboration, based in Japan, first showed that there was a way to measure the contribution directly. The trick was to catch what KamLAND dubbed geoneutrinos – more precisely, geo-antineutrinos – emitted when radioactive isotopes decay. (KamLAND stands for Kamioka Liquid-scintillator Antineutrino Detector.)

“As a detector of geoneutrinos, KamLAND has distinct advantages,” says Stuart Freedman of the U.S. Department of Energy’s Lawrence Berkeley National Laboratory (Berkeley Lab), which is a major contributor to KamLAND. Freedman, a member of Berkeley Lab’s Nuclear Science Division and a professor in the Department of Physics at the University of California at Berkeley, leads U.S. participation. “KamLAND was specifically designed to study antineutrinos. We are able to discriminate them from background noise and detect them with very high sensitivity.” 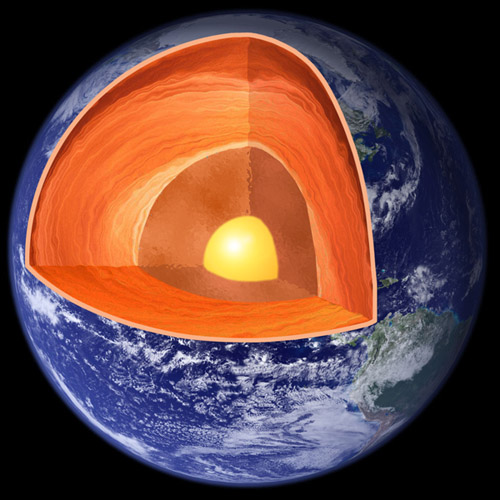 A main source of the 44 trillion watts of heat that flows from the interior of the Earth is the decay of radioactive isotopes in the mantle and crust. Scientists using the KamLAND neutrino detector in Japan have measured how much heat is generated this way by capturing geoneutrinos released during radioactive decay. Image credit: Lawrence Berkeley National Laboratory

KamLAND scientists have now published new figures for heat energy from radioactive decay in the journal Nature Geoscience. Based on the improved sensitivity of the KamLAND detector, plus several years’ worth of additional data, the new estimate is not merely “consistent” with the predictions of accepted geophysical models but is precise enough to aid in refining those models.

One thing that’s at least 97-percent certain is that radioactive decay supplies only about half the Earth’s heat. Other sources – primordial heat left over from the planet’s formation, and possibly others as well – must account for the rest.

Hunting for neutrinos from deep in the Earth

Antineutrinos are produced not only in the decay of uranium, thorium, and potassium isotopes but in a variety of others, including fission products in nuclear power reactors. In fact, reactor-produced antineutrinos were the first neutrinos to be directly detected (neutrinos and antineutrinos are distinguished from each other by the interactions in which they appear).

Because neutrinos interact only by way of the weak force – and gravity, insignificant except on the scale of the cosmos – they stream through the Earth as if it were transparent. This makes them hard to spot, but on the very rare occasions when an antineutrino collides with a proton inside the KamLAND detector – a sphere filled with a thousand metric tons of scintillating mineral oil – it produces an unmistakable double signal.

The first signal comes when the antineutrino converts the proton to a neutron plus a positron (an anti-electron), which quickly annihilates when it hits an ordinary electron – a process called inverse beta decay. The faint flash of light from the ionizing positron and the annihilation process is picked up by the more than 1,800 photomultiplier tubes within the KamLAND vessel. A couple of hundred millionths of a second later the neutron from the decay is captured by a proton in the hydrogen-rich fluid and emits a gamma ray, the second signal. This “delayed coincidence” allows antineutrino interactions to be distinguished from background events such as hits from cosmic rays penetrating the kilometer of rock that overlies the detector. 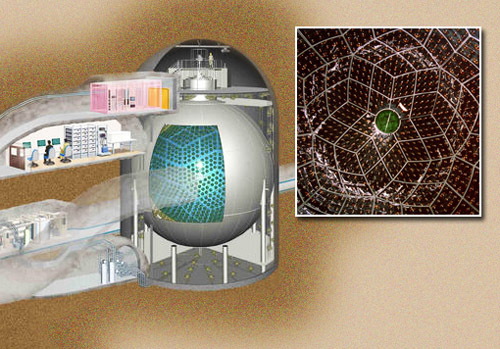 Says Freedman, “It’s like looking for a spy in a crowd of people on the street. You can’t pick out one spy, but if there’s a second spy following the first one around, the signal is still small but it’s easy to spot.”

KamLAND was originally designed to detect antineutrinos from more than 50 reactors in Japan, some close and some far away, in order to study the phenomenon of neutrino oscillation. Reactors produce electron neutrinos, but as they travel they oscillate into muon neutrinos and tau neutrinos; the three “flavors” are associated with the electron and its heavier cousins.

All models of the inner Earth depend on indirect evidence. Leading models of the kind known as bulk silicate Earth (BSE) assume that the mantle and crust contain only lithophiles (”rock-loving” elements) and the core contains only siderophiles (elements that “like to be with iron”). Thus all the heat from radioactive decay comes from the crust and mantle – about eight terawatts from uranium 238 (238U), another eight terawatts from thorium 232 (232Th), and four terawatts from potassium 40 (40K).

KamLAND’s double-coincidence detection method is insensitive to the low-energy part of the geoneutrino signal from 238U and 232Th and completely insensitive to 40K antineutrinos. Other kinds of radioactive decay are also missed by the detector, but compared to uranium, thorium, and potassium are negligible contributors to Earth’s heat.

Additional factors that have to be taken into account include how the radioactive elements are distributed (whether uniformly or concentrated in a “sunken layer” at the core-mantle boundary), variations due to radioactive elements in the local geology (in KamLAND’s case, less than 10 percent of the expected flux), antineutrinos from fission products, and how neutrinos oscillate as they travel through the crust and mantle. Alternate theories were also considered, including the speculative idea that there may be a natural nuclear reactor somewhere deep inside the Earth, where fissile elements have accumulated and initiated a sustained fission reaction.

KamLAND detected 841 candidate antineutrino events between March of 2002 and November of 2009, of which about 730 were reactor events or other background. The rest, about 111, were from radioactive decays of uranium and thorium in the Earth. These results were combined with data from the Borexino experiment at Gran Sasso in Italy to calculate the contribution of uranium and thorium to Earth’s heat production. The answer was about 20 terawatts; based on models, another three terawatts were estimated to come from other isotope decays.

This is more heat energy than the most popular BSE model suggests, but still far less than Earth’s total. Says Freedman, “One thing we can say with near certainty is that radioactive decay alone is not enough to account for Earth’s heat energy. Whether the rest is primordial heat or comes from some other source is an unanswered question.”

Better models are likely to result when many more geoneutrino detectors are located in different places around the globe, including midocean islands where the crust is thin and local concentrations of radioactivity (not to mention nuclear reactors) are at a minimum.

Says Freedman, “This is what’s called an inverse problem, where you have a lot of information but also a lot of complicated inputs and variables. Sorting those out to arrive at the best explanation among many requires multiple sources of data.”

KamLAND is supported by the Japanese Ministry of Education, Culture, Sports, Science and Technology and the U.S. Department of Energy’s Office of Science.