It takes rocket science to launch and fly spacecraft to faraway planets and moons, but a deep understanding of how materials perform under extreme conditions is also needed to enter and land on planets with atmospheres.

X-ray science is playing a key role, too, in ensuring future spacecraft survive in extreme environments as they descend through otherworldly atmospheres and touch down safely on the surface.

Scientists at the Department of Energy’s Lawrence Berkeley National Laboratory (Berkeley Lab) and NASA are using X-rays to explore, via 3-D visualizations, how the microscopic structures of spacecraft heat shield and parachute materials survive extreme temperatures and pressures, including simulated atmospheric entry conditions on Mars.

Human exploration of Mars and other large-payload missions may require a new type of heat shield that is flexible and can remain folded up until needed.

Candidate materials for this type of flexible heat shield, in addition to fabrics for Mars-mission parachutes deployed at supersonic speeds, are being tested with X-rays at Berkeley Lab’s Advanced Light Source (ALS) and with other techniques.

“We are developing a system at the ALS that can simulate all material loads and stresses over the course of the atmospheric entry process,” said Harold Barnard, a scientist at Berkeley Lab’s ALS who is spearheading the Lab’s X-ray work with NASA. 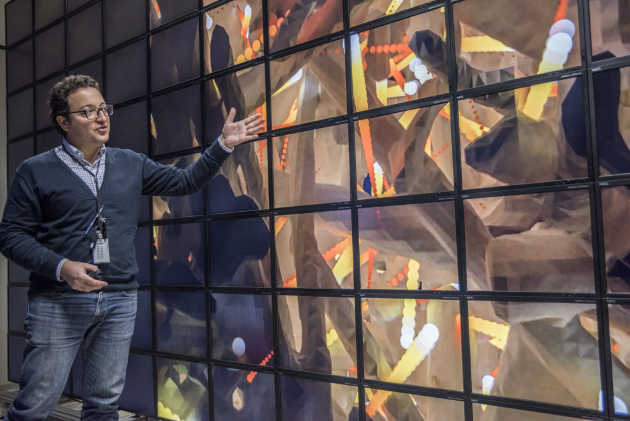 The success of the initial X-ray studies has also excited interest from the planetary defense scientific community looking to explore the use of X-ray experiments to guide our understanding of meteorite breakup. Data from these experiments will be used in risk analysis and aid in assessing threats posed by large asteroids.

The ultimate objective of the collaboration is to establish a suite of tools that includes X-ray imaging and small laboratory experiments, computer-based analysis and simulation tools, as well as large-scale high-heat and wind-tunnel tests. These allow for the rapid development of new materials with established performance and reliability.

This system can heat sample materials to thousands of degrees, subject them to a mixture of different gases found in other planets’ atmospheres, and with pistons stretch the material to its breaking point, all while imaging in real time their 3-D behavior at the microstructure level.

Researchers at ARC can blast materials with a giant superhot blowtorch that accelerates hot air to velocities topping 11,000 miles per hour, with temperatures exceeding that at the surface of the sun. Scientists there also test parachutes and spacecraft at its wind-tunnel facilities, which can produce supersonic wind speeds faster than 1,900 miles per hour.

Michael Barnhardt, a senior research scientist at NASA ARC and principal investigator of the Entry Systems Modeling Project, said the X-ray work opens a new window into the structure and strength properties of materials at the microscopic scale, and expands the tools and processes NASA uses to “test drive” spacecraft materials before launch.

“Before this collaboration, we didn’t understand what was happening at the microscale. We didn’t have a way to test it,” Barnhardt said. “X-rays gave us a way to peak inside the material and get a view we didn’t have before. With this understanding, we will be able to design new materials with properties tailored to a certain mission.”

He added, “What we’re trying to do is to build the basis for more predictive models. Rather than build and test and see if it works,” the X-ray work could reduce risk and provide more assurance about a new material’s performance even at the drawing-board stage.

Francesco Panerai, a materials scientist with NASA contractor AMA Inc. and the X-ray experiments test lead for NASA ARC, said that the X-ray experiments at Berkeley Lab were on samples about the size of a postage stamp. The experimental data is used to improve realistic computer simulations of heat shield and parachute systems.

“We need to use modern measurement techniques to improve our understanding of material response,” Panerai said. The 3-D X-ray imaging technique and simulated planetary conditions that NASA is enlisting at the ALS provide the best pictures yet of the behavior of the internal 3-D microstructure of spacecraft materials.

The experiments are being conducted at an ALS experimental station that captures a sequence of images as a sample is rotated in front of an X-ray beam. These images, which provide views inside the samples and can resolve details less than 1 micron, or 1 millionth of a meter, can be compiled to form detailed 3-D images and animations of samples.

This study technique is known as X-ray microtomography. “We have started developing computational tools based on these 3-D images, and we want to try to apply this methodology to other research areas, too,” he said.