What’s so Unique About the Tropics?

“Less than we thought,” researchers say in a new study providing insights into the distribution of biodiversity across the globe.

The temperate forests of Canada or Northern Europe may have much more in common with the tropical rainforests of Southeast Asia or South America than previously believed, according to a research group including a University of Arizona ecologist.

The assertion, published as the cover article in the journal Science, is focused on the concept of “beta-diversity” – a measure of the change in species composition between two sites, such as neighboring patches of forest. High beta-diversity means that two given sites have few species in common.

Typically, beta-diversity increases when moving further from the poles toward the equator, often leading ecologists to conclude that there is something inherently different about the ecology of the tropics that leads to greater turnover of tropical species from place to place. 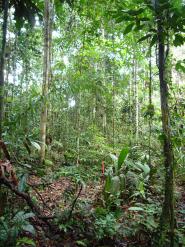 But a group led by Nathan J.B. Kraft, a postdoctoral fellow at the University of British Columbia’s Biodiversity Research Centre, challenged this interpretation, using an extensive dataset of tree inventories from around the world and archived at UA.

Brad Boyle, a postdoctoral fellow in Brian Enquist’s lab at the UA’s department of ecology and evolutionary biology, supplied data he collected along transects in mountain ranges in Ecuador.

“The problem that has plagued ecology for a long time has been that local samples only measure how many species are found in that particular patch,” Boyle said. “But the explanation for the diversity gradient along latitudes seems to lie within the processes that govern patterns of speciation and extinctions across large geographical scales.”

For example, even though scientists don’t know this yet for sure, it could be that extinction rates are greater in higher latitudes compared to the tropics.

Using computer modeling, they demonstrated that current patterns of beta-diversity in the tropics and the temperate zone are much more similar than ecologists once thought.

Kraft and colleagues found that the crucial factor in shaping beta-diversity at large scales is how many species are present in the region in the first place.

Once they accounted for these differences, the resulting beta-diversity patterns were the same in forests at tropical and temperate latitudes. They found the same consistency between high and low elevations in mountain regions.

“It was believed that something ‘extra’ must be going on in the ecology of the tropics to produce greater beta diversity there,” said Kraft, who will become an assistant professor at the University of Maryland next year.

“We now see that the patterns can all be explained not by current ecological processes, unfolding over one or two generations, but by much longer-term historical and geologic events,” Kraft added.

Boyle said: “Despite hundreds of studies and decades of research, scientists still have a hard time getting a grip on explaining the latitudinal diversity gradient. With this paper, we are now able to isolate true beta diversity from sampling artifacts and are limited merely by data.”

He also said: “With the huge biodiversity databases currently coming online, we are at the brink of having enough data to test whether the pattern we observed holds up at larger scales as well.”

Kraft’s group included researchers from institutions in the U.S., Canada, Panama and New Zealand and was supported by the U.S. National Center for Ecological Analysis and Synthesis and the U.S. National Science Foundation.

“We were surprised to see that the causes of these patterns might actually be a lot more simple and share a lot more in common than we first thought,” Kraft said.

“For decades now, ecologists have gone to the tropics to try to explain the often incredibly high diversity found there,” Kraft also said. “But what our results show is that the same ecological mechanisms might operate in similar ways in Costa Rica and Calgary.”

– By Brian Kladko and Daniel Stolte